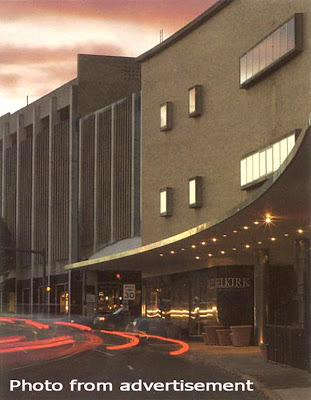 Inside the September issue of Vanity Fair (whose cover asks “Carla Bruni: The New Jackie O?” to the sound of a million eyes rolling) is a special advertising section called St. Louis Luxury Living. Within this section is an ad for Ivey-Selkirk Auctioneers, featuring the photo shown above.

Gorgeous photo (wish there was a photo credit) of a gorgeous building that started life as the first Famous-Barr in St. Louis County, from 1948 to 1991. It’s heartening to see a good building continually appreciated by being continually occupied and loved by its occupants.

I worked in the downtown Famous-Barr advertising department from 1988 to 2001. The building and its history always enchanted me, from grade-school adventures to see the Christmas windows to my tenure inside as an employee. Famous-Barr sold to Macy’s and then Macy’s shut down the advertising department (along with the headquarters a few floors up), with the last advertising troopers turning off the lights as they left at the beginning of July 2008.

It saddens me to think of that advertising department – which was there since the 1920s – gone for good. But at least the building is still there. 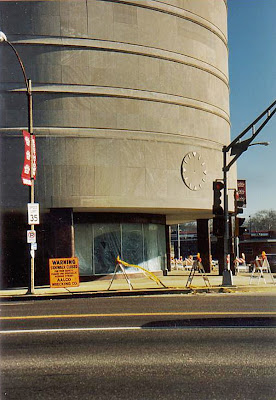 This week, the Suburban Journals ran a piece recounting the day the Southtown Famous-Barr opened in 1951. Jim Merkel’s “This Week in South Side History” is a regular feature, and he deserves a large round of applause for his consistent coverage of the South Side built environment.

The only thing missing from the article is photos of the Southtown Famous. So I dug out some photos I took on Christmas Day 1994, during the demolition of the building (shown above and below). That massive lot sat vacant for so long that I lost sense memory of the building, but the photos brought it all back. It really gave the Kingshighway/Chippewa intersection a “here’s where it’s all happening” feeling one only experiences in densely packed and deeply loved urban neighborhoods. 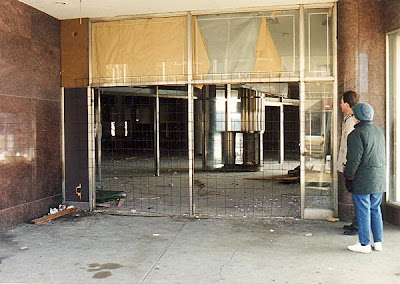 One interesting thing in the Journal article is the sickening sense of deja vu.

“I believe this beautiful structure signifies the confidence held by business leaders throughout the nation in the people of St. Louis. Here we have an outstanding example of the company’s recognition of the economic possibilities to be developed in St. Louis.”
– Mayor Joseph Darst

These quotes are from 1951, a year after a peak population of 856,796 in St. Louis City. Yet it still reeks of the exact same low-self esteem statements made by our current Mayor & Co. to this very day. Meaning, even when this city was top of the heap it felt bottom of the barrel?

From where and why does this city have such chronic low self-esteem issues? It works like negative manifesting and is, frankly, unattractive and undeserved. Is there a clandestine and long-standing political plan to keep this city in a meek and groveling state of mind? Is it a certain generational mindset passed on down? Is it an unforeseen backfiring of St. Louis humility and gentility?

If anyone has any plausible theories on St. Louis Self Esteem origins, I’d love to hear them.