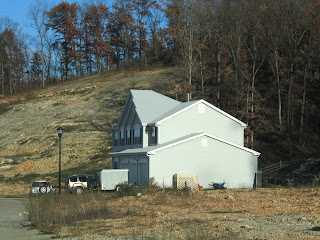 I had some time to kill while in Fenton, and in the spirit of “lovin’ to hate it,” I cruised through some of the new home developments. Nowadays, with the new home building industry choking, it’s even sadder than usual to drive through these places. Lots of suspended animation, and little signs poking out of dirt mounds proclaiming what would have been.

In the distance I saw the site shown above.
1st Thought: They pretty much have a solitary wilderness view at this point. Too bad there’s no windows on that side of the house.
2nd Thought: I’m totally hallucinating, right? 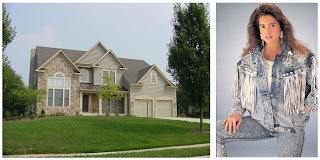 Profusions of triangles on the front facades of new homes are exactly like acid wash denim. 1988 was the apex of frosted denim frenzy, and 2008 is shaping up as the peak moment of needless peaks. 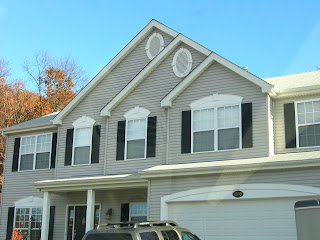 LOOK AT THIS!!!!!
I swear they’re purposely yanking my chain here, havin’ a laugh at my expense. Going back to the first photo, these peaks are not even articulated. It’s just flat, repetitive triangles because Test Market Central says that’s what sells new homes? As if trying to disguise how cheap and bloodless this is, they attempt a secondary design motif with the two round attic vent covers. As if adding a third one would have been overkill.

I am counting on this economic time-out forcing new home builders to come up with some new cosmetic gimmicks to exploit, because the triangle is now as played out as Electric Youth.