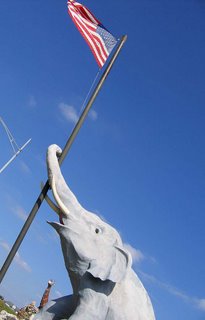 Former Noah’s Ark Restaurant
Hwy 70 & Fifth St. Exit, St. Charles, MO
Upon hearing the news that Noah’s Ark was going to be torn down to make room for an aquatic center , pictures of the remains were required. 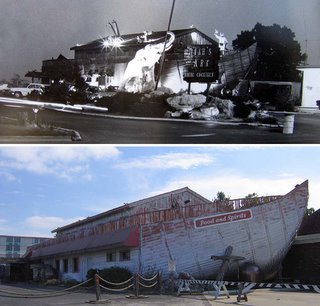 The place opened around 1966, and to grade-schoolers Noah’s Ark was Mecca. It had giant fiberglass animals, a killer kids menu, kiddy cocktails to match your folks drink for drink, and the waitresses passed out plenty of cheap plastic, animal-shaped doo-dads to keep the tots distracted until the macaroni and cheese arrived. I’m going on word of mouth about this because, sadly, I never went to Mecca when it was hopping (above, top). I was about the only kid I knew who was cruelly denied the thrill. I simply stared at it longingly from the car as we sped past it on the highway.
Actually, the November 2005 visit (above, bottom) was my first visit. I’m a late bloomer… 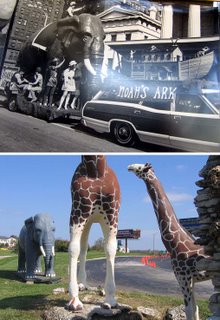 The restaurant has been closed since at least 1996, and the animals were herded away from the ark and scattered about the parking lot (above, bottom). While the place has occasionally been used as a Halloween haunted house (4th item down), it sat vacant for years. This is prime real estate, so that it remained untouched for so long is surprising. Maybe sentimentality played a part in it lingering in limbo for so long.

Still hanging at the entrance are some framed photos of the place in its heyday. Sun-faded photos feature Milton Berle as a celebrity guest, parade floats in downtown St. Louis (above, top) and many shots of the cavernous dining room cram packed with diners. 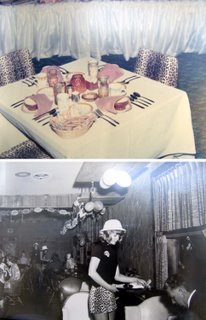 From the makeshift hanging scrapbook, glimpses of the interior show (above, top & bottom) that the leopard print chairs matched the waitresses mini-skirts, which is hubba hubba in a pre-Hooters way. Also note that they were made to wear safari pith helmets, which is way cool. 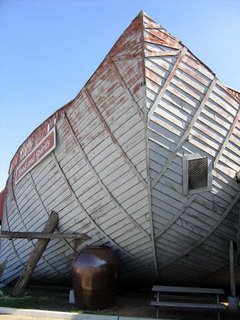 From this angle, the fading remains of Noah’s Ark looks vaguely similar to Le Corbusier’s Ronchamps… 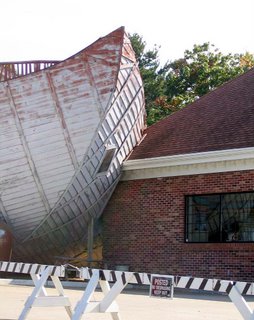 …but actually, a brick gas station pierces the hull like an iceberg (above). The Ark looks as if it crashed ashore to stock up on Twizzlers and Pepsi before the 40 days of rain really kicked in hard. 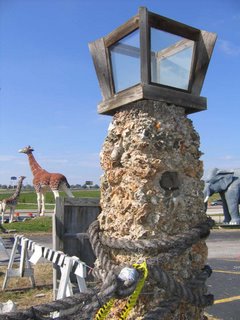 Even as the gas station invaded, and a hotel ate up the parking lot, the powers that be let most of the Ark’s remains stand undisturbed, including the too-ugly-for-words lamp post (above). There’s a curious magic to the place, and maybe the new tenants could keep the animals; elephants fit in with the aquatic theme, and kids find giraffes therapeutic, right?