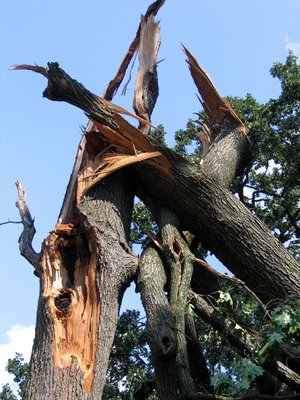 Aftermath of 7.19.06 Storm
South St. Louis, MO
Ahh, the sheer decadent luxury of electricity… it’s back on and it’s fabulous!
The house sat for 3.5 days without power, and even though it’s back on, I’m treading lightly around it, running appliances on rotation so only one works at a time. Hoping by me not using so much, some other people have a quicker chance of getting their power back up.

That storm was creepy enough to earn every big fish story we’ll hear about in perpetuity. Violent winds roaring in 4 directions at once… look at the tree pictured above; like twisting licorice. 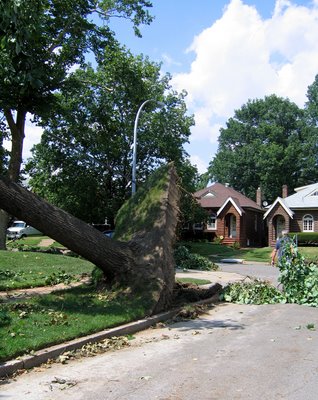 The Most Vivid Memory That very moment the storm finally passed; 1 minute of vast silence collapsing in on itself punctured by fire, police and ambulance sirens wailing across the entire city. 10 minutes after that, the sound of screaming chainsaws filled my neighborhood. Oh, chainsaws… that’s not a good sign.

The Most Gut-Wrenching Sites That Tasmanian Devil wind treated trees like handles on cabinet doors, with the “doors” being our terra firma (see above photo). Trees in attics, in alleys, in cars. Thursday morning, it was like driving through a green snowstorm, forging a path through tree guts to powerless, lawless intersections. Starving, I try to stop at a downtown Kirkwood McDonald’s, which looked like a refugee camp. 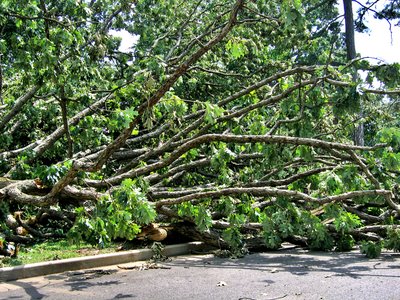 It took me 2 days to work up the courage to drive through Carondelet Park (above and very top photo), and then it wounded me so bad I fled in a panic. It looks like Zeus threw a temper tantrum, a larger-than-life destruction that only Mother Nature and her cronies are capable of.

The Best Relief Effort KDHX. They, too, lost power, but then hooked up one generator to power just one mike, just on CD player. For 3 days, the volunteer DJs sat in a dead building turned oven and talked straight to us, played music for us. No phones, so people would come in off the street to Paul Revere news updates. KDHX was a singular, life-affirming joy, and everyone who relied on them during this post-electric chaos had better be pledging at least $88 come next pledge drive.

The Best Line From A Friend Baking in a House with No Power “No traffic lights, no street lights, but down the street the Tan Co. is just blazing away in all its neon purple glory! I wanted to walk in and ask, ‘Hey, could I heat up some pizza rolls in one of the beds?’ “ 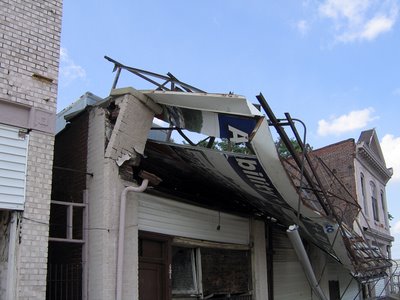 The Best Symbolism On a truncated street just north of the Tower Grove/Vandeventer intersection, the wind collapsed a billboard into a graceful arc. I have an extensive photographic history with this 1/2 block (and will share that saga shortly), and just as I was digging in to document the above, my digital camera batteries went dead. It perfectly summed up 3 days worth of no-power issues.

And it bears repeating… I’m so grateful to have power back, that my entire block finally has power back. It feels like being baptized by The Church of the EverReady Kilo Watt. I am born again, amen.

One thought on “Ridin’ the Storm Out”