Bravo to Steve Patterson for this achingly good re-think of how Loughborough Commons could have been. This plan – and the other ideas it inspired – is so damn good that I can picture myself there, lovin’ it. Now I’m absolutely irritated that we don’t have something as utterly cool as this. Makes the waste of such a humungous piece of urban land even more galling and sad.

Hey, Desco, does anything in the Urban Review plan make you smack your forehead with a “D’oh!”? Perhaps a “shit” hissed under your breath as you realized the profit potentials completely missed because of stilted copy cat thinking? At least try to contemplate more logical ways of doing things, and then check this out. 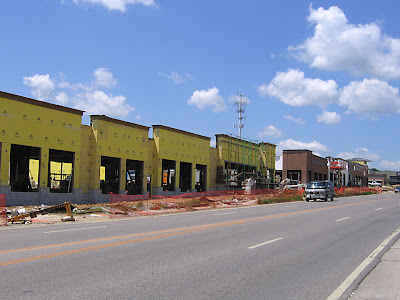 This is what used to be at the location shown above.

I adored it. It was senselessly demolished. That still irritates me. So, there’s no disguising my dislike for anything Market at McKnight.

So, I don’t actually “see” the buildings so much as I see how they are placed. The above photo is looking west down Manchester, and all buildings as far as the eye can see are part of this new plaza. And they are up against the street!

This part of Manchester has never looked like this. Rock Hill was the manifestation of the mid-century suburban ideal. Most of the buildings are in First Period Automobile, meaning buildings that were purposely designed with a strip of single-width parking directly in front to accommodate motorists. Hell, that’s the very reason they put the dearly departed double bat wing at this intersection: It Was Motor City.

This is also a part of town where sidewalks are very erratic, if they exist at all. Because the original line of thinking had been: who needs sidewalks in the car-centric ‘burbs? But suddenly, here is a new version of the strip mall forcing sidewalks to be poured because it’s pushing the curb?
How bizarre. 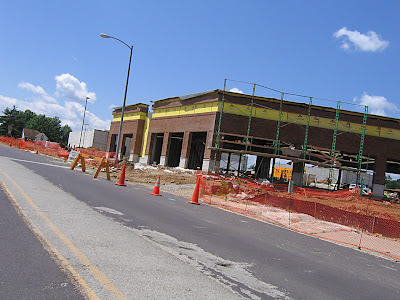 They even carry part of this “urbanity” up Rock Hill Road (above), putting mass where mass never was before. Sure, they blow the use of the actual corner with what I mentally refer to as the Phillips 66 Double Wing Memorial Park & Mausoleum. Unless it transforms into an elaborate bus stop, ain’t a single soul that will ever use that prime piece of real estate. But, hey, not my problem…

So, suburban Rock Hill goes “urban” while current and planned retail developments in the city are just clapped out retreads of interstate design that’s been boring customers since the late 1990s. The lack of emotional and financial intelligence on the part of our City Money Fathers can sometimes manifest itself as silly smear slogans, which just prove they don’t get it, and stubbornly refuse to get it. Then I read the following, which is so correctly and brilliantly put that anyone can understand it:

There are few harsher indictments against architecture than the sadness we feel at the arrival of the bulldozers, for our grief is, in almost all cases, fuelled more by a distaste for what is to be built than by any hatred of the idea of development itself.
Alain de Botton, The Architecture of Happiness

The above passage already has an editorial comment, courtesy of Bohemian Hill: 2 thoughts on “Alternatives To The Absurd: Retail Development”