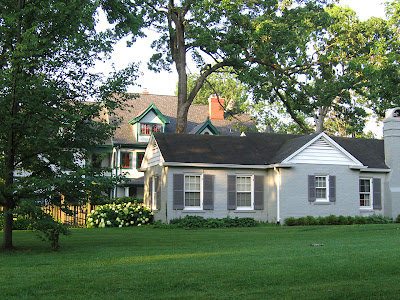 East Monroe Avenue, Kirkwood MO
Does it seem like we’re being watched?
It kinda feels like someone is breathing down my neck.
Is my privacy being violated, or am I just paranoid?

There is Teardown Fever in Kirkwood. I swear to you that every other block has at least one house demolished to build anew. These new developers deserve a prop: They leave up as many trees as possible. They even fence off what is to be saved so no accidental bulldozing happens. Not sure if it’s a Kirkwood City Hall requirement, or just some really savvy home builders. Either way, it’s an appreciated gesture. 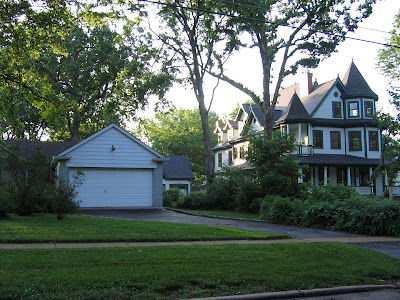 But in the case of the in-fill home pictured above right… I hope the people in the single-story Grey House know the owners of the new Victorian mansion being built right up against it. And know them well enough to not mind being seen by them in their underwear. If they don’t know each other, the back side of the Grey House may be awfully dark with the blinds drawn 24/7.

The new Victorian’s front does face out onto the side street, but it has a rather broad, tall and looming north side that pretty much bullies the house in front of it. The Victorian’s detached garage is even right up against the Grey House backyard fence. Nothing stopped it from being built like that, so I guess no zoning laws are being violated.. other than privacy.