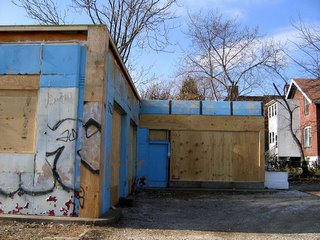 South Kingshighway @ Murdoch
South St. Louis, MO
Tom, of Pretty War STL, got an ultimate shot of this place back in July. And I agree with his assesment that it was once a gas station, based on left over concrete fixtures on the lot, and what looks like an enamel porcelain facade that’s been painted over a gazillion times. 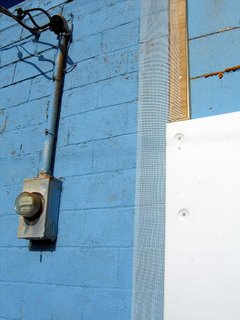 As of late fall, someone is redeveloping the building. Sheets of foam insulation in preparation for a new facade, fresh plywood in the windows, and a small handful of trucks in the parking lot are all sure signs of renewal.

I hung out in the artic freeze for quite a bit, hoping a member of the crew would poke their head out so I could pepper them with questions. I’m fearless about pumping folks for information, but only if they appear before me. I will not (usually) go out of the way to bother someone, especially if they’re working. But I am burning with curiosity…

Until the story reveals itself, I leave you with a miniature art exhibit entitled: Blue Renewal Abstracts. 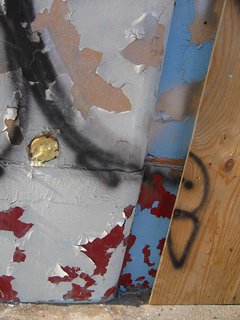 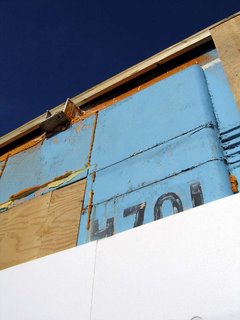