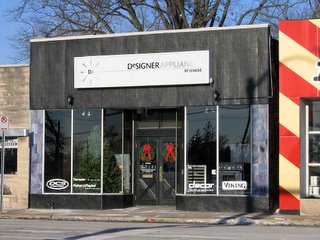 At one point, this storefront was obviously goregous. But time speeds forward, remodeling happens. For some reason, every owner has decided to keep the vertical columns of varigated purple art glass, maybe as a reminder of former aesthetic glory.

The new owners were smart to pick gloss black paint for all the tacked-on wood cover-up. It certainly does look much better than the previous color (above) that somehow tried to both coordinate with, and minimize, the art glass. But there truly isn’t much anyone can do with that barn plank marquee. Considering that the new tenant is selling uber-expensive appliances to people constructing Just For Show kitchens, maybe they will make enough profit to properly resurface the storefront.

And on the topic of surface treatments, lets move just one block away to… 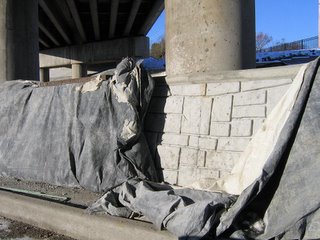 B.E.L.T. Rule #1: Always Carry The Camera.
B.E.L.T. Rule #2: Violate Rule #1 and suffer the consequences.
So I missed a shot of the road crews actually installing the “rock walls” around the overpass concrete columns. I only have this shot (days later) of a grift-in-progress.

It’s not rock. It’s sheets of white plastic molded to look like rock that is then sprayed with a chalky grey paint that perfectly simulates rock in that theme park kind of way.

The site of a construction crew staple-gunning sheets of fake white rock shocked me so that I nearly crashed into it. But luckily, crashing into a Frisbee would not hurt my car. Is this the highway safety rationale behind this dubious finish choice?

There is no shame in a material being what it is; there is a certain majesty to material honesty. But it’s maddening when a material is forced into a life of deceptive servitude, pretending to “be” wood, plaster or rock. Any material that’s been molded to look like something else automatically implies “the budget’s too tight for integrity.”

MoDot suggests the fake brick bibs (scroll down to the last letter) it trotted out for the Hwy 70 overpass reconstruction in North City.
Nah, brick is sooo Downtown St. Louis. Got anything classier?
Why yes! Plastic!
Ah, yes, plastic. Nothing says class better than a silk purse from a sow’s ear. Let’s do it!

America’s muscular interstate system is built of blacktop, steel and concrete. To beautify any portion of such a utilitarian means to an end is thoughtful, but not necessary. But to gussy it up with Leggo Limestone is just pretentious and flat out silly.