3819 South Grand, near Chippewa
St. Louis, MO
We can watch How Buildings Learn if we leave them be, unfolding organically with passing time. A good building will always be useful, if not always aesthetically correct. We’ve all seen atrocious new facades slapped onto old commercial buildings (the cedar shingle craze of the early 1970s is horrifying), but we’re also blessed with graceful re-dos (Vitrolite storefronts in the 1930s & ‘40s) and bold transitions, like the building above. 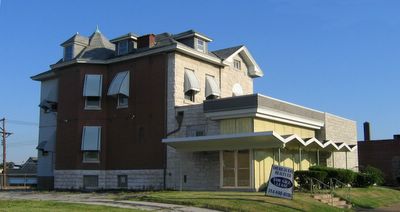 I wish I knew more about this building than what is apparent. A 3-story turn-of-the-20th house became pregnant with a commercial building. No cheesy attempts to integrate the traditional with the modern were tried; each part was left to be what it needed to be. And the addition is an ultra-modern structure that I love a little too much. Its simple lines are writ large and confident, its textures both radical and respectful of the house it nurses on. Remove it from this spot, plop it anywhere else (Palm Springs) and it would still radiate jet set dentist cool. 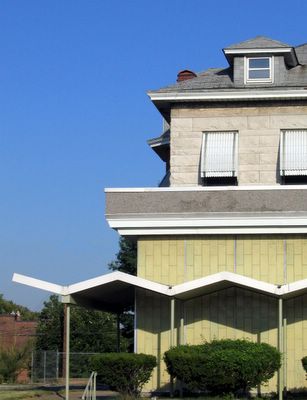 The place has been spit shined (though I miss the green vines crawling up the yellow plastic screen wall) and put up for sale. There’s not a chance in hell that this building will remain as it has grown. Should a new owner decide to faithfully rehab the house, the Chevron Charmer is toast. Please let it be for sale for quite a long time. 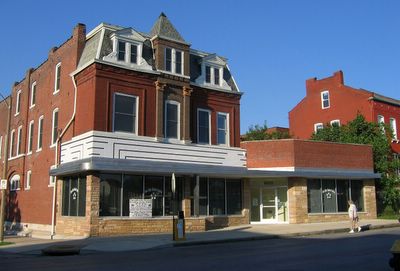 Five Star Senior Center
2832 Arsenal, St. Louis, MO
Just a scootch east of Gravois is this beauty, an architectural trifecta.
From top to bottom: 1890’s, 1930’s, 1950’s.
It’s an intriguing history of shop owner renovations, with each new layer preserving just enough of the previous to make it an affectionate family scrapbook. 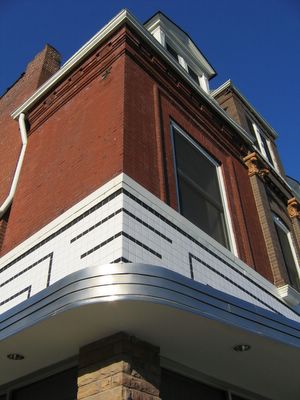 While taking these photos, folks started arriving at the building, and one of them turned out to be the building’s owner, who was genuinely happy to meet someone who got its charm. Michael W. Howard is executive director of Five Star Senior Center, a not-for-profit that provides meals, transportation and social activities. When he bought the building to renovate into Five Star’s new home, the city wanted him to peel it back to its 1890 self. Mr. Howard wanted to keep it as is, and challenged the city to come up with proof of what it once looked like.

At this point I mentally flipped out: This man put up a fuss to keep this building as it grew!? He’s my new hero!
Not only did the city let him be, but he worked with Grubbs & Associates architects to polish up the multiple exteriors and to fully gut and renovate the interior of the ground floor.
Oh, man, he’s architecturally god-like!
I was slightly dazed with awe when he gave me a tour of the inside. It was designed with a strong and tasteful open plan, with gorgeous morning light streaming into the front sitting room and administrative offices. Expansive entry arches and substantial moldings flowed back through to the large dining hall. Upon complimenting him on how thorough and handsome the details are, he said he didn’t want to just slap up drywall and partitions, he wanted to do it properly, which is why he hired an architect (not a contractor, but an architect) to help him with his intent for the place.

And because of this kind of thought about the environment he wanted to create for the seniors, he created a space that felt alive and welcoming, full of self-esteem and smiles. Mr. Howard has added another chapter to the story of this building, allowing it to continue unfolding. Bravo! 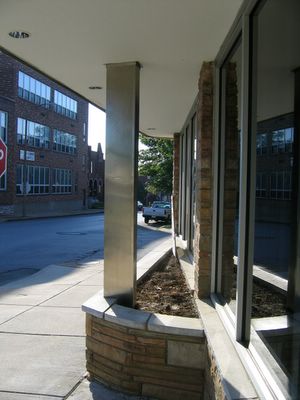