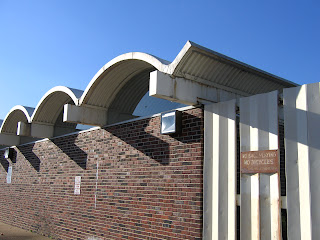 Gravois Avenue & Taft
South St. Louis MO
Here’s a wallflower building that I admire. Maybe by driving down Gravois you better recognize it from this angle: 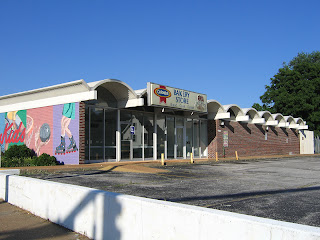 The “WonderKids” mural is distinctive and colorful, and until a few years ago, it was a Colonial Thrift Store, which lends it a sweet memory association. City records say it was built in 1967. Something this unabashedly modern simplistic in this area at that time had, perhaps, a slightly glamorous original tenant? According to city directories, it has always been a Colonial thrift store. It’s unusual for a city building to retain the occupant that built it for that many decades, so that’s a pleasant surprise. 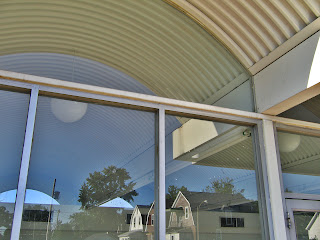 What’s not so pleasant is that the ground story windows have recently been boarded up. The clerestory windows in the undulating row of arches on both long sides of the building (I love the uninterrupted view from front to back) are now smashed and shattered.

A worrisome thought is that its owned by the same people who own most of the buildings along the stretch of Brannon between Fyler and Arsenal. There, they have a chain of striking mid-century modern factories (and an early century building that burned) that, even when occupied, are in a distressing state of decay. So, this doesn’t create much hope that the Colonial Thrift Store will be actively seeking a new use, and that’s a shame because it caps off a newly-thriving part of Gravois (thanks to the Bosnians) and can be easily converted for most any use.