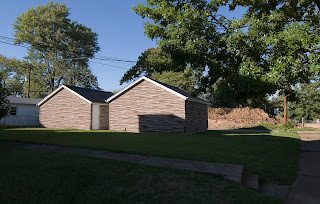 Coronado & Burgen, South St. Louis MO
The simple twin geometry of the garages (above) in the late summer spotlight had my attention, but the large mound of dirt behind them caused a distraction. Who can resist a huge pile of dirt? It means something’s up that must be investigated. 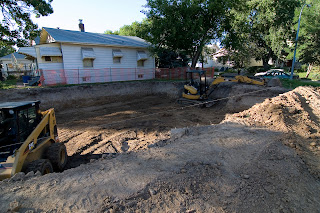 Where there’s a dirt hill will always be a hole, and this is a good one. On this corner plot in Holly Hills was previously a simple home turned to crap by the final owners. It was a throbbing boil in the neighborhood, and when it was demolished, you know the neighbors breathed a sigh of gratitude. Then the lot sat vacant for just about a year, which was plenty of time for daydreaming.

There’s been almost no new in-fill housing in Holly Hills. The original housing stock is still sturdy, attractive and desirable, so they don’t get demolished, only remodeled. I’ve been longing for something like this to be inserted into the spot. Build something small to fit the scale of the direct surroundings, affordable and modestly modern in shape. 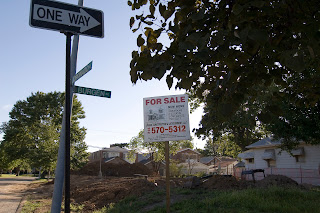 Take a look at the sign above for an illustration of what’s actually going in. It’s bordering on an “uh oh.” The square footage is suitable for the lot, but I’m assuming the 2 car garage will be attached, which doesn’t match the rest of the neighborhood. There are 2 story single-family houses in the ‘hood, just not in this immediate vicinity (though some are 1.5 stories), so its height will stick out just a tad, but it’s no big deal. The drawing looks harmless enough, but finish materials usually sour the finished product.

Our alderman, Fred Wessels, 13th ward is pretty good to us in that he causes no harm and has a genuine interest and feel for built environment issues. It’s encouraging that he snagged a new home construction during this lousy market downspin, so the whole idea is a bit exciting. So, I’ll keep a camera eye on the progress, and hope for the best.