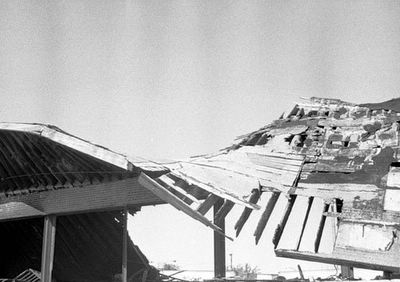 Ecology Of Absence found the above in August of 2004, and wrote that if anyone had any other info or photos, please contribute.
Eureka!
In September & October of 2003, I obsessed over these remains, trying to take THE perfect shot of it. The swoop and flow of that roof was so poetic. But be it black & white or color film, morning or afternoon light, I just couldn’t properly capture the sad, suspended drama of it.
I felt a slight sense of relief when the east half of the roof finally slumped to the ground. I could let go of the impossible shot. 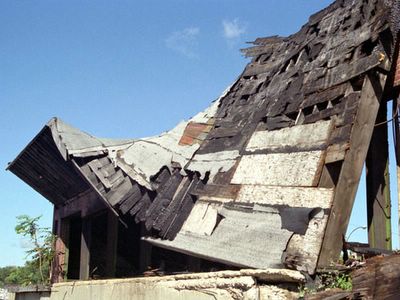 P.S. to EOA: I also have a shot of the mural. I lived across the street from it (above what is now The Royale) for 4 years. It’s buried in a pile of photos from the mid ’90s. When I get the courage to do the time warp again, I’ll pass along the memory of the mural’s florid beauty.