Driving through Town and Country, Missouri, the lopsided sight above is increasingly common. The death vibe hangs over any ranch that rests within sight distance of an overdeveloped profusion of triangle points that are the current rage in new home building. The more McMansions in the area, the greater the chance the ranch is toast, and what does it feel like to live in a Death Row home? Is there a will to survive or a rubbing of hands over the cash-out possibilities? 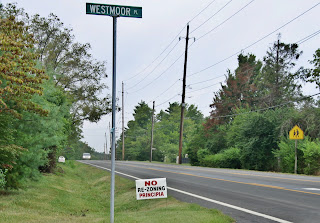 Drive a little further and what pops into view (above) is the community’s reaction to the news that Principia is considering the sale of some of its property for either residential or mixed-use development. There’s a double standard at play here. Town & Country has no reported problems with homes on private property being demolished to make even bigger homes, but it does have a problem with vacant private property desiring something similar. It’s confusing because it’s all private property and owners’ rights prevail, especially in the free market real estate bonanza of desirable zip codes such as this.

Regardless of my confusion, I am touched by the visible groundswell of protest among T&C citizens. They jumped on this quick, dotting most every quarter mile of Clayton Road with thumbs down signs, and I wonder if this community’s uncharacteristic protest was emboldened by the development protesters in Kirkwood, Missouri. 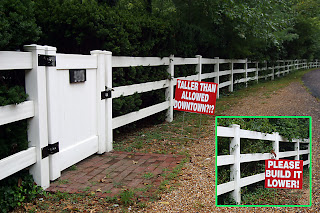 Kirkwood homeowners have spent most of 2007 trying to solve their dis-ease over the escalating tear down & infill frenzy taking place. But their tipping point was the sale and destruction of 407 East Argonne to one of the more prolific new home builders working the area, and they responded with dozens of red yard signs addressing the would-be new owner of the coming McMansion with “Don’t Buy 407 E. Argonne.”

There is now a continuing (collect all seven!) series of signs peppering most all of Kirkwood; the lawns display far more yard signs than during the most heated elections. While not everyone in the town is political, they are all effected by what happens to the homes around them. With the recent demolition of the cause of the yard sign campaign, they’re even angrier and aren’t about to shut up about it.

I was particularly taken with two of the newest signs shown above because, in essence, aren’t these bordering on aesthetic protests? 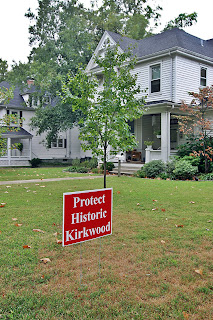 The Kirkwood citizens concerns started with developers pushing new homes to the brink of property lines for more square footage, then it advanced to the inappropriate scale of in-fill housing. Both are zoning issues that are being tackled by public due process. But what made them so angry about one beloved home when so many others have vanished in the last three years?

I’ve overheard and talked with dozens of Kirkwoodians about their dislike of the steroidal Lego mansions “going up across the street,” but until this summer, they were private grumbles. So why now do they want to Protect Historic Kirkwood from this: 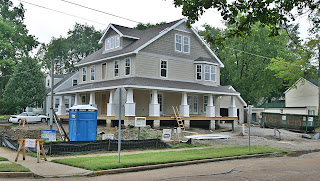 Here’s my theory:
They understand that free-market private property rights rule, but the new housing market is like the drunkard staggering down the street waiting for the proper gutter to fall in to. There are now, literally, dozens of these new Vaguely Victorian monsters sitting empty with For Sale signs flapping in the Kirkwood breeze. Rather than minting it, these developers are now losing money, thus don’t have the financial clout to massage city hall as they have in the past. Also, with a return to a Buyer’s Market, more people now have to stay put rather than freely move away from what disturbs them.

I believe the neighbors now sense the chance to have just as much pull as the developers, and their form of kicking a man when he’s down is: we’re going to alter zoning laws AND we hate your trousers; you have horrible taste.

When money talks, it’s the loudest voice in the room, but lately it’s a bit phlegmy and hoarse. That leaves just enough quiet for Horton to hear the Whos down in Who-ville, and proclaim (in modified format): A House Is A House No Matter How Small.

With every passing day and every new yard sign, Kirkwoodians are getting braver about this situation, and they are a town with the pride and organization to actually make a difference for themselves and for other townships getting fed up with abused zoning laws and garish, bloated houses. Their public conversation continues, and I wish them all the best in finding smart solutions that balance the scales.