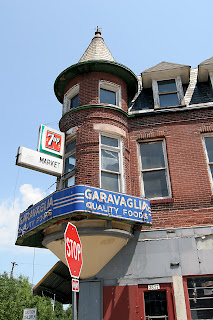 Intersection of Lafayette & Nebraska Avenues
South St. Louis City, MO
The building above, with its distinctive corner turret and vintage signage, is always a welcome sight. I mentally refer to it as the Garavaglia Quality Foods Building. Considering all the activity going on in the immediate area, maybe it’s just a matter of moments until this building comes back to life? 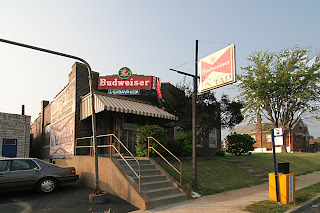 Near the intersection of Loughborough Avenue & Morganford Road
South St. Louis City, MO
I pass this tavern on most every work day. It’s such an essential part of the fabric of this part of town that it’s easy to overlook it. And only a few weeks ago did I finally SEE its signage: Garavaglia’s Hill Top Inn. As in the same Garavaglia’s Quality Foods Market? That’s not a real common last name, and how did I overlook this possible connection for so long?

The Quality Foods building was built in 1895. City directories list Pundt Brothers Grocery in the space from 1912 to 1946. From 1947 till the very early 1950s, it was the grocery store of Eugene Wessbecher. Around 1952, Charles J. Garavaglia came into the picture, with a name change to Quality Foods in 1963. Records show the corner market stayed in business until 1989, so is that when the building was shuttered?

The building is still owned by Garavaglia Quality Foods, LLC, and oddest of all, they are listed in numerous on-line St. Louis catering lists. Meaning, some unknowing South Side bride will find this place listed as a viable provider of mostacholi, call the number and get the “no longer in service” message. How does a place that closed in 1989 still have such deep internet saturation? 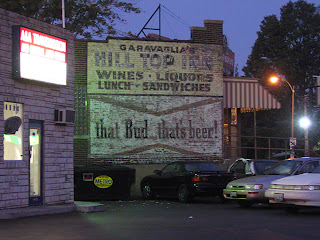 As for the Hill Top Inn, the building first appeared in 1924, and by 1933 it was billed as Gockel Groceries. The service station seen to the left in the above photo was also there, belonging to George Schwartz, who just so happened to live next door to Goeckel Grocery, at 6904 Morganford (it is now the vacant spot between the tavern and the other house seen in the 2nd photo, above).

In 1942, Joseph J. Garavaglia owned the building, and turned it into a liquor store. In 1947, Julia Garavaglia took it over, and by 1968 she changed the name to what we still call it to this day. At this time she also moved into the now-absent house next door (presumably after Mr. Schwartz moved out, but ya never know).

While doing all this research, I ran across a Garavaglia Market that operated in Dogtown from 1930 – 1950, but then realized that all of these joints never had any owner names in common. Wondering just how common a surname it is, the White Pages reveals a full half-column of Garavaglias, so it’s not a rare name, obviously. It’s merely that a heaping handful of people with this name have been/are connected with food and liquor concerns in South St. Louis, and they have given us some delightful signage and good times. I salute all the Garavaglias!

16 thoughts on “Garavaglias’ of the South Side”