No more Lowe’sville.
The third week of November found Ms. Thompson finally selling her home to DESCO. They were the last house standing in the way of, ahem, progress. She really had no choice, but she gets a red badge of courage for having lived in such desolation while fighting a losing battle against eminent domain.
And in short order, the house was stripped. 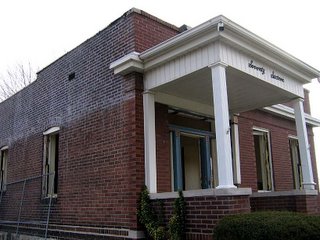 On December 5th, guys worked until well after dark loading fixtures into a U-Haul. On December 6th, workers began dismantling the garage. Surely, the house will be dust in the wind before Friday rolls around. And crushing the Lone Holdout won’t be near as noisy and harmful as the new buildings going up. 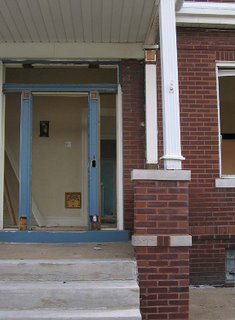 I hope the Thompsons got enough money to buy a worthy new home. And even as the last remnants of this battle are disappearing, the fight wants to go a few more rounds.
From the December 7th “Town Talk” in the Suburban Journals:

“Boycott Loughborough Commons
PEOPLE OF SOUTH St. Louis and South County do you feel powerless about eminent domain? Now is our chance to show people that we don’t want houses torn down for shopping centers when we have enough places to shop. I urge people to draw up petitions in your neighborhood for people to sign that they will not shop at the Loughborough Commons Shopping Center at Loughborough and I-55. Send those to the DESCO Group Developers. Let’s finally do something. Let us show that we still can control this type of situation. We deserve to be able to keep our homes and feel safe about situations like this. This is not what eminent domain was for.”

4 thoughts on “Last House To Lowe’sville”