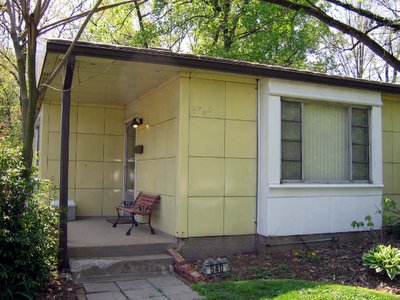 Friday, October 21, 2005
It was quite the treat to see a full-color Lustron, and its proud owner, on the cover of the Webster-Kirkwood Times newspaper. The more exposure they get, the more people may come to love them, and with a couple of them for sale in Webster Groves, this is great publicity.

Sunday, October 23, 2005
I get this e-mail from the very same Lady Lustron owner currently on the front page of said newspaper:

Toby,
Oh my gosh, I just randomly fell upon your blog post regarding the Lustrons. I was quite surprised when the first image to load was a shot of my own home! I was further surprised when the next images were of the 540 Ridge interior. My past week of activity has been fully immersed inside that home.

I so hate to be the messenger of bad news, and most especially in this case, as you yourself talked so highly of the home and your desires to acquire it, but the home was demolished this Tuesday, October 18, 2005.

The good news in the case of the Ridge home is that while on the site attempting to salvage parts from the home, a woman from the local Historic Preservation Commission just happened to walk by the home and started a conversation that led to an invitation to the next Webster Groves meeting. They have already proposed that an ordinance be put in place so that all the Lustrons in Webster Groves are designated as historic. This would impose a 120 day wait period for all imminent demolitions of a Lustron (or any historic) site. The saga with the 540 Ridge home will be part of the presentation I plan to deliver to the commission on November 16, 2005, and photos like yours that illustrate the very good condition of its interior would really add to the impact of the loss that was suffered by demolishing this home.
Thanks so much!
Angie Boesch

She asked if I had any more photos of the dearly departed (yes, I do), and can she use them for the Webster Groves city hall presentation (oh, hell yes, she can!). After several deep breaths to get my heart pumping again after hearing such horrid news, I asked for more details, which she provided:

I’m still in a bit of shock over the whole series of events, still looking back in hindsight thinking of all the things I wish I would have done different to change the outcome (like contacting the owner when the house was listed on ebay, or bid myself on the house and worry about the details after, or simply just not be so ambitious in returning to the site on Monday). But it is demolished.

It was bought for tear-down by a developer who is rebuilding on the site a 24 ft wide, 2 story row house. And the timing of the news article printing just after all this occurring feels quite poignant. Here’s a summary of events as I posted them for the online Lustron community a few days ago. I also put together a slideshow of demolition photos from the site.

“As many of you may recall, the Lustron located at 540 Ridge Ave in Webster Groves, MO was listed by a realtor earlier this year. Several good prospects were interested in purchasing the home as their main residence. The property was in the end, however, purchased by a developer who sought out this Lustron community seeking a buyer to purchase the structure to be removed from the lot. With no offers, the home was then placed for auction on eBay with an approx 2 month window for its removal. The winning bidder began the process of disassembling the interior of the home and midway backed out of completing the removal due to the time constraints and challenges arranging for its transport.

During the last weeks on its lot, the land developer/owner was very accommodating and open to inquiries on offers to purchase for salvage items from the structure. Neighboring Lustron homeowners made him offers on the items which could be removed themselves from the structure that they were in need of for restoring their own homes, as well as the most commonly needed items requested by the general Lustron homeowner community.

The Lustron at 324 Hazel, with an expanded attached garage will be replacing its asphalt shingle garage roof with original Lustron roof tiles to complement the authenticity of the home and coordinate with the main house.
The Lustron at 330 Hazel, which was for some years a rental property, and now owner- occupied, was hoping to salvage the kitchen passthru unit. After many hours of laboring to disconnect the unit from the structure, the challenging task prevented its salvage.
Many of the original fixtures were salvaged and will find good homes with several Brentwood Lustron owners: the kitchen ceiling fixture, the utility room wall fixture, the hall sconce, the bathroom medicine cabinet, the bathroom vanity cabinet and drawers, the bathroom robe hook, the pocket door track, several inside corner wall trim pieces, the original aluminum front storm door (manufactured by Eagle Picher).

For my own Lustron, I managed to salvage both back elevation bedroom windows, all window screens and clips, the bulk of the home’s window cranks and latches, 4 square interior panels and a handful of random shelf inserts. The bad news is that we in fact had also collected and hauled all of the interior closet doors (tall and short), all of the vanity drawers, all the shelf inserts, all three interior pocket doors and nearly a full elevation of exterior panels.

On Monday, the day prior to the demolition, after two full days working til dark all feelings of a successful partial home salvage were to end. At roughly 8:30 I arrived back to the site and began working the exterior panels off the house. I had accessed the corner panel and began exterior removal roughly 4:30 Sunday, working until about 7.
At 9:30 am Monday about three quarters of the first wall were down. Then a demolition company employee arrived onsite and confronted me, suggested I stop any further work until the owner of the demo company arrived. I explained the situation and the arrangements that were made with the redeveloper/ owner, and he explained to me his perspective that this was a breech of their contract and the structure became his upon entering that contract. He firmly insisted that all the panels be returned to the site.

Stuck in the middle and wishing not to infringe on anyone else’s property rights, I agreed to do so. After a few moment’s contemplation (and angry words of disgust with the situation), he insisted on escorting me and loading all the salvaged steel items that were taken from the location into his truck. I managed to convince him to allow me one request and salvage all the closet door rollers from each door prior to dumping them. The full load of potential replacement parts that we worked to preserve were loaded into a dumpster, all bound for the steel scrap yard.

The demolition company’s view is that they own the structure and with the Lustron, they gain a profit margin from the recycled steel scrap which in turn is part of how they estimated the bid for the job to the developer. Unfortunately we assumed the developer/owner had full property rights to the salvage parts we were seeking and that was the main crux that made even a partial home salvage fail in this instance.“

You and anyone else are welcome to attend that meeting, it is open to the public. It will be held the third Wednesday of November (16th) at 7:00 pm on the 2nd floor of city hall, first room on the left. And I’m going to assume further meetings will continue on the topic until they approve or deny the proposal.

FYI: the next local site I’m keeping my eyes open to is the Lustron at 224 Simmons. It also just sold on ebay for removal by December 31. (this is the third Webster Groves Lustron sold on ebay this year). The ebay item #4410237956 in case you want to look up the auction archive. Thanks again so much for your help and your reassurance that there ARE other locals out there just as concerned about the Lustrons as those of us living in them.
Thanks,
Angie

As I griped the other day, I’m pretty much architecturally disgusted with the St. Louis area at this moment. Adding fuel to my toddler-like hissy fit is Angie’s news that the developer tore down the Lustron to build “a 24 ft wide, 2 story row house.” What?! Could that be any more inappropriate for that neighborhood? It goes from the tragic to the absurd.
While I’m, basically, throwing toys and holding my breath until I get my way, I’m thankful there are mature, dedicated and organized Lustron owners ready to fight for what’s right. Once I regain my composure, I plan to help in any way I can.