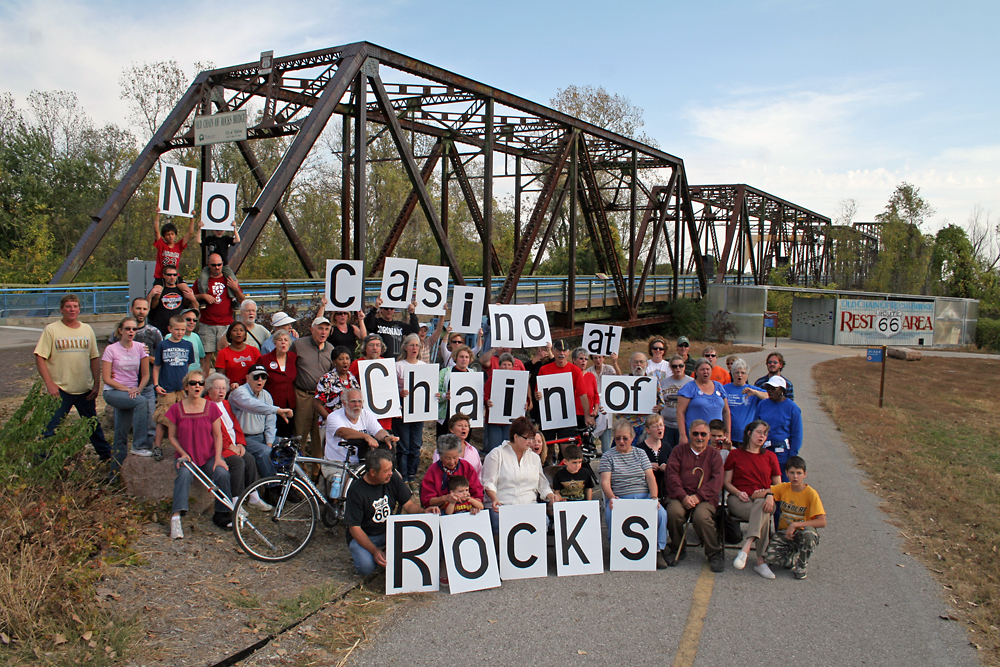 There remains one untouched portion of North St. Louis where you can see and feel the river.  Bike or walk the Riverfront Trail and the Chain of Rocks Bridge, and see years worth of diligent work by Trailnet and Confluence Greenway to give everyone a tranquil taste of the beauty and power of  the Mississippi River.

St. Louis City Hall and Koman Properties see this same area as empty land ripe for a casino – a way to keep within city bounds the 13th gambling license that was put in jeopardy when the President Casino folded. They have devised a plan for inserting a new casino here that does not take into consideration the people who live here, the people who use this area, and the ecology that makes the area unique. Their plan is not well thought out, and they’re trying to keep it closed to public input.

This is why the residents of the Chain of Rocks neighborhood and other concerned citizens gathered on October 23rd to stage a photo that will be sent to the state Gaming Commission. And I was honored to be asked to take the group picture (that’s me on the ladder!). Here’s KSDK coverage of the event.

Barb Floreth,  one of the planners of this event (and a resident of the City’s 2nd Ward in the bluffs above Riverview), wrote this piece explaining their side for Urban StL.

Together with other neighborhood associations who would be directly impacted by the proposed casino, Barb and her husband Chris Ballew have worked hard to ensure that this project is not a backroom handshake deal. The State Gaming commission has welcomed response from concerned citizens, and will keep that in mind when they make a November decision on which – if any – location gets the license.

So far, the group has handed out 1,000 pre-printed postcards for us to fill out and send to the Gaming Commission to express your concern. Print out this postcard to help show your support of No Casino at Chain of Rocks. 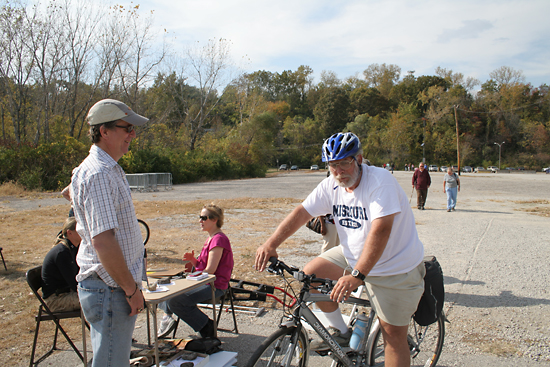 If you are familiar with this part of town and this spot at the foot of the Chain of Rocks Bridge, in particular, then you know the 2-lane road that is Riverview Drive. When looking at the drawings and plans for the proposed casino, the residents learned that the developers are only concerned with traffic coming in from Interstate 270. They have not given any thought to who will use Riverview and its existing traffic problems. If the developers have overlooked this crucial factor – how consumers would get to the casino – what else have they overlooked?

The projected financials are another interesting aspect. Mayor Slay acknowledges that the new casino could bring in $50 million in business from Alton. Basically, that’s poaching business from another casino, right? Which is rather un-neighborly, and highlights the cut-throat aspect of casino competition. No one seems to concentrate on creating NEW clients, just re-routing the same base. And let’s consider human nature: gamblers will flock to the newest casino, but will eventually return to the one closest to their house. The proposed Chain of Rocks Casino will most likely wind up dead in the water because of its remote location. 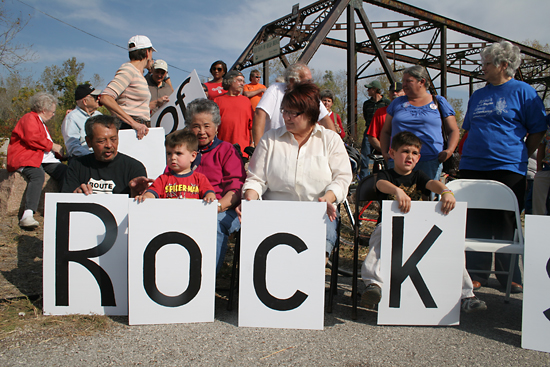 But Slay is willing to bet on this project because of the projectd $2 – 11 million it could bring to the City coffers.  But what is the long-term cost of this project? Is it worth decimating everything Trailnet, Greenways and the 2nd Ward have achieved? Is it worth alienating the people who live in this part of town (who happen to be City voters) by literally putting a casino in their backyard?

The Gaming Commission granted a half hour public meeting about this project, which was more than City Hall or Koman wanted. But the Commission is open to further comment. If you think this proposed casino is a bad idea, please speak up by writing to the Missouri Gaming Commission to let them know you do not want a riverfront casino built in St Louis City at the Old Chain of Rocks Bridge.

Learn more at the blog No Casino at Chain of Rocks.

7 thoughts on “No Casino at Chain of Rocks”