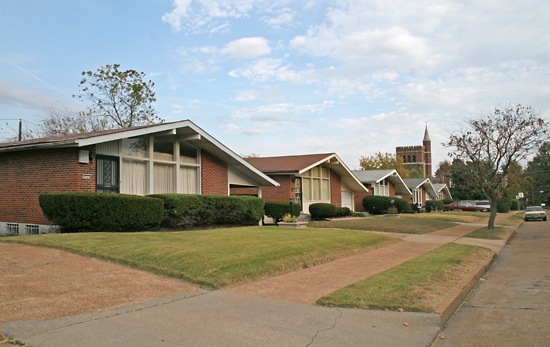 Shreve & Lexington Avenues
North St. Louis City, MO
The St. Louis City Talk blog pegged these houses above when covering the Kingshighway East neighborhood (scroll down 40%), and when I said to Matt Mourning that I wish I knew exactly where they are, he said, “I told you about them in January. They’re at Shreve and Lexington.”  Within a couple days, Chris Naffziger and I were taking in this scene. St. Louis bloggers do not mess around (except when they forget something told to them 10 months ago – what a drag it is getting old!) 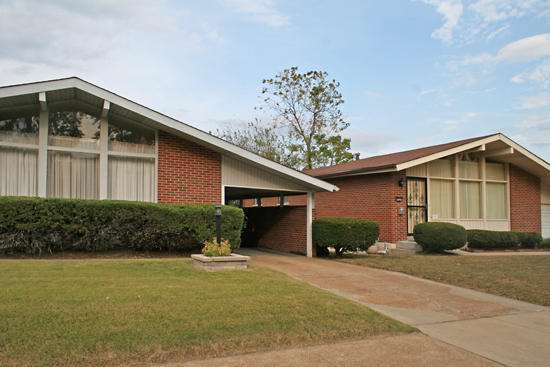 There’s actually 2 perfect rows of these houses, back to back on Lexington and Palm, creating an entire block of mid-century bungalows between Marcus and Shreve. All of them are 1,104 square feet, built between 1962-63, according to City records. The Lexington side also extends one block to the west, where the homes face Handy Park, with half of them of the same vintage, but with a few design variations and a little more space, clocking in at 1,173 s.f.  These new homes were labeled the North Cote Brilliante Subdivision. 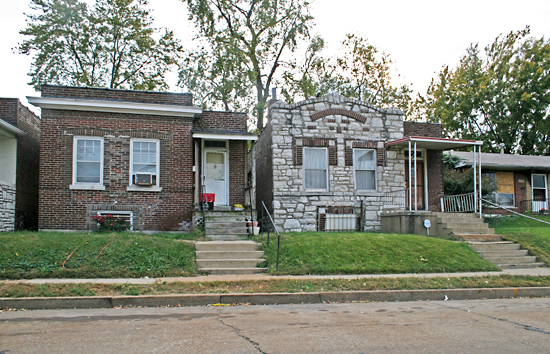 What makes the compact block of North Cote Brilliante so intriguing is what is across the street from them. Shown above is a good sample of what the residents of the 4700 block of Lexington see when looking out the floor-to-ceiling windows of their mid-century pads. These brick boxes date from 1911-1912, and none of them go over 725 s.f. This is standard for this era of single family homes in this area. It’s the mid-century homes that are out of place, in the best way possible. 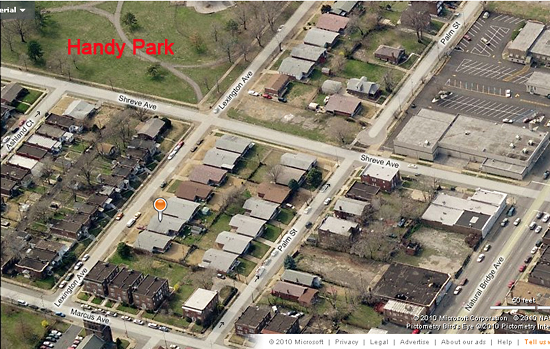 Take a look at the aerial map and you see how different they look from their neighbors, with no alley dividing the backyards, and their bright, low-pitched roofs contrasting with the flat roofs all around them. Considering the history and density of the area, it’s natural to assume that similar homes were demolished to build the new houses. But why did they choose to demolish that particular block – plus another near-dozen across from the park – to insert new homes?

So began the research through old City Directories, which showed nothing at all at these addresses even as far back as 1921. In fact, in 1921, Shreve didn’t even exist as a street south of Natural Bridge, and Palm ended 10 blocks east at Clay Avenue. 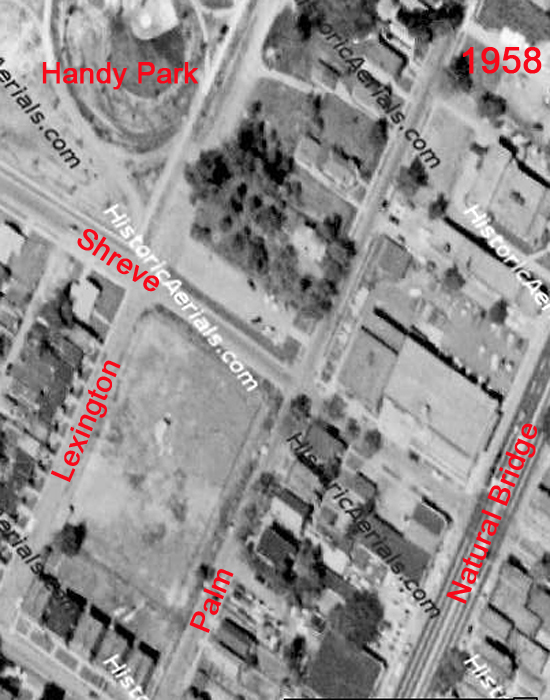 A 1958 aerial map confirms that the sites in question were indeed blank, with Handy Park taking shape at this time. Turns out Handy Park was dedicated in June 1960 in honor of songwriter W.C. Handy, who matters greatly to blues music, in general, and matters specifically to our city because of his seminal 1914 classic “St. Louis Blues.” 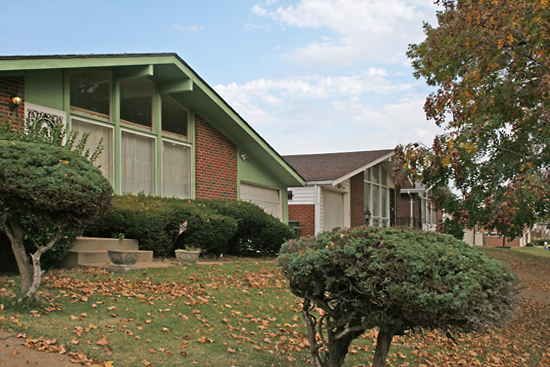 The City made the ordinance to turn this land into a park in 1941, and even at the dedication 19 years later, the houses overlooking the park (shown above & below) were still 3 years away from being built and bought. So why were there sizable swaths of blank land in the middle of this neighborhood for so many decades? 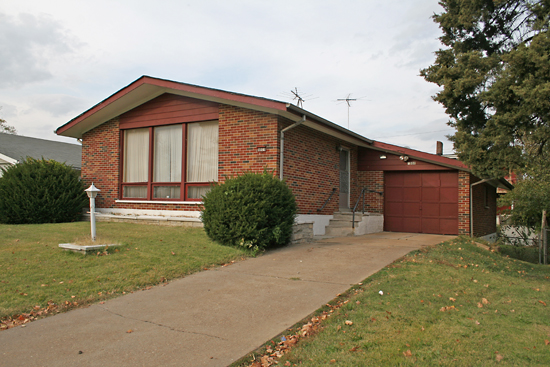 Tired of pouring through books at the library, I took a delayed shortcut and called my father, Richard, to ask what was up with that part of Kingshighway East. His immediate answer:  Handy Park was once a quarry. He remembered being 8 or 9 (which would be 1940 or ’41) and going with his parents to visit their friends who lived at Lexington and Aubert Avenue, and being specifically told not to go near the quarry which had recently been closed because some boys had been killed while exploring the site. For roughly 15 years, they filled the site with cement and stone to get it to a point where they could build the park. 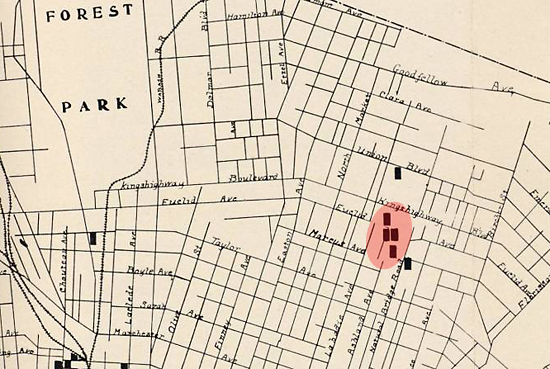 His recollection of time period jived perfectly with the City park ordinance, and a quick cyber search verified that indeed there was an awful lot of quarry right there, as shown in the pink dot on the 1904 quarry map, above.  According to Stone Quarries and Beyond, it was known as First Quarry, one of three owned by John B. O’Meara. The official address was at Euclid and Ashland Avenues, and limestone was pulled from it starting in 1876. 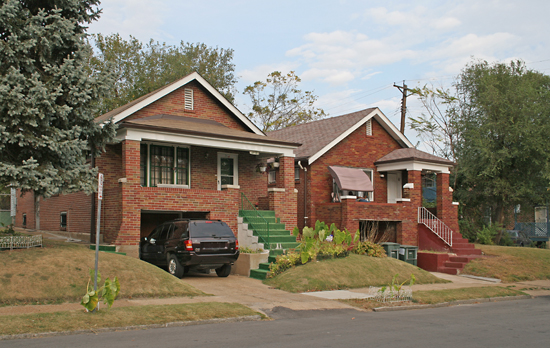 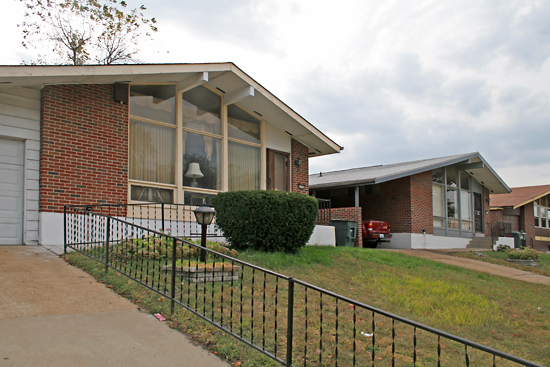 It’s heartening to know that nothing was demolished to make these small, swanky homes, and it’s intriguing that many homes of this type were going in the North Side. For example, Norwood Square – just 1 mile west of here – went up on the site of a former trash dump. And similar homes (which can be seen here at St. Louis Patina) went up on always-vacant land on both Carter and Anderson Avenues – about 2 miles northeast of here – between 1952 to 1961. There’s also San Francisco Court that went up in 1957, and which will be covered in a future B.E.L.T. post. 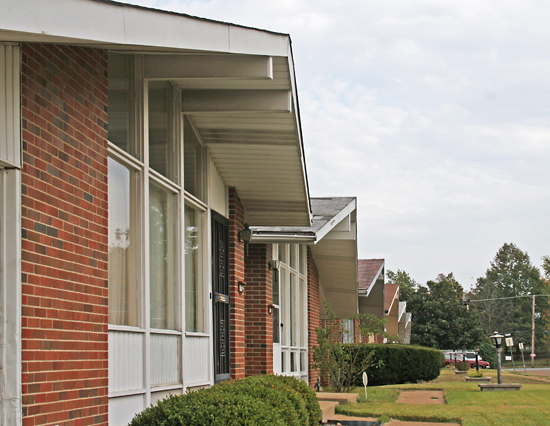 There was a sizable chunk of new post-war housing being built in North St. Louis, yet all the various versions of St. Louis City history never mention this, even in passing. These new developments were a big deal to the people living in the area. In fact, on this block that you see above, there still resides two original residents who moved in to them when they were brand new in 1962.  And note that most of them are in really good condition, which is evidence of decades worth of constant maintenance.

These houses were a big deal then, and they still matter today. Yet they don’t rate a mention in the developing history of North St. Louis. The story is told as if nothing new and inspiring went on in North St. Louis after World War 2. With a sidelong glance to the Urban Renewers, Red Liners and Paul McKee’s of St. Louis, I ask:
Why is that?