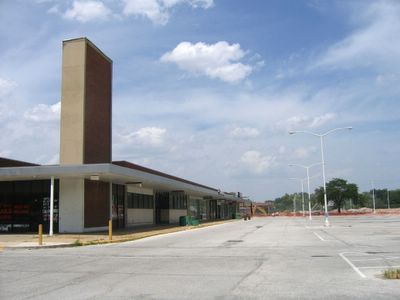 Today’s visit to the Northland demolition site was about absence. Review this to see what was once anchoring the middle right portion of the above picture. There are now two loose ends with an enormous gaping hole between them. 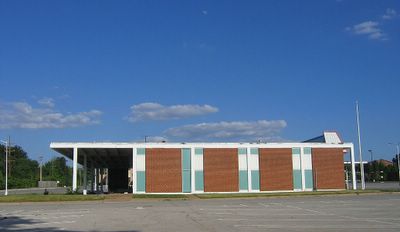 On my last visit to the site, this building (above) was still standing. It was originally the post office. Note the cut-out on the left end of the building that was the loading dock, and how the enitre packge is very Neutra in line and execution. 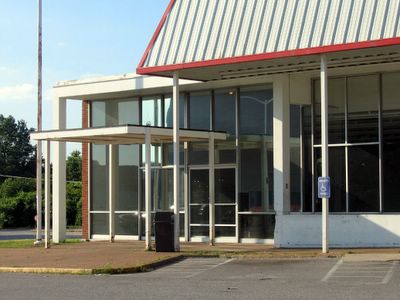 Ignore the absurd cap that was put on its front (above) when it became a Family Dollar, and note the placement of simple geometry to indicate entry, lobby and main body. The area where the handicap parking sign stands now was once a decorative concrete block sunscreen. That was a very popular form of solar protection in the late ’50s/early ’60s, (and is still seen widely in Southern California), and protected the lobby from the harsh sun, at least until central air was installed. 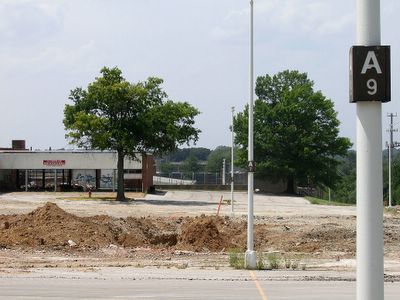 Today, all that’s left of the building is….nothing. Just this shallow hole of dirt in the blacktop. 22 days ago, there was a building, and now there’s nary a tiny remnant. How in the hell did they demolish and clean up so fast? They’re still picking away at the carcass of the Famous-Barr building, while this one just vanished into thin air! 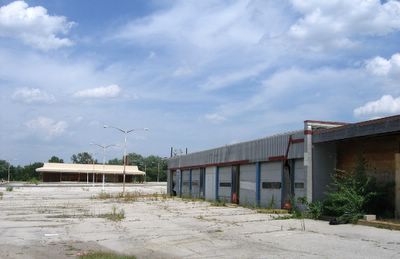 (Above) The last two original outlot buildings (Rapps/Schnucks to the left, Famous-Barr Automotive to the right) can obviously be dispensed of just as quickly as the post office. Considering how quickly they’re now moving, I need to visit the site once a week. But it’s getting harder to get onto the site, as they’ve blocked off all but 2 of the many entries. No matter how or when, something tells me this is the final photo of these buildings.

One thought on “Northland Demolition Part 3”