Let’s carry the story into 2006, by sharing what I saved from Northland Shopping Center.
Reminder: Should you want it, the entire story is here, and enlarge any photo by clicking on it.

Northland’s main sign (above, left) stood diagonal to the West Florissant and Lucas & Hunt intersection. For decades, it was the community’s bulletin board.
When its demolition date arrived, they obviously didn’t bother to dismantle it; they just crushed and whisked (most of) it away. Broken pieces of the big plastic letters were partially buried in the dirt. The “R” (above, right) was the only letter that remained recognizable. In my backyard, it certainly does look like a haggard “P,” yes. 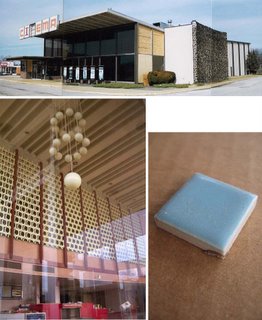 The Northland Cinema (above, top) was built in 1967. I took the last pictures in Spring 2002, including the pool-side-fabulous lobby (above, bottom left). Darren Snow and I visited on July 2002, and the cinema had been thoroughly demolished, the last of its remains in a few large trash dumpsters nearby. To which D. pulled his pickup alongside so I could climb atop the roof and get into the trash dumpsters, desperate to get a recognizable souvenir. My only “save” was a single, baby blue ceramic tile (above, bottom right) that was once part of the ladies’ restroom sink backsplash. It’s only 1″ square, inconsequential at best, but simply holding it makes me feel way better than any new age crystals they sell.

On that same day, we waded through the forest of fallen light poles (above, left) that once surrounded the Cinema. The metal parking-place reminders that hung around each pole turned out to be rather huge. Darren was the toolbox-wielding hero (above, middle) who patiently cracked decades of rust and snagged us some parking reminders. “A13” is somewhat heavy and bulky (above, right), but that’s what makes it the perfect sunroom muddy-shoe-holder. 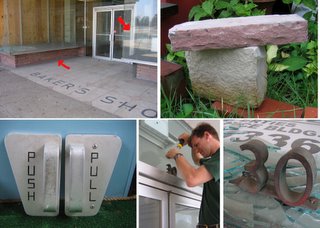 The former Baker’s Shoes storefront (above, top left) yielded a few treasures. The original door pulls (above, bottom left) were long-coveted, and once vandals broke a display window, I was able to get in and take the handles, which had been sitting on the vacant countertop (top red arrow in top left picture) for over 2 years. They are gorgeous.

During a summer 2005 visit, Rob Powers was dead-set on having the Baker’s store address (above, bottom middle). Rightly so, because it’s in that smart Lever House font. I dragged a 6 ft. ladder down from the (now easily accessible) Former Kresge. Darren’s magic toolbox had the right size screwdriver. Rob spent a good 15-minutes of cursing under his breath, and finally dislodged (above, bottom right) the Dirty 30. Since he was so diligent, he deserved to keep it.

I also had to take a brick from Baker’s (above, top right). Special Nerd Note about this photo: the Baker’s brick is sitting atop a limestone brick from the old Cross Keys Shopping Center. It was part of the former Kroger grocery store facade. 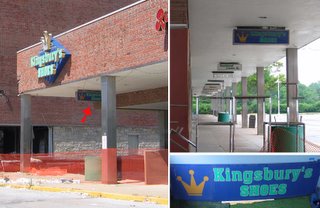 Baker’s Shoes eventually became Kingsbury Shoes (above, left) and the hanging promenade sign (above, top right) eventually became mine (above, bottom right) after the wrecking ball smashed this section into dust. 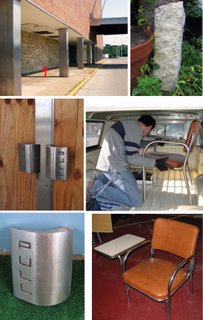 From the Former Famous-Barr (above, top left), I dragged off a stone brick (above, top right). A few days later, Brett Reagan (above, middle right) brought along his pickup truck to help me gather more FB stuff, like a chair (above, bottom right) that came from the FB Human Resources office. I figured out its provenance from there being so many of these desk chairs sitting nearby the Employment Office entrance. Plus, after 13.5 years as a Famous-Barr advertising employee, I was overly familiar with the furniture in the areas where folks filled out employment applications.

The FB door pulls (above, middle left) were something I always longed for, and I now had clear access to removing them, but we had no frickin’ tools! While we stood talking inside the building, we kicked at piles of debris and up popped a solo door pull! The sucker (above, bottom left) easily weighs 10 pounds, and is dashing in its modern simplicity.

More FB fixture finds include a fire alarm (above, left) and a tin placard that Michael Allen pulled from an AC unit (above, right) and was so kind as to let me keep. 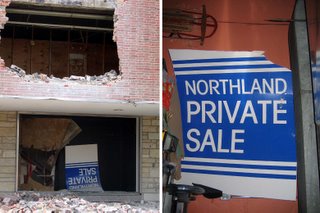 I waited a couple of weeks for the sign revealed in the FB window (above, left) to become available. So, it’s large but it’s old foam core, so it shouldn’t have been a problem, right? Oh man, it was brittle, large and awkward (above, right) and was the hardest thing to load into Brett’s truck.

The begrudgingly optimistic sign (above, left) that sat inside the former candy store’s vacant display window was eventually scooped up by me as it fluttered by in a post-demolition wind.

The sign died in the above, left windows, and later I got a patch of the ceramic tile (above, right) that covered the display facade. 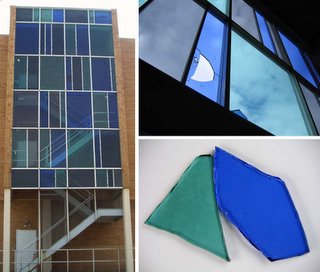 The exterior stairwells of the Northland Office Building (above, left) were wings of metal, concrete and Mondrian stained glass (above, top right). During demolition, the glass fell to become candy sprinkles on the sidewalk. I oh-so-carefully carried off some really sharp shards (above, bottom right), and they never fail to remind me of so many moments of sunlit abstract beauty in the stairwells. 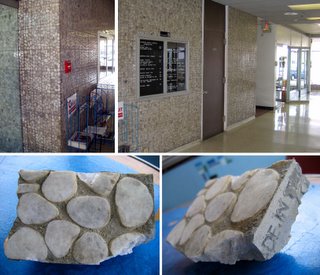 The ground floor lobby of the Office Building (above, top left & right) was straightforward linear, with its only organic texture being the tile walls. One had to stand right against it to notice how jet-age loopy the rock pattern was. I later learned a deep appreciation for those rock walls only after I got a chunk of it (above, bottom left). Those are halved pebbles of polished granite embedded in a sand base. My little piece has heft and presence, and the “Made In Italy” stamped on the side (above, bottom right) reveals a high price tag, even back in the mid-50s. Which just highlights how Northland developers and architects never skimped on materials. The construction and the finishes were for important permanent buildings, so they figured the cost was worth it. So, cost pro-rated by 50 years, they probably got their money’s worth… 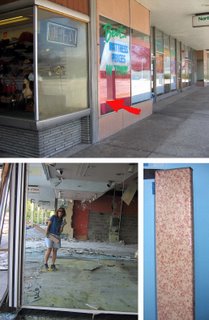 The former Kresges at Northland was my Xanadu, and while I got a few things, I never got the chance to thoroughly dig through the guts in search of authentic Kresge souvenirs. The wrecking ball and rain got to it before I got a final crack at. But I did get to tear off a piece (above, bottom right) of Kresge’s upper level facade (above, top). Those sheets of coral and red enameled metal were screwed on for eternity, and I even lost my best screwdriver in the fray, but I won the fight (above, bottom left) and took away a valid, solid chunk of S.S. Kresge & Co. 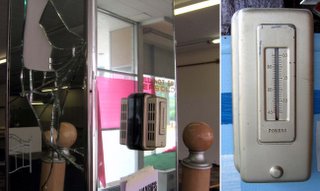 On another day, I was happy to just get an original thermostat cover (above, left & right). 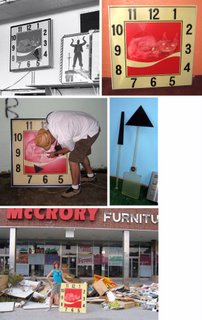 But for me, the most-coveted item in the place was the original Coke-Cola clock (above, top left). Forever it hung on the back wall of the upper floor; when Conine said to meet her by the cash registers in 15 minutes, that clock kept me from losing solo toy browsing privileges. At some point, a cat lover permanently altered the clock face, but I still wanted it bad.

Many times I tried to work up the nerve to walk inside as McCrory Furniture staff cleared out the store, and simply ask if I could have the clock. But if they knew it was important to me, they’d want to sell it for some absurd amount, I’d refuse and they’d keep the clock to spite me. That’s how revved up I was about snagging the clock – imaging fights with furniture storeowners.

I kept a vigilant eye, and finally Powers, Snow and I had unrestricted access and a ladder. Despite repeated attempts, we couldn’t budge the giant, heavy clock from the wall, and my heart was breaking. I was so close, the clock is right here in my hands and I can’t have it! Just cruel.

About a week later, Vince Mattina and I found the clock had been carefully removed from the wall, and sitting on the floor not too far from where it hung (above, middle left). It’s way too big to fit into my car, but what about just taking the clock face? The hands (above, middle right) had to be removed in order to free the face plate, and I failed miserably at it, almost snapping off the hands in anger. Vince was far less emotional about it, and methodically removed the hands (“Now, you have to save these, too. It’s the best part.”) without aid of tools. My hero, Vinceman, freed the clock hands and face, helped me cart out the bounty, and even took my picture (above, bottom) with the hard-won prize. It was a triumphant moment of relief and happiness, certainly the biggest mount in my trophy room (above, top right).

The stairwells at Northland (above, right) were always a visual and physical delight. On one visit, one of the canister lights (above, left) had fallen down onto the stairs. The scale of Northland was so large that all ornament on it seemed normal-sized when seen from the sidewalk. But when finally right up on a piece, it was overwhelmingly large. This canister light was monstrous. So huge that I had to pass on carting it off, and I regret not having made the effort. It would have made a unique and durable trash can. 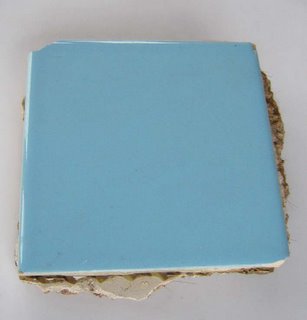 And here’s the last piece of Northland I own (above). I have no idea exactly which store it came from; it peeked out from a pile of debris on the northern lower level, so I scooped it up. This one square foot ceramic glazed tile summarizes the Northland in my mind. That particular shade of blue is so mid-century modern, so cocktail lounge cool, so New Frontier. It’s the big brother to the little sister Northland Cinema tile. If all my Northland artifacts were in book form, this tile would be the cover.
A warm “thank you” to all the people who helped me cart off “chapters” of the Northland story.