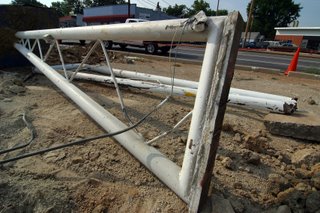 Here’s the backstory on one of my favorite buildings in St. Louis County.

This morning, I got word from Brett that dirt was being aggressively moved about the former Phillips 66 site at Manchester Road & Rock Hill. 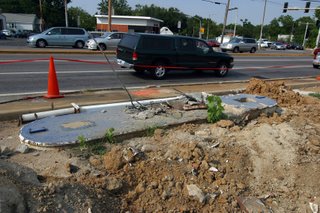 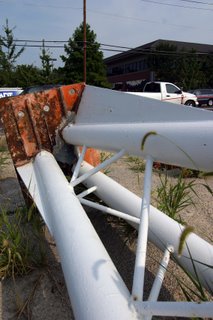 The double-wing Phillips 66 sat abandoned and waiting for an inappropriately long time. And then it came down in less than 5 hours. I suppose a swift demise is preferable to a slow, painful one. But it’s still shocking. 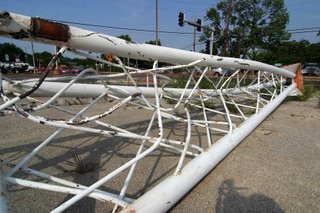 I cut out of work a little early to view the remains, and pay last respects. Even though I knew what to expect, it still hurt. 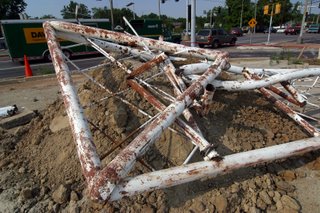 The demolition crew had swept the shattered pieces of the building into 2 piles that seem much smaller than they should be. At this moment, they had left behind all of the towers. Considering how quickly the crew is demolishing the entire southwest corner of this intersection, these pieces will be gone by the end of day Friday. 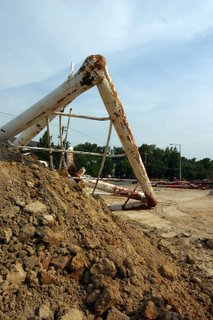 Above, it looks like a leg bone sticking out of an open grave. OK, a little dramatic, but these kinds of things can happen at a wake. 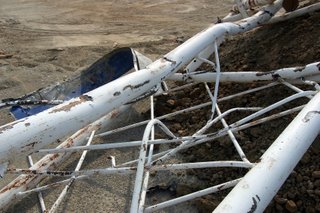 The last business in this building was Windshields & More, and they kept the place in perfect condition. After they were made to leave, it was shocking to realize just how strict they were with maintenance. Within 3-4 months, all the white paint started peeling, with rust seeping through. The royal blue trim grew dingy. But all the exhaust fume erosion couldn’t mar the lines of a building that always looked like a bird starting its ascent. 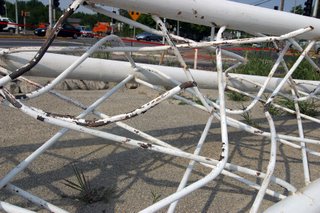 And now, the bird’s wings are mangled in the concrete dust.

My digital card filled up fast, and I stood in the heat with vehicles roaring all around, deciding if I should walk back to the car to get another card and continue on. Then I got lost in lengthy contemplation and sadness, finally broken by an SUV honking in my ear. Coming back to reality, I realized I didn’t have the stomach to finish this task. After documenting the crime scene, I’d paid proper respect to a lovely building, and once the rush hour traffic clears, and the sun sets, the Double Bat Wing can finally rest in peace. 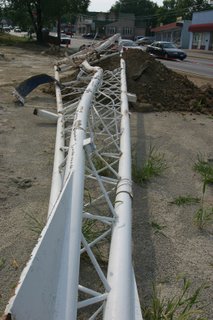