Manchester & McKnight, Rock Hill, MO
On the southwest corner of this ugly and congested intersection is a trim-line geometric bird waiting for flight. 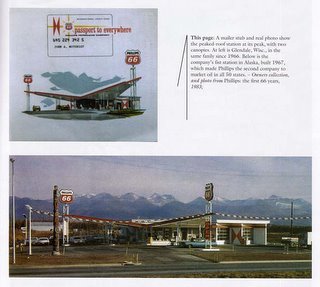 It was built in 1963 as a Phillips 66 gas station. It was a rare species of their New Look line: The Double Canopy. Only the suburban intersections with the greatest promise of heaviest traffic got Bat Wing Deuce. 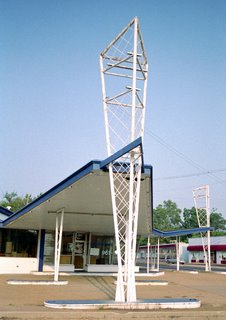 In the early 1960s, Rock Hill fit that description; today, times that by 150. This intersection is littered with unsightly power lines, traffic lights and signs, clunky after-thought storefronts and new-fangled retail devoid of personality. In the midst of the chaos is this light, delicate space age bird. 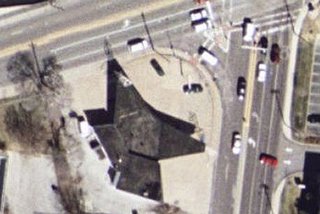 From an ariel view, you can see the bat wings, see how startling its appearance must have been back in the day, and how utterly alien it has become today. 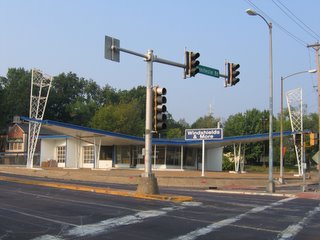 I’ve spent years trying to get the proper picture of the building, a way to convey its movement in stillness. I put a wide-angle lens on the film camera, and stood in the middle of the intersection on an early Sunday morning… less chance of being plowed down by angry SUVs. But I just can’t capture the essence. A light pole or warped blacktop always mars the airy lines. 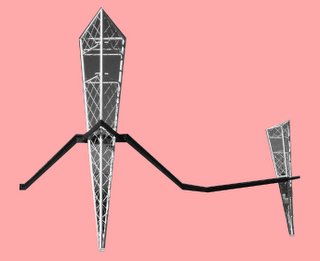 My mind’s eye always erases the ugliness around it, and all I see are those delicate lines. To my eyes, it’s a beautiful sight. To other drivers, it’s lots of honking because I missed the light turning green. 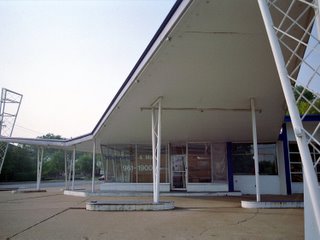 After Phillips 66 vacated, a chain called Windshields & More took over, and it was impeccably maintained. That indicates the owners appreciated their unique and functional building. Once while taking pictures of the place during business hours, one of the younger employees crossed the intersection to ask what I was doing. I told him I was taking some more in a series of photos of the place.
He gave me a queer look, and asked, “Why?”
“Because it’s a gorgeous building,” I said. “Look at it. There’s no other building like it.”
The kid stares back at it, squinting as he sees the building rather than just the place he works.
He finally says, “Huh. It is kinda weird, ain’t it,” and then lopes back across the street. 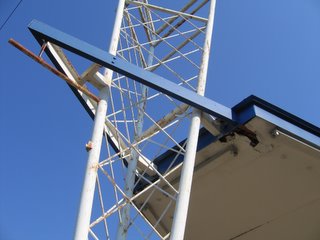 Because I love this building, that means it Must Come Down. My adoration equals destruction; it’s a strange Architectural Super Power I’m cursed with. I’d much rather have the ability to levitate or will a Triple Crown winner. But anyway…

Rock Hill is one of those land-locked municipalities. They’ve used up all the land, and have no new ways of generating income other than raising taxes or demolishing existing commercial and residential properties to build newer, bigger retail. Rock Hill decided both the northwest and southwest corners of this intersection should be in the hands of Novus Development. So, Windshields & More cleared out, and the Double Bat Wing has sat vacant for almost a year while Novus drops the ball. 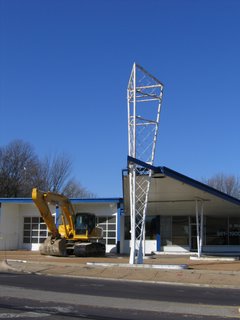 In the Spring 2005 issue of SCA, Cliff Leppke wrote: “Today, original Harlequin stations are a scarce resource on the commercial landscape.” The first week of February 2006, the heavy machinery moved in to bust up concrete. Soon, they’ll bust up the rare Double Wing Bird, my El Condor Pasa…
“Away, I’d rather sail away, like a swan that’s here and gone.”