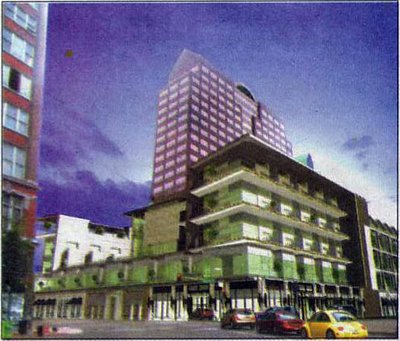 Architects for the reconfiguration of St. Louis Centre have been picked, along with a name change to 600 Washington. A rendering of the new facade is above (courtesy of the St. Louis Business Journal), and I like it. Anything would be an improvement to a building that was hideous and outdated on opening day in 1985. I appreciate the lower level retail being open to the street, and I like the thoroughly, unabashedly modern look of it.

It’s also a bugle call for what I think is sorely missing from the Downtown Renaissance: brand new, modern buildings.

It is criminal and inexcusable to tear down historically worthy buildings, and both the marketplace and public knowledge has progressed so far as to make that concept nearly past tense. I’m proud that St. Louis finally gets it, and embraces the financial and cultural benefits of restoring and reusing our urban past.

In the early 1990s, I was so fearful of how dead and dying downtown was that I began photographically documenting most all of the historic buildings between Memorial Drive and 14th Street. I’d rummage through the vacant ones that revealed a secret way in, and kept track of the ones under contention for destruction.

Then a rare miracle was granted by Jefferson City: They resumed the historic tax credits! I closely watched the press and the construction crews as, one by one, long-ignored buildings were coaxed back to life. And even though there was discernible progress, I still worried about some of my very favorites:

The Board of Education Building was near the path of the Century/parking garage debacle, but the Roberts Brothers have it under control.

The Mallinckrodt Building stood forlornly overlooked while the Lenox and the Statler were restored to prosperous activity. Were they going to also tear it down for even more parking? But Pyramid has it under control, and I’m both relieved and delighted.

Now that rehab activity is rapidly spreading to “Downtown West” (the modern term for everything west of 14th street), I no longer feel the need to worry about Downtown’s stock of historic buildings. Instead, the Big Picture view of the Downtown Renaissance shows a lack of brand new construction, which is a positive sign of a financial confidence.

Again, I’m not advocating the tearing down of any existing buildings. If you tour Downtown West, block by block, you’ll see plenty of vacant land memorializing what was already torn down during that last, fetid blast of Civic Progress in the 1980s. And those plots – usually half a block large – are crying out for vital re-use.

But to build something new that does a piss-poor job of aping its surviving neighbors would be an embarrassing and unworthy endeavor. It’s time to come up with thoughtfully modern and fresh, multi-story buildings – both residential and commercial – that will fit in with the scope and scale of its neighbors, but also herald a new plateau of downtown progress.

Earlier this year, I talked with a developer who has this same thought. The project – and its location – is being kept under wraps for many reasons, including that it will most likely be viewed as unacceptably radical to introduce a proudly modern high-rise residential building into the area. When was the last time Downtown St. Louis was receptive to that idea? Maybe the Mansion House in the 1960s?

Mid Town embraced new, modern architecture for that area (the Pulitzer and the Contemporary Art Museum), and the global architecture/design communities gave it more glowing press than did our hometown. I’m all for seeing a truly talented and site-sensitive global architect doing something similar on already vacant land in Downtown proper. I’d expect the planning and supervision of such projects to be just as strict and thoughtful as the Historic Tax Credit regulations. And I’d expect residential consumer response to be just as receptive to a new building as it is to the restored ones.

There’s room – and a need – to liven up the colors in the patchwork quilt of downtown. If the reconfiguration of St. Louis Centre works as well as expected, then we all might be more receptive to a new era of the old and new co-existing peacefully. I remain hopeful for the future of Downtown.