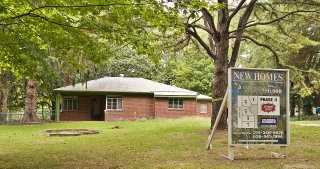 347 Ries Bend Road
Ballwin, MO
On the very same day that the St. Louis Post-Dispatch put the topic of Suburban Teardowns on the top half of the front page, I ran across this unassuming little house in Ballwin (above).

It’s a cute little house, well-maintained and added to over the years. A satisfying home life is evident all over the house and property, and makes me nostalgic for a history I know nothing about. There’s really nothing terribly compelling about it to advocate saving it; moot point, anyhow. It just happened to be a perfect example of why the Teardown topic finally even made it onto the front page of the P-D. 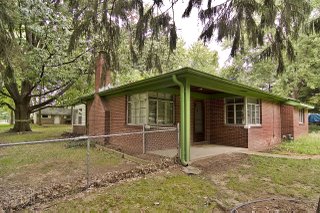 Public records from the county* inform that the house was built in 1952, 1,254 square feet on slab. It may well have been one of the original new houses built in this area, as the remaining original houses neighboring it lean towards mid-60s ranch style.

Lucille Fink sold the house and land in August 2005 to an unspecified buyer. The sign out front informs that Belcher Homes plans to build 5 new homes on this plot. They were supposed to start this past spring, but obviously they didn’t, and neither Belcher nor the real estate agent listed offer any further information about the proposed development. 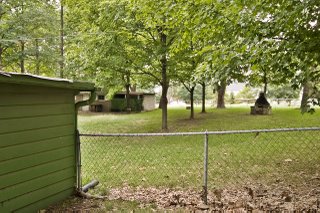 This plot is like high-potency catnip to home builders because it’s huge. A shot of the backyard (above) only captures a tiny piece of the vastness of the property. The buyer only has to contend with one homeowner/seller in a desirable location, and can then cram 5 new homes onto the parcel. From their perspective, it’s a sweet, sweet deal, and I’m shocked that they haven’t begun any serious work on it other than marking trees to be cut down. Would the home building bubble leaking be a reason for the delay?

Across the nation, Teardown conversation is building to a constant hum. Even in St. Louis County, landlocked, tax-dependent municipal governments have been spurred to address the topic during 2006. That is a valid indicator that it goes beyond the trauma of bleeding heart preservation advocates; the Average Joe Homeowner in these neighborhoods had to make an effort to introduce the topic to their City Hall, and City Hall had to respond.

Webster Groves is the latest municipality to address the topic, and they’re doing so in a conscientious manner. Of great interest is the logically brilliant idea presented by Jeanne Kirkton, who “suggested the possibility of sending a questionnaire to neighborhood residents. She said regulations should not stifle creativity but should maintain neighborhood integrity.”
Yesss!

Money talks, but so do the neighbors.
It’s an interesting struggle between City Halls’ needing the extra tax dollars that in-fill home builders’ can deliver vs. the area residents who vote for the folks in City Hall. Financial clout usually wins, but there’s been enough of a grassroots slapback to slow down the process.

Oddly enough, aesthetic considerations are only one part of the civic conversations; environmental impact, unrealistic property tax increases and destroying the stock of affordable housing are just as important to neighbors. Sure, the entire point is moot if individuals keep “selling out,” but these conversations conjure some form of conscious upon those now contemplating selling to the developers, and may conjure some form of moderation upon those wanting to cram inappropriately large house into the spot. By paying attention to Boomer Aging and the momentum of the energy crises, the safety net under obscenely large houses has a nasty tear in it. Responsibility to the environment may be forced upon as via pocketbook considerations. These are the right talks to be having at the right time; I feel less helpless about the situation, both locally and nationally. 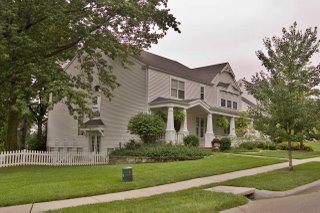 Anyway, back to Ries Bend…
Next door to the unassuming Fink House is a new street with houses built in the late 1990s (above). As go McMansions, these are much nicer than most models. They have a bit more character, as if aspiring to be worthy of a Norman Rockwell painting. Considering the soullessness of so many developments, “Norman Rockwell” really is a compliment. Maybe something similar will eventually fill in the open land of the Fink Lot. 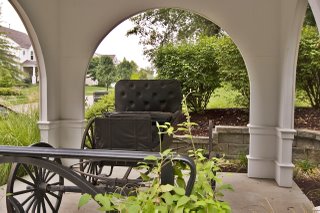 At the entrance to this street is a Disneyfied version of a carriage house, complete with an actual carriage. I’ve noticed this same motif at the entrance of several new neighborhoods in this general area. Is this the “logo” of a particular builder, or Ballwin City Halls’ requested nod to the heritage of the area?

About 200 yards from this tasteful theme park entrance, an old, rusted 1940s pickup truck rests just off the Fink’s carport (below). It speaks more accurately of this area’s 20th century history, but abandoned pickups don’t sell new housing developments as well as bucolic allusions of equestrian gentry. The added irony of the horse carriage is that the Fink’s could have housed about 5 horses in their backyard, but eventually it will hold 5 houses. 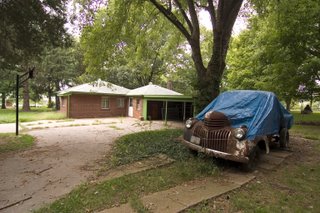 *Because of threatened legal action, I was forced to remove an entry about a Sunset Hills teardown property. Once the hint of danger to peoples’ livelihoods has passed, the rights and legalities of the subject will be researched so as to be better prepared should it happen again. And it probably will. Lots of people are making lots of money on properties marketed solely as teardowns, and anything that seems a stick jammed in their bike spokes is perceived as a threat. But it’s a free market with plenty of access to public information, and that works both ways. So, the topic (and the entry) is not dead, just resting and gathering strength.