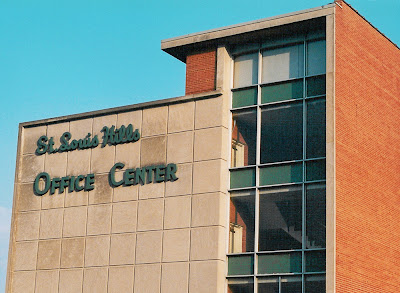 6500 Chippewa, South St. Louis MO
@ the Chippewa / Watson Road Merge
A very recent drive past one of my absolutely favorite buildings revealed something I was in denial about: the fate of the St. Louis Hills Office Center. It now displays every sign of an impending demolition. A city record check confirms the worst-case scenario.

On May 1, 2007, City Hall issued a second demolition permit for the building, with the first one granted in August 2006. The last identified owner of the building is Mardel Equity, LLC from March 2005. If a For Sale sign ever appeared on the building, I need someone to verify it, because I never saw one. It would be hard to miss a sign on that building because it is in a prime location.

So, did this building go from emptied to demolition without a chance of redemption? 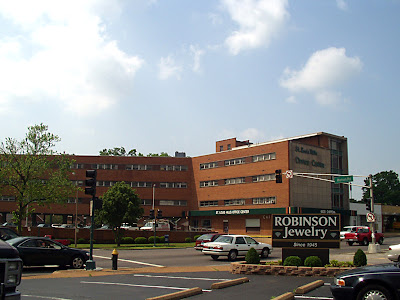 It’s been said that the 16th ward alderwoman, Donna Barringer, couldn’t find medical practices that would relocate there. I can follow her thought process, since it has primarily served as an office for physicians and dentists since it opened in 1958. And, yes, it is an absolute certainty that no modern medical office would even entertain the thought of using that building.

But why did the thought and effort stop there?
Deciding that this building can only be used as its original incarnation is decidedly antiquated, and fiscally short-sighted.

Stepping into an adaptive reuse frame of mind, I have longed to turn this building into a book store along the lines of the still-achingly-missed Library Ltd. The South Side desperately needs a substantial bookstore, and after reconfiguring the interior, there’d be plenty of room in the St. Louis Hills Office Center for a Border-style bookstore.

It would be even cooler if our local book publishers could share the space with a bookstore. Maybe some of the smaller independent record stores could use some space. Wow, an entire St. Louis Creative Co-Op would be cool!

If you allow for possibility, the list of what could be done with that building could be endless. And it seems an easy sell because:
1. Prime, High Traffic Area for High Visibility
2. TWO levels of parking already on-site
3. Vast square footage requiring interior renovation (think “loft”)

This building is the crown in the retail tip of St. Louis Hills, a commercial strip that curves over to end with LeGrand’s Market & Catering, and kisses the Starbucks/Bread Co. intersection. Oh, and the Donut-Drive-In, which is across the street. If the Macklind Avenue Business District can come roaring back to life (hallelujah!!!!), then mid-century commercial buildings in St. Louis Hills can thrive (just ask LeGrand’s).

We have just scratched the surface of possibility for this building, and the area it belongs to. This is why the perception of pre-determined extinction of the building based on narrow thought is so upsetting. There needs to be more to this story, and it prompts the questions:
Is there still a possibility of a visionary developer being able to buy the place?

Or, is there a new building and businesses already contracted to go in this space?

What do the residents of St. Louis Hills (and the 16th ward) think about this?

UPDATE
I now have the tragic story of why this building is currently under demolition. The blame falls squarely on the building owners. All the details will be shared in a future post.