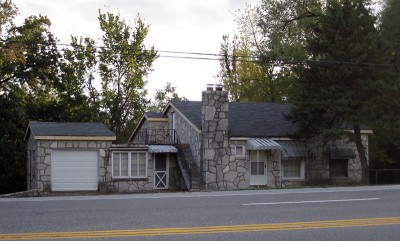 This is a picture of the very last house on the south side of Hwy 67.  It’s past Jamestown Mall, but several yards before the mighty street comes to a whimpering end before a forest.   I always thought this little stone house – built in 1948 – was so charming and so intriguing.  There’s no front yard, but a little over 2 acres of backyard.  But the feature that always caught my imagination was the outdoor terrace created in the space between the house and tiny garage. 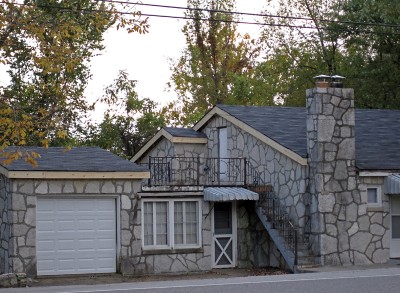 I was both fascinated and jealous when passing by and catching someone using that special spot; how lucky were they?

In 2007, it became apparent the place was empty, and considering how developers were angling to obliterate every inch of greenery for a slight variation on the same retail they had just 15 miles down the road, I figured this place was toast.  But when driving by yesterday, I saw two men working on the house.  They were installing the new fascia you see in these photos.  And then I noticed it was a new roof, as well, and that the LLC who bought the place would only do something like that if they planned to sell it as a viable, 1,389 s.f. home that someone would be happy to live in.

Consider that homes even more substantial and younger than this get sold as teardowns, and understand why my heart burst with happiness over the sight of men fixing this house for its future.  They think it’s perfectly natural to save and re-use this little stone house, those lovable, wacky kids!

6 thoughts on “The Stone House Lives”