Since St. Louis is tearing down modern Busch Stadium for a big brick ball park, viagra then it makes perfect sense to brick up a modern downtown apartment tower built around the same time, right?

Obviously, St. Louisans live in fear of modern architecture, because a project architect for Gentry’s Landing said, “What we are trying to do is humanize the building, and make it seem more approachable and more pleasant.” Local developers feel this can only be accomplished with brick, brick and then some more brick.

It was the World War 2 generation that instituted Urban Renewal, which translated into most major cities erasing thousands of acres of Victorian buildings in order to erect thoroughly modern commercial shrines to a progressive space age future.

In St. Louis, a notorious chunk of Urban Renewal failed miserably, but after the blacks and the Chinese (sorta) recovered from the trauma of being so abruptly displaced, the area that is now the Gateway Arch, Pet, Inc., Mansion House, Gentry’s Landing, KMOX and Busch Stadium has worked pretty well for the last 40 years or so.

Now a younger generation begins to erase the initial erasure, and, naturally, nothing makes as unique and contemporary a statement as brick. So, down comes the white, arched concrete of Busch Stadium for a wide pile of bricks . Hide the large expanses of Gentry’s Landing glass behind a tall pile of bricks. And if we’re lucky, they’ll tamp down all that shiny stainless steel and brick up The Arch!* 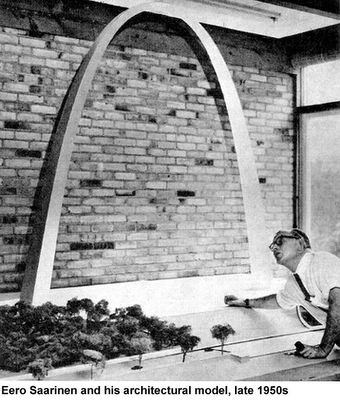 *An architect pal said that what ultimately protects the Arch is that it’s nearly impossible to lay bricks in a catenary curve. Antonio Gaudi could do it, but he’s long dead and gone. Whew!

One thought on “We Brick This City”