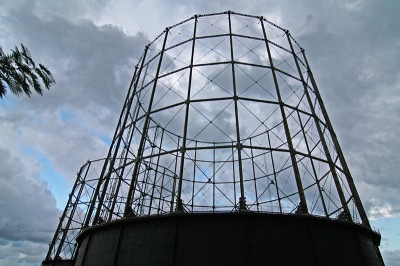 As reported by the Webster-Kirkwood Times, the two gasometers that mark the boundary between St. Louis City and County are currently being demolished.

The natural gas storage tanks owned by Laclede Gas were erected in 1925 and 1941, and have been inactive since 1995.  They sit on just under 6-acres of land, which was purchased by a development firm that plans to grade and seed the soon-to-be-vacant property so it looks “nice” while trying to attract a new owner to build on the site. 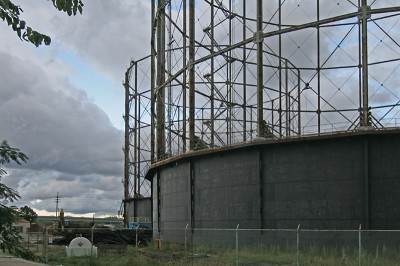 I’d like to know if the property developers even considered selling the property as-is, just in case there’s an entity out there that would like to re-use these iconic and impressive structures for other purposes.   Considering the current commercial real estate market, they may be sitting on this property for a bit, so they have some time play with, and could possibly save themselves demolition fees if a buyer wanted the gasometers to remain.

Are there other uses for such unusual structures?  Vanishing STL covered the demolition of another gasometer in St. Louis City, and in another post about its history, he shares information about how Vienna, Austria re-purposed four of theirs. 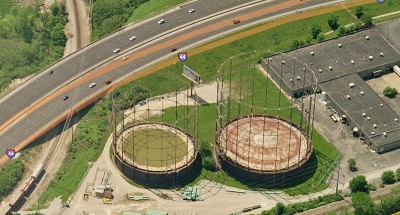 Granted, the highway has locked these gasometers into a remote location surrounded by industrial, so that could limit the scope of new use, but limitations are what inspire some of the most compelling ideas.   It’s depressing that, yet again, there is a willful lack of imagination and possibility about high-profile structures that are part of the Greater St. Louis history.  And there is one more opportunity to squander our last remaining gasometer near Goodfellow, in North St. Louis City.

I wanted to document how most of us experience these twin towers: sturdy yet delicate-looking guide posts along the highway that change size, color and texture with the distance, time of day or weather.  Their absence will matter, and they will be missed.

36 thoughts on “2 More Gasometers Coming Down”