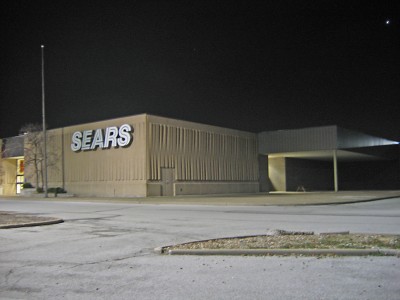 At the end of September 2009, The Urban Land Institute presented some ideas on what to do with a dying mall.  In a pdf of their presentation, they advocate tearing down the existing building and creating a new, mixed-use destination.  This proposal comes after the 2008 idea of turning the southwest (former Dillard’s) portion of the mall into senior housing and office space fell through due to, supposedly, national economic misfortune. 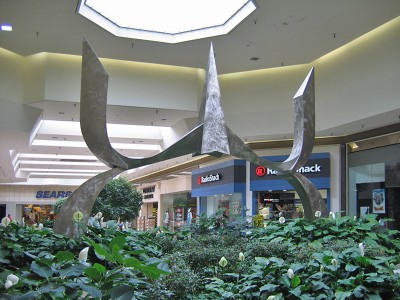 Jamestown Mall originally opened in 1973, shortly after my Mother and I moved into near-by Black Jack.  There were plenty of places to eat, (including a Pope’s cafeteria and a restaurant inside the Walgreens), a movie theater and all the stores my Mother already had credit cards for, so we went there a lot.

I have good memories of the place, like hanging out at the Camelot music store, which  got most of the grade-school and teenager money I had.  There’s also not-so-good memories, like having to pick out clothes in the Pretty Plus department at Sears, which was located right near the mall entrance, so I was in plain sight of high traffic. 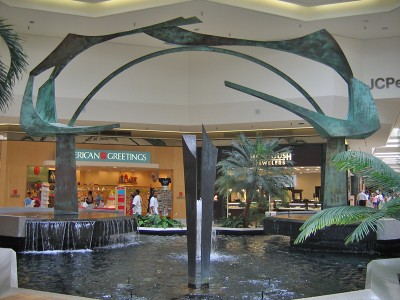 There were high school midnight movies where we were so stoned we could barely walk, so I barely remember The Song Remains the Same or Rainbow Bridge.  There were periods of intense longing over toys in KayBee, gag gifts at Spencer’s and boys in my classes that I never thought twice about until I ran into them outside of school at the mall.

But these are all memories that I can conjure at will as I sit at home.  The last few times I stopped at the mall, none of those thoughts went through my head while walking the mall.  Instead, I was taken with the stainless steel and bronze sculptures that have been there since Day One, and meant nothing to me at the time, but now I think they’re beautiful, and I worry what will become of them if the mall is torn down. 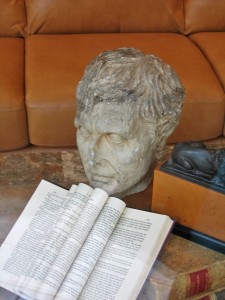 Plaster bust of the late Fred Wehrle, property of the downtown Famous-Barr display department, which eventually made its way out to Jamestown Mall.

Buildings are historical proof that hold memories , which is one of the reasons people get upset when certain buildings are slated for demolition.  In the case of Jamestown Mall, it denotes a distinct period of Boom Town development in far North St. Louis County, and it holds plenty of memories, but the structure itself is unmemorable because it was purposely designed for all the action to be internal, so how it looked from the outside was an afterthought.

I loved everything about re-purposing a portion of it for senior housing, but since they’ve let that useful and innovative idea go, I’m completely on board with them leveling the existing mall and starting anew.  But I am completely against the suggested new use for the land.

Take a look at the aerial view of the mall and the surrounding area and note how much green there is around it.  Even with decades of new housing going up, this part of North County – out where the mighty Lindbergh Boulevard ends with a lackluster whimper – is still awesomely rural, verdant and never completely tamed.  High density retail and residential kind of peters out northeast of the New Halls Ferry & Lindbergh intersection, and large swaths of rolling hills still hold working farms (there’s still a barnyard animal feed and supply across from the mall on Lindbergh because the area needs one).  The Bubbleheads thrive out there for a reason – it’s woodsy seclusion sometimes interrupted by suburbia. 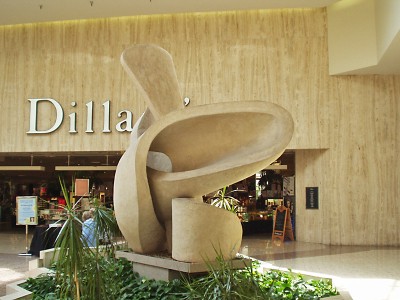 A concrete abstract sculpture that stood outside Stix/Dillard’s is now missing. Where did it go to?

It was a weird gamble to put a mall in an area so far off the density grid.  For the first 15 years of its existence, the only other non-Lindbergh way to get to the mall was via a winding, hilly back road with dangerous curves and a rickety bridge over a snake-ridden creek that only us locals used.   “Over the river and through the woods to Grandmother’s mall we go…”

But it was a successful gamble for awhile, because there was nothing else like it in this remote area.  It was truly a shopping destination for St. Louis North Countians and those over the bridge in Alton, Illinois… until they got their own Alton Square.  And Northwest Plaza had more of the big stores, and wasn’t all that much further the other way up Lindbergh. And then retail trends changed to several Big Box lots spread throughout a municipality and Jamestown Mall became the remote island of Misfit Stores. 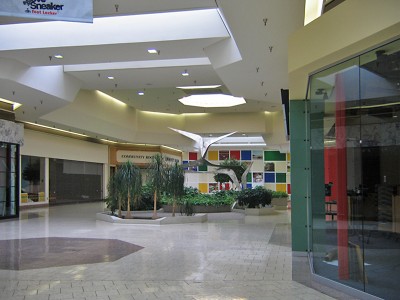 The dead end of Jamestown that was slated for senior housing and office space.

The ULI proposal recognizes how remote this location is, so logically suggests that it be turned into a bells and whistle mixed-use destination, a place so chock-full of everything and the kitchen sink that folks from all over the region will be itching to go there… until the newness fades away into the next Retail Destination dog and pony show that’s easier to get to.

They also propose that the new use have a Vegas-like reenactment of urban density, which is flat-out silly when you glance at the distinctly rural qualities of the areas surrounding it.  Florissant shouldn’t spend millions on a New Town, Part II.

I propose, instead, a totally original mixed-use idea that takes into consideration the area and its flavor and gives people something they can’t get anywhere else so that they are totally willing to come from all over to have a crack at it, repeatedly. 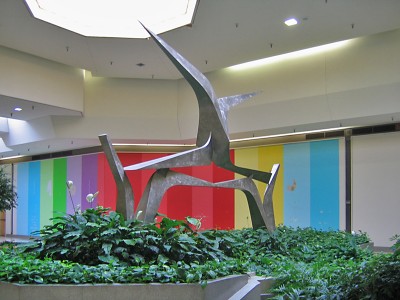 From the current proposal I’d keep the ice hockey pond and the farmer’s market.  To stick with the sports theme, let’s go extreme: could someone finally give our area a full-blown skateboard park, please?  Also add a bicycle motocross course.  Some of the original building foundations could be left in place for both of these items, and because we don’t have anything like this currently, they’d pull a steady stream of people all year long totally willing to pay to play.

If one or both is too radical an idea to consider, maybe pay homage to the horse culture still existent in this part of North County, with something similar to Pere Marquette Stables?

Expand the farmer’s market idea by also creating a pick-your-own vegetable garden.  Think Eckert’s apple orchard, with people paying to pick their own local vegetables that they know comes right from the ground.  There’s plenty of room for seasonal harvests like strawberries in the spring, pumpkin patches in the fall, and just like Waldbart Nursery nearby (let them sponsor it and support local business), chop your own Christmas tree in the winter.

Right on the Old Jamestown and Lindbergh corner I’d slap down a restaurant that naturally features seasonal food that comes from the gardens, and a cafe for hot or cold beverages and treats, depending on the time of year.  And so I don’t have to worry about the fate of the Jamestown Mall sculptures, move them into an outdoor sculpture and water garden for a unique dining-outdoors experience.

Any or all of these ideas would cost far less to develop than what is proposed, and promotes a sustainable, outdoors, healthy agenda that is not dependent on fickle retail trends or just-add-water urban islands inappropriate to the area.  Even with our crap economy, they could begin with the gardens on existing empty land while demolition happens on the mall, so that everyone can see innovative progress happen in stages, and even take part in the process.

Are these far-fetched ideas, or is it do-able?  Do you think it could pull people from all over the metropolitan area and contribute meaningfully to the area’s tax base?  And what are some other uses for the land other than the cliched ideas being proposed?

37 thoughts on “Tear Down Jamestown Mall”