A tad north of Jamestown Mall in Florissant, case MO, medicine the Behlmann family’s horse farm was sacrificed so another Insta-Suburb (just add water and sod) could help tame the greenery problem that has plagued this part of the county for over a century.

After the horror of construction crews ripping out hundreds of mature trees, it was easy to ignore this settlement going up, because it looked like more of the same. But at the entrance to the fledgling Behlmann Farms (did the family insist their name be used, or is it just the tradition of naming a place after the feature exterminated?) standing far apart from the rest of the class is this unusual structure: 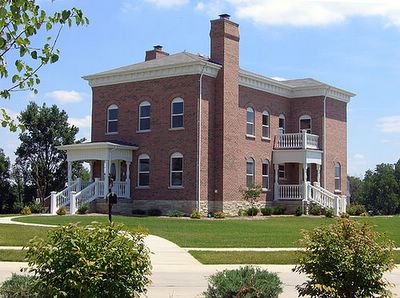 I say “unusual” because it’s actually very attractive. One could go so far as to call it Italianate without the slightest bit of sarcasm. The developer somehow got the courage to revive the grand tradition of American Revivals, a roughly 100 year period in our country’s residential history where homes were based on various centuries of European architecture.

Everything else in the subdivision (above left) follows the played-out trend of too much windowless vinyl rudely interrupted with some off-color remarks by sheets of brick façade, and don’t forget that the garage is waaay more important than the front entrance. McBride & Son did throw a bone of courtesy to mailmen when they constructed these lovingly crafted Mailbox Kiosks (above right). But these examples further highlight just how special the model home is: 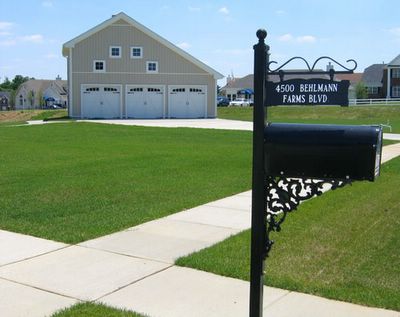 It has a detached 3-car garage building and its own mailbox! This one house is staging its own Urban Retro Revolution, and if I had truckloads of disposable cash, I’d have even more of these houses built, just to keep that freak flag flyin’… until I saw this on the very back side: 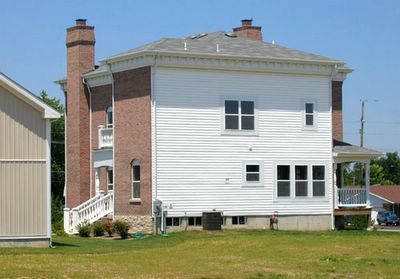 WHAT?!?!?!?!
Did they exhaust the brick budget too early? Is there a zoning law that requires a certain amount of vinyl must be used? Did they purposely design this to be the chive on the tooth? What is the logic behind this? Look, if someone is going to pay nearly $300K for this house, the least they could do is carry out the brick theme on all sides of the house!
Man, talk about getting’ punked…