Last Season at Busch Stadium
Downtown St. Louis, MO
Breaking down the elements into outline form, I aesthetically love the current Busch Stadium because it lends a delicate airiness to the Lego blocks of the downtown skyline. The beginnings of the new (to the left, above) juxtaposed with the old stadium highlights Chunky vs. Sleek, and considering how huge our bodies, cars and houses are, a chunky new stadium makes perfect sense. 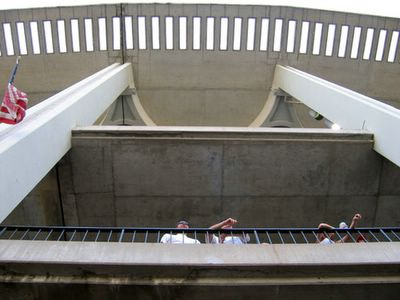 In the Spring of 2003, I was part of a small committee who tried to save Busch Stadium. A new stadium was going to be built, but we came up with alternate uses for the existing stadium, in hopes of keeping it and incorporating it into “Stadium Village” (any more word on that promise?). If the owners had situated the new place just a few blocks further south, the existing place could have served as St. Louis’ version of the Roman Coliseum. History preserved and reutilized for all manner of public events, retail and restaurant establishments, and a natural meeting and hanging place. The owners could have saved millions on demolition costs, and still made money from rental fees. 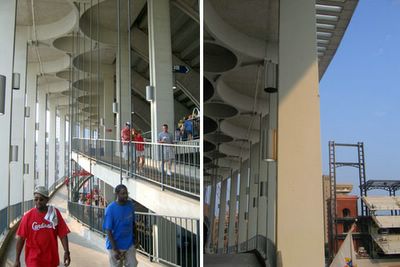 During this same time, I had a marketing job interview with a downtown architecture firm. Half way through the interview, it was revealed that the firm was part of the stadium demolition team, and thrilled to be partnered with the powerhouse HOK because of it. My gut reaction was “I’m staring into the eyes of Beelzebub,” and I mentally shut down, purposely steering the interview into the ground. Even though I was desperately unemployed, I didn’t want to be considered for the job.

I’ve never been down with the concept of allowing sports and retail profits to dictate civic and community evolution. Old vs. new, this story is filled with truth, propaganda and sentimentality. It was the sentimental angle that brought me to the ball park on Saturday night to visit the place one last time, take tons of photos, and say goodbye.

I choked up quite a few times while reflecting on both my personal past with the stadium, and the glorious baseball history that’s soaked into the concrete walls. I got lost in the sad poetry of crudely painted RedBirds (above left) and historic home run spots (above right) that won’t – and can’t -make it to the new stadium.

And I’ve never taken for granted these views from the stadium. No matter the decade, it’s always thrilled, even when a particular game didn’t. The arc, the Arch, the sweep and swirl of energy, and all the pieces that combine to turn a structure into the nucleus of a proud and glamorous era.
I don’t want to give this up.
Why are we giving this up?
Yes, I know the truth, the propaganda and the spreadsheets, and I resent the owners’ tugging on this city’s raging sentimental streak as they milk this season’s long goodbye. But I suppose there’s money to be made from that, too.

Speaking of money, I highly doubt that I will ever pay to see a game in the new stadium because A) I won’t be able to afford it, and B) I refuse to put my money in their coffers because C) we all originally voted against this idea. If someone pays my way, I’ll visit the Retro Brick Theme Park, and stare wistfully off into the distance where the last graceful cookie cutter stood, remembering how much I loved the old place… It’s going to be a long, mournful summer, and a bittersweet fall (since the Cards will go the distance).