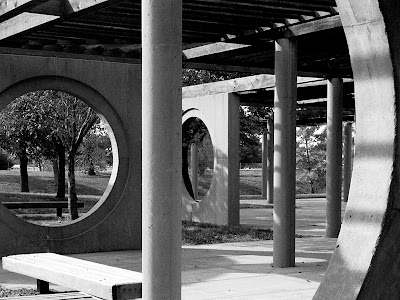 So Barnes Hospital gets Forest Park East, and it’s an anti-climactic outcome. But there was some drama in the form of St. Louis Comptroller Darlene Green and Board of Alderman president Jim Shrewsbury being dissenting voices about the deal. It doesn’t take much imagination or verification to figure out that they both got a stern talking to about kicking up a needless ruckus over this deal. So, if you have to cave in, you might as well get something useful out of the capitulation.

What truly bothers me, though, is that the extraction of a little lemonade from a sack of lemons (aka, politics as usual) is being spun as a racial issue, with Green cast as the Bad Girl Who Almost Ruined It For Everyone. It’s dirty and transparent politics. So, it was a pleasant surprise for the St. Louis Post-Dispatch to print this reader’s letter on February 28th, 2007:

Former President John F. Kennedy would be proud of Comptroller Darlene Green. As she navigates through the decision-making process concerning whether or not St. Louis will allow a powerful hospital to extend its lease of part of Forest Park, Ms. Green has displayed many of the characteristics Mr. Kennedy wrote about in “Profiles In Courage.”

Ms. Green has been able to stand up to society’s pressures while she tries to make life better for her constituents in North St. Louis. Ms. Green told a powerful institution no, she told powerful political players no and she told some of her allies no. Most importantly, and I think Mr. Kennedy would agree, Ms. Green is able to compromise to achieve the best possible outcome for all involved.

The people of St. Louis should thank Ms. Green for her courage and continue to vote for her and not be swayed by any retaliatory campaigns waged by her political adversaries.

While his words are a tad overdramatic, I wholly agree with the point, and it reminded me of the last time she spoke out of turn.

When the City wanted to hand over millions of dollars to Pyramid, Green spoke up about that being a bad business deal. It’s one of her job duties to protect the city’s fiscal interests, but it was useless for her to apply fiscal logic because the deal was going through no matter what. Still, she recognized right and wrong and was brave enough to go on record as strongly disagreeing with the deal. This kind of ethical behavior may have her marked for a horse head in her bed, and I admire her resolve in trying to represent some form of honesty as she commits political suicide. Someone with that kind of integrity can serve better outside of politics. 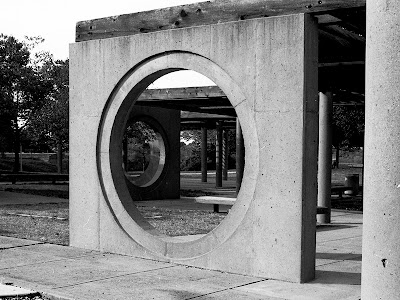 I once spent a summer and fall on this property taking tennis lessons. The instructor was always late, so we’d hang out in the playground, or I’d take b&w photos of the sculpture garden shown in these 2 photos. The racquet ball courts were rather photogenic, too, and I was pleased to see a haunting night time photo of them by Eric Post about a year later.

On the first day of lessons, a fellow student said, “I never knew this place was here.” To which another student replied, “Yeah, it’s mainly for the Barnes people.”

While we played tennis, Barnes Hospital loomed over us to the north and the east while Barnes employees parked in the garage lurking under the ground we ran upon. It was obvious that Barnes employees were using the facilities while we were there.

When I went digging for the negatives of these photos, I chuckled upon seeing my handwriting on the negative sheet identifying it as “Barnes.”

Meaning, I always naturally assumed this land belonged to BJC, as there was nothing to indicate otherwise. To be honest, I was shocked to learn this land belonged to Forest Park when all this controversy began last year. But then it all made sense since I could never quite understand why the hospital was so nice about providing these wonderful park-like accommodations to their employees. Turns out it was Forest Park providing amenities that only Barnes employees knew about.

I understand and agree with the Forest Park Protectors side of the argument, but to have ever stepped foot on that property is to understand that the horse done fled the barn long ago. Trying to close the stall after the fact is a moot point. All this circumstantial evidence and political/financial power doesn’t make it right, but it was rendered inevitable decades ago.

It’s kind of sweet that City Hall and BJC even let any of us in on this at all, and that they were nice enough to throw some chump change at the city parks system. It’s kind of like getting a year’s supply of Rice-A-Roni for having been a contestant on The Jokers Wild. Hey, worse things than this can happen, and they always do.