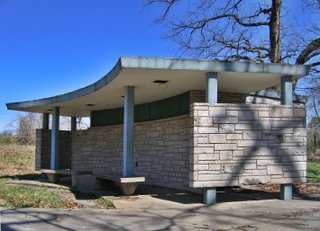 Carondelet Park
St. Louis, MO
I’ve always loved the shape of this restroom building, especially how the front pillars end atop the benches. There’s a pair of them in the park; the one above is on the far eastern end, near the giant mulch piles, the other at the tennis courts. Both are closed.

Considering all the improvements that continue at the park (the new walk/bike path is excellent, and thank you for reactivating all of the drinking fountains), maybe they’ll revive the mid-century mod bathrooms.

Mod baths in old city parks is a common sight, especially on the North Side. Wonder if there was a major Parks Beautification bill that went through City Hall sometime in the late 1950s? I’ve thought about documenting all of them, but hanging around city park johns with a camera doesn’t seem the wisest thing to do, know what I mean?