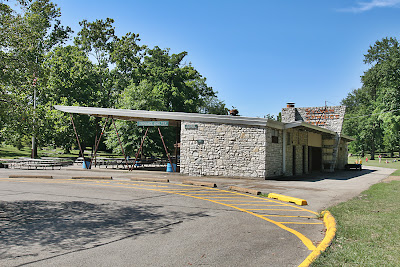 Sylvan Springs Park, South St. Louis County
Whenever Rob Powers is in town, we usually find something new and wonderful. This time, by simply turning down a street I’d never been on before, we saw the above sight. 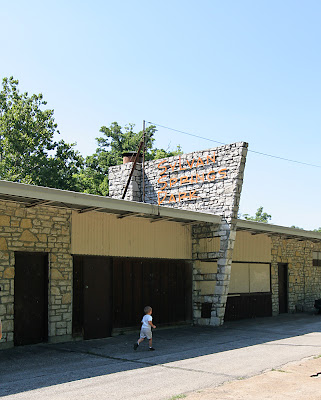 My first impression was a quintessential drive-in concession stand plopped into a bucolic setting. Sylvan Springs Park is across from a back entrance to the Jefferson Barracks cemetery on Sappington Barracks Road. The reason Ordnance Shelter resembles drive-in architecture is because it was built in 1955. 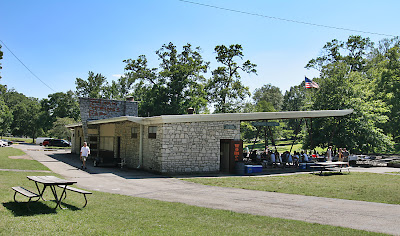 The concession stand at the rear of the building is boarded up, but the rest of the shelter is business as usual, with a family (who were very cool about us taking tons of pictures) picnic taking place while we were there. 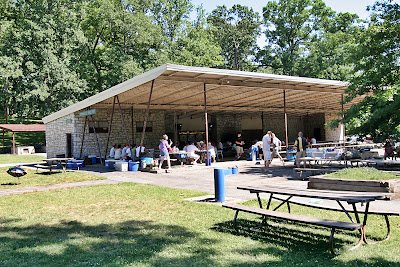 Ordnance Shelter looks out on a courtyard with short stone walls and small stage, lending the entire setting a quaint Jellystone Park vibe. While I circled the building in blissful disbelief, Powers – who is a working architect – was able to note that the building was in need of some serious repairs. This immediately brings up the fear that rather than repair it, the parks system will simply tear it down. This fear is compounded by the jinx I carry with me: if it’s a great example of mid-century modern still in use and I love it and photograph it, it will come down.

Some quick internet research shows that a skateboard park is planned for a spot north of Ordnance Shelter. I’m asking for the same thing at Carondelet Park, so it’s thrilling to know someone else had – and acted on – the idea. A 2003 Master Plan shows several suggestions for revamping the park, with most plans leaving this shelter standing. But one of slides shows it, too, being revamped slightly. So, fingers are crossed that its essential spirit remains unbroken. 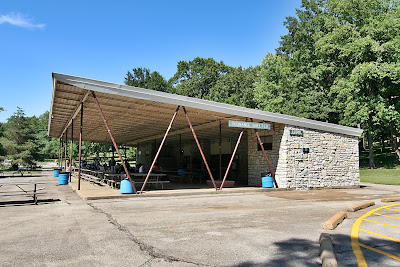