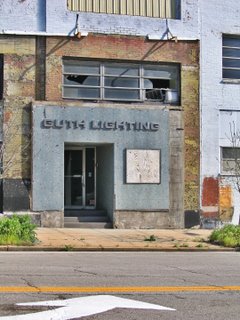 2600 Block Washington Avenue
St. Louis MO
The westward evolution of downtown St. Louis is a precise architectural timeline, with the oldest buildings closest to the river, the youngest peering earnestly over the city/county line.

In the heart of downtown St. Louis they’ve destroyed too many historical skyscrapers to create modern skyscrapers. In Mid-Town, mid-century was about tearing down chunks of less old buildings to inject some modern into the industrial and entertainment area.

Guth Lighting has been in business since 1902. They moved into this building (above) when it was brand new in 1948. They moved out sometime in the very early 2000’s, and permits show that in 2006, someone intends “60 units” in the future. 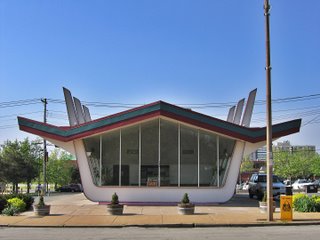 3504 Washington Blvd.
Heading west towards Grand, this building (above) appears to both soar and hover among low-slung industrial buildings. Just one block east of The Fabulous Fox Theater, it sprang to life in 1969, and could someone please recall what it was originally? Please. 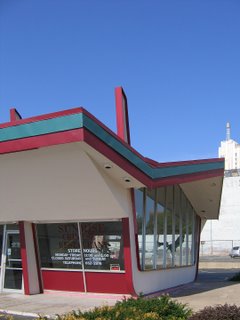 In defiance of the expiring streetcar lines, this building was part of Mid-Town’s late 1960s stab at accepting the permanence of car culture. The other Automobile Outreach building is our UFO at Grand Blvd. & Hwy 40. Built in 1968 as a Phillips 66, it became a Naugles before morphing into Del Taco. Both of these buildings are freakishly cool, and how they’ve managed to survive the never-ending development upheavals of the area is a mystery. 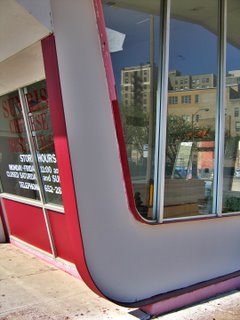 This Googie specimen is now Sunrise Chinese Restaurant. That it looks like a cross between a bird in flight and a dead bug on its back is not the best mix of imagery for a fast food joint. But the building really does overshadow its function, and the restaurant did get an A rating from the food inspectors. 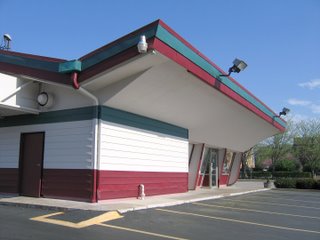 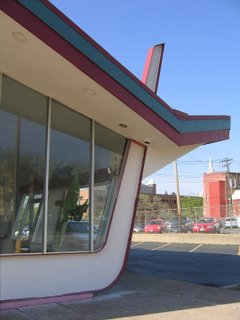 The salad bowl with a chevron lid is in real good condition, and the kind of building that was designed for people to gawk at. So, I was a little dismayed when the owners asked why I was photographing it. You think they’d be used to it. 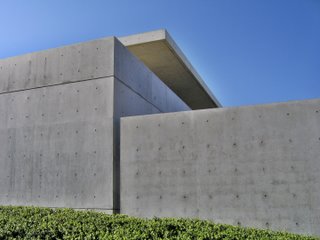 Pulitzer Arts
3716 Washington Blvd.
Come the dawn of the 21st century, Mid-Town is still taking gutsy steps towards continuing St. Louis’ (not as celebrated as it should be) modern innovations. See the “making of” of the Tadao Ando-designed art museum (above) on their website, for more on the innovation tip. This and the Contemporary Art museum prove that modern still has a place in our city, and most certainly in mid-town… 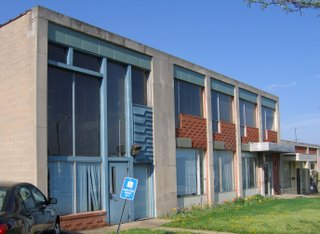 3800 Block Washington
…since in 1957 half the block between Sarah and Vandeventer went Modern Village. 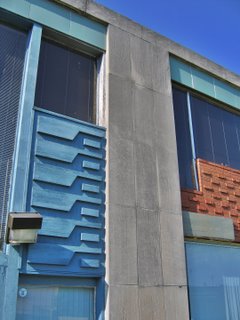 This is a fascinating chain of buildings, like a sample board of mid-century styles to choose from. The building above is part of the Loyola Academy, a Jesuit boys’ school, and has some wonderful textures and colors. 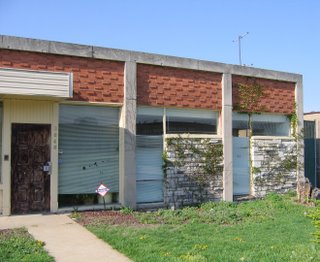 Next door, the varigated brick continues the theme before dropping off into limestone screens. This section belongs to the Celestial Temple of Peace. 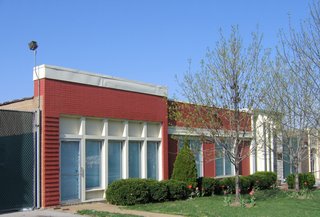 Above, a miniature version of Suburban High School Modern… 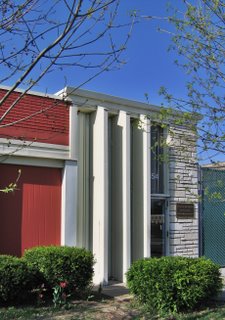 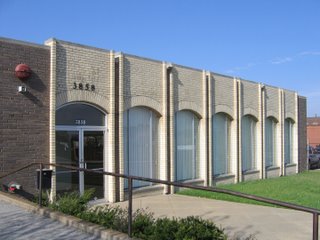 And the chain ends with a 1964 addition I call Kroger Modern, which now houses the Fortitude Foundation. The entire complex is now so low-key that it’s easy to overlook it. First glance reveals a level of dishelvement, but all the buildings are in use, and have aged well. I wonder how people reacted to this modern string of buildings back in the day; it’s such a novel concept to tear down existing buildings to put up a theme park of modern facades. But that it’s still here and functioning is a testament to a good idea.