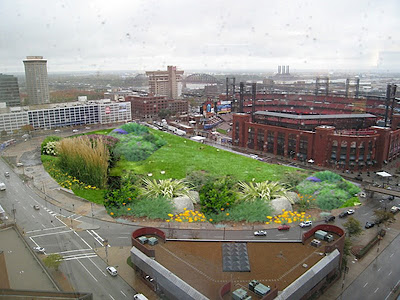 “Truth is, people have known from Day One that Ballpark Village is a bad idea. That was obvious when the city made the owners of the Cardinals sign a guarantee that they would build the Village — or else there would be financial penalties. That was an ominous sign.

If a business idea is good, you don’t need to negotiate guarantees and penalties. Business people act on good ideas. They put their own money into them.

If you have an ocean, you don’t need to negotiate with businessmen to make sure they will build on oceanfront property. They just do it. For that matter, if we had a lake — Chouteau’s Pond, for instance — entrepreneurs would bid against each other for waterfront property. The city would not have to negotiate guarantees and penalties to make sure that something was built.”

To his accurate observation I would like to add Evidence A: “Oh yeah, we’ll save Keil Opera House if you give us a new hockey stadium.”

In the week’s worth of articles over the bust-up of the Centene deal, the worst idea I heard is the suggestion that because they have to do something with that unsightly hole by the time of the All-Star Game in 2009, just pave it up.

What?!
Pour concrete all over it? Oh, that’s bloody brilliant.

Please, throw down grass seed, plant some ornamental grasses, bushes and flowers and let it be a GREEN hole as it sits festering. Then when the day comes that some private enterprise completely unrelated to the Cardinals’ deal buys the property, they won’t have to pay to excavate concrete. Concrete, which adds to the heat in the city, adds to the infills.

Green causes no harm.
Oh, and green is cheaper than concrete, and since we city taxpayers are financing this hole, can we keep the price tag down, please?

Up top, I borrowed a photo from Steve Patterson’s Urban Review, and doctored it to illustrate my idea. I left an open space for people milling outside the stadium to access. I love the thought of artfully placing some giant plywood partitions in the clearing and sponsoring a kids’ painting day. Mayor Slay can pick the theme. And all of this can be done THIS season; imagine how lush and inviting it will look by the time national camera crews arrive in summer 2009.

The institutions responsible for the Ballpark Village mess need to take this lemon and make lemonade, an ice-cold, frosty glass of lemonade we can sip in the lush splendor of Ballpark Park.