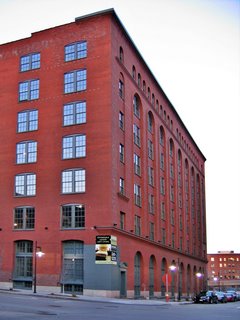 Out of the blue in early February 2006, an e-mail asks: Can your photos be blown up to poster-size? Specifically, the Charles Schmitt shot? 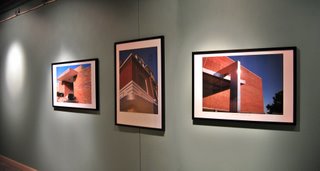 That brief message ended 2 months later with 25 of my architecture photos enlarged to 2’ x 3’ and framed to hang permanently inside the renovated Cupples Station apartment building. (Above, L-R: South Hampton, Arsenal & Northland) 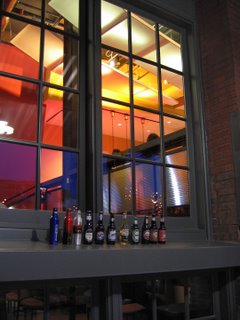 On April Fool’s Day I got to see some of my prints installed in the building, which is now actively seeking renters for the spaces that remain. On this same day, Pablo Weiss opened his newest restaurant, Mercury, which occupies a bottom corner of the building (above). It’s a minimalist twist on the sports bar. The interior is simple and lively, the outdoor bar area is ultra appealing and will provide what this part of downtown needs: street life. 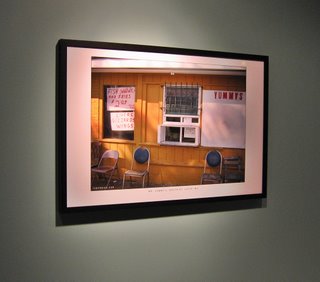 My photos hang opposite the elevators on all 7 floors of Cupples. While on the tour, every time the elevator doors opened, I felt an odd sensation. It’s a new experience, so I have no idea what to call the sensation. (Above, Mr. Yummy’s) 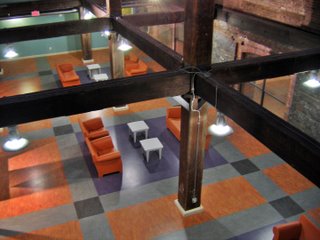 The main atrium of the building (above) keeps most of the industrial warehouse intact, both by design and because some portions of the building were built for no man to ever tear asunder. The “affordable rate” apartments carved out of this gigantic space come in various dynamic configurations, and they actually are affordable. Not affordable as in “cheap for downtown,” but as in giving people who make, say, under $30,000 annually a chance to live in attractive, spacious city apartments. Which is a welcome concept, especially since the living quarters currently brewing all around this building will be the typical uber-expensive condos and lofts that exclude the majority of folks who would like to live downtown. So, I’m proud to have my photos hanging in a handsome rehab that my friends and I could actually afford to live in. 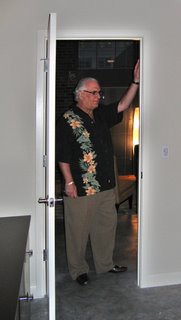 Above is my “patron,” Ron Silverman, senior vice president of Historic Restoration, Inc. He’s a Beverly Hills, CA native (with some lively tales of the late Ambassador Hotel) who’s a genuine fan of both high- and low-culture. One of the perks of his position is picking the artwork that grace HRI rehab projects.

The day Silverman gave me the tour of Cupples under construction, he mentioned picking the paintings that hang in the Renaissance Grand. I told him that he picked some paintings from a good friend of mine.
“Really?” he said. “Which artist?”
Dominic Finocchio.
His immediate reply was citing exactly which floor those paintings hung. Now, Silverman selected over 20 artists over 3 years ago for this project, yet he still had instant recall of just one of the painters and even remembered exactly where it hangs! At that moment I knew that this man truly loves art and I was honored that he’d gone out of his way to find me. 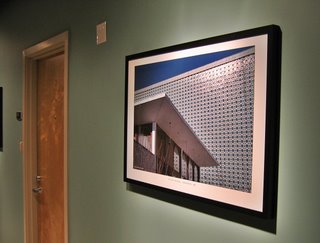 (Above, River Roads) Silverman is only “half-committed to the Internet,” but that’s where he started when looking for art to go into Cupples. During a random search, he found an image that caught his eye, and followed the paths which lead to me. Then came his brief but momentous e-mail. He’d noticed that many of my photos were about buildings dieing or dead, and thought, for a change, I might like to be a part of a once-comatose building coming back to life. Correct assessment. 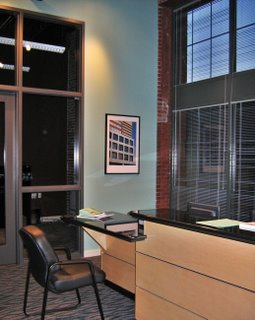 (Above, in the leasing office, Downtown St. Louis) I was already a long-time fan of HRI because The Statler (which became the Renaissance) and the Merchandise Mart (the inside of which I used to spelunk on lunch hours while it was boarded up and vacant) had always been 2 of my favorite downtown buildings. To watch them brought back to life was a joyous process, and to have it done right was a bonus. 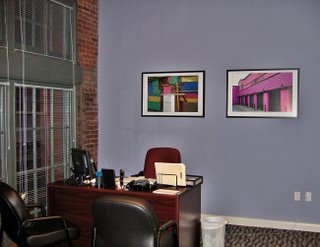 (Above, in the leasing office, L-R: Wellston Mondrian & Charles Schmitt) I had put together a portfolio of 40 images for Silverman to pick from. His choices were all St. Louis city and county buildings, with a good chunk of them no longer in existence, or threatened with extinction. As I went through the exacting process of converting images for large format and working with the man who printed the posters, I felt this odd sense of detachment. It was like looking at someone else’s work. Then I surveyed the big box of finished posters and got the biggest kick out of seeing my memories enlarged. I’m still amused by personal adventures being thought of as art. I’ve spent years getting dirty, violating private property and meeting all kinds of interesting people because of it, and now some of those moments are hanging like casual museum pieces. Wild. 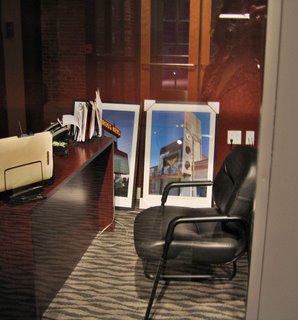 At the time of the viewing, the rest of the photos were waiting to be installed (above, Cross Keys and Natural Bridge Road). My thanks to Ron Silverman for this unique opportunity to be a part of the Cupples Station project.