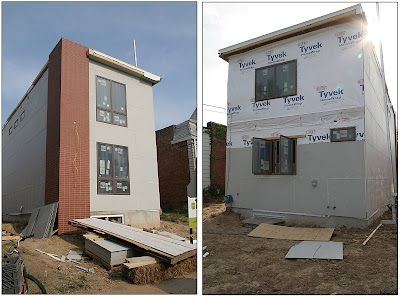 Pennsylvania & Juniata, South St. Louis, MO
If it’s Wednesday, it must be green!

Last Wednesday (5.16) was the Skyhouse reception, full of beautiful people checking out a beautiful building. After pouring over the impressive model of the LEED-certified building, a designer friend and I – at different times – both asked one of the developers if there would be any restrictions on what kind of window treatments could go up. Wisely, the architects and developers are leaving that up to the future condo owners. But trust me, the minute a plaid curtain goes up in one of those sleek, reflective windows, a charter will be created to abolish it. Rightly so.

This Wednesday was the “sneak peek” of the EcoUrban home under construction in Benton Park. I couldn’t make the official tour, but did pedal over this evening to take an informal snoop around (above left – the front, above right – the back). 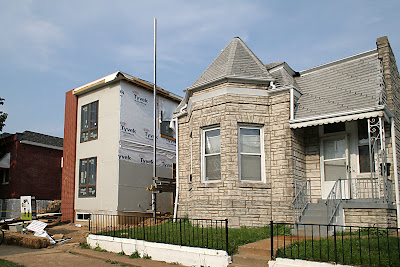 Nestled mid-block, the sight of the building is pleasantly startling, while the scale is absolutely appropriate to its neighbors. Then the sound of a nailgun sounded from within the house, and thus I met the guys working overtime inside. As a marketing coordinator for a design-builder, I know the tricks to conveying a message. But if you want the truth, talk to the carpenters on site. 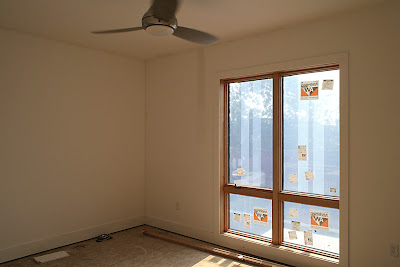 (Above, southern light pouring in the 2nd story window) Green construction is a new adventure for experienced carpenters, and in the case of this EcoUrban home, it’s been a smooth job. They are loving the low-VOC paint because it doesn’t burn their nostrils and it dries ultra fast. They are digging the materials being installed: bamboo plank flooring, cement board siding and ultra sleek Italian kitchen cabinets. They know this house is built well and built to last, which just proves one of the basic concepts of green building: build it right, build it tight. Such an old fashioned concept now so modern.

After years of hearing carpenter complaints about the crappy quality of so many new homes, it’s a rare treat to have them wax enthusiastic over this one. Makes me wish I could afford one of these babies. 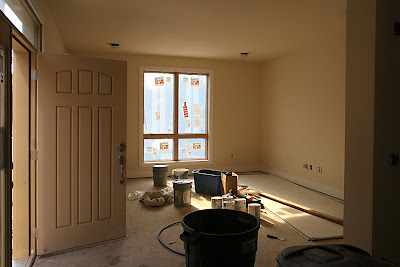 (Above, the front room at ground level) Last Wednesday was also a green day for Bill Clinton as he spoke at the C40 Large Cities Climate Summit. The New York Post reported that:

Clinton talked of “greening up” all the black tar roofs he sees from his Harlem office. Besides lowering the temperature inside on a 90-degree day to 80 and saving energy, the landscaping needed to do this on 950,000 city buildings would create jobs for unskilled workers. “You can’t outsource that work,” said. “Someone has to be up there . . . and you can’t do that from .”