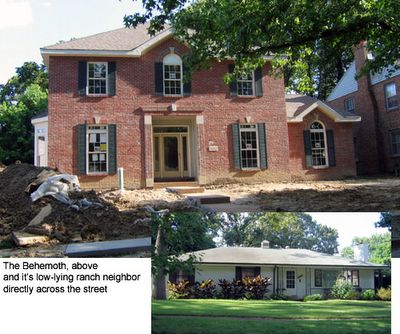 High School Road & Lawn Avenue
Brentwood, MO
There’s an imposing, sore thumb underway in the heart of suburban Brentwood. A subtle, horizontally meandering ranch (much like the one remaining across the street) went up for sale, and someone bought it to do that trendy Teardown thing.

The trouble with Teardowns is precisely described here, and this intersection neatly captures the concept. A mixture of appropriately scaled bungalows, ranches, 1.5-story and 2-story homes get a dose of steroids in the form of a new construction that could be described as…well, Post-Modern Greek Colonial Federal Anti-Lawn Revival. While it’s no taller than the houses directly next door to the west, it does have that bloated, too-much-high-fructose-corn-syrup look common to deep West County McMansion developments.

That the new construction is trying to elbow the other houses out of the way is most evident when approaching the house from the back (pictured below). Heading north on High School Rd., first you see a long row of garage doors spring out of a cluster of trees, then 2 gigantic bay windows pop out like Double D’s on Olive Oyl. Mere feet away from the stop sign intersection, and you can literally feel the compression, a massive wall of doors and windows slamming into the street, threatening to bulldoze the bungalow across from it.
Every time I drive past, my left shoulder instinctively flinches away to keep from hitting it. I worry that the neighbor’s vegetation might not adapt to having the sun blocked out. Does the rest of the neighborhood find this is a welcome addition?

3 thoughts on “Inappropriate in Brentwood”