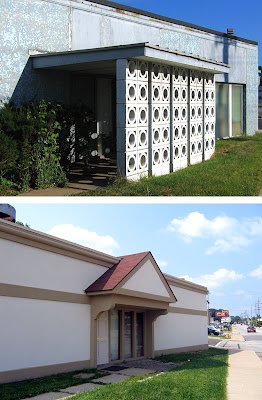 Woodson Road & Ridge Avenue
Overland, MO
Next door to the venerable Woofie’s hot dog stand was a pale reminder of former MCM fabulousness. But after a recent remodel, it now looks like an elongated KFC. 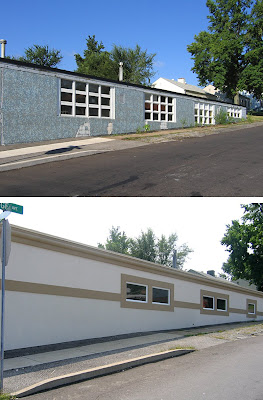 I covered this building as part of a previous post on Overland mid-century modern (scroll down to the 60% mark), wherein I wished it could get a good scrubbing and some repair TLC. Instead, I feared it would eventually just get torn down.

I drove by about a month ago and saw the beginnings of some construction work, and hoped for the best but expected the worst. And sure enough, its Low Rent Palm Springs aspirations have been covered over with tan and bland EIFS. 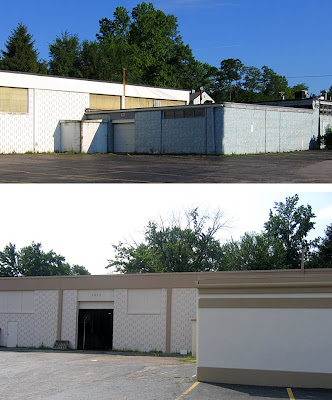 Aside from the application errors of EIFS, I’m going to make a safe guess that they did not correct any of the water and decay damage before covering it up. Just like they cover up old dirty brick in need of tuckpointing with vinyl siding on the rationale that “what you don’t see can’t hurt you,” it only masks the damage that continues under the new facade.

U.S. Band & Orchestra spent some good money on this renovation, so I hope it was done properly, for investment sake. But they covered up a lot of windows and that new entrance bit is just plain awful, and a big company sign would help with that dull expanse of boredom. One compliment: the warehouse portion still retains most of its original material and actually looks better defined with two tones. 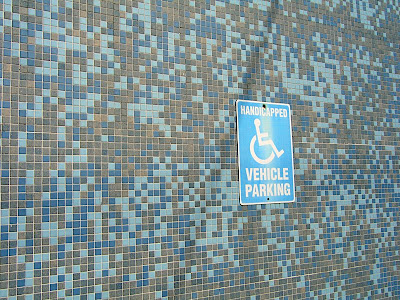 Look, I understand that these improvements are a favorable thing for the company and the immediate area. I also understand that slapping on EIFS and some replacement windows is more cost effective then rehabbing a light manufacturing building that only I thought was cool. Status quo rules for a reason, and the new facade is considered “pleasing” by retail big box standards. But I miss its raggedy ass, and with each drive by, I will ponder all that tiny blue and gray tile forever preserved under synthetic stucco, and smile.