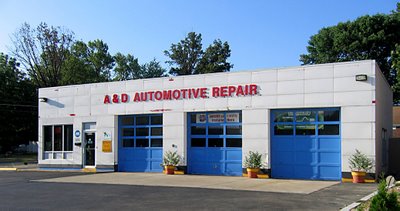 Lately, Overland is notorious as the township with the deluded, egoistic mayor who refuses to relinquish the burning castle. Aside from City Hall ineptitudes that have inspired so many of its citizens to blog, Overland is a nice town; completely suburban, yet old enough to have been formed to urban standards. There is a formal downtown nucleus that spreads out into little tract homes, and at Christmas the main drags are festooned with the exact same lighted decorations decade after decade. Overland retains so much of its original fabric that it often feels like touring a museum of post-World War 2 Baby Boom suburban expansion. Yet the place is alive, feisty and curious in a low-key manner, which keeps it off the hipsters and aggressive developers radars. 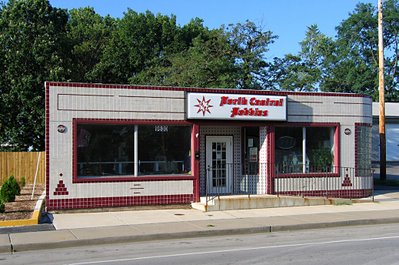 These photos are a fair sampling of the commercial buildings along Lackland Road, right in the immediate vicinity of Skeeter’s Frozen Custard. Generally, they were all built between the end of World War 2 and 1955. 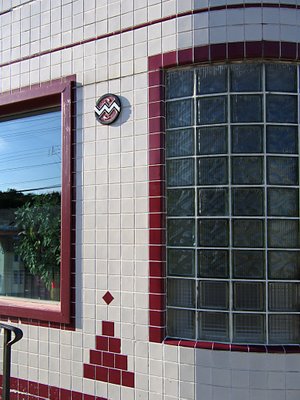 This particular building has changed hands many times (it was an upholstery shop for the longest time), with each new owner never feeling the need to radically alter its appearance. And I’ve noticed that about this entire stretch of road: the commercial buildings don’t stay vacant for very long and they seldom get radically remodeled. Some may say that a lack of apparent progress is the sign of a stagnant city, but I see Overland’s constant, gentle ripples as a city finely balanced. 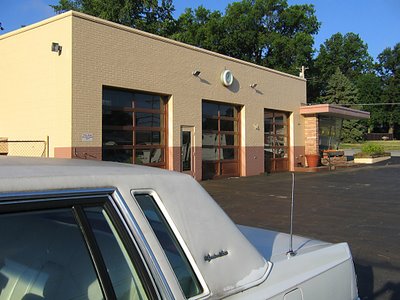 One of my favorite examples of Overland being satisfied with its resources is the above service station. Walking onto the parking lot is like swooshing back in time, with that time being kept by the very same clock that’s graced the building since it went up in 1954. 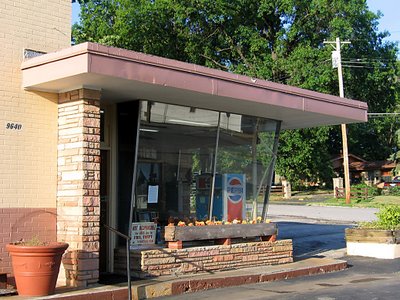 The only major change the decades have wrought is the removal of the gas pumps. Other than that, it’s business as usual, utterly neat and tidy and friendly. 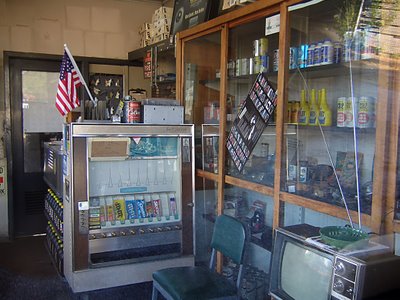 What year was this photo taken? The only thing that betrays 21st century is a package of blue M&Ms and Skittles in what is most likely the exact same vending machine the original owners plopped into that office 53 years ago. 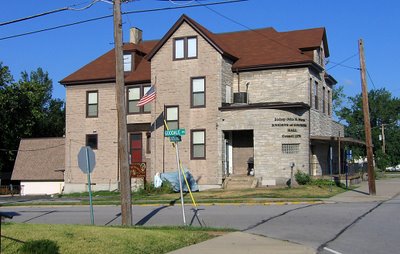 Heading east on Lackland and crossing over Woodson Road (the city’s main drag), one can see the most curious of buildings. Some portion of the Knights of Columbus Hall was built in 1930, and dusty new additions have been plopped into the mix over the decades. The place is now massive, and appears dead to the world, but its ramshackle appearance always stays exactly the same (indicating regular upkeep), and its website shows a full roster of activities. 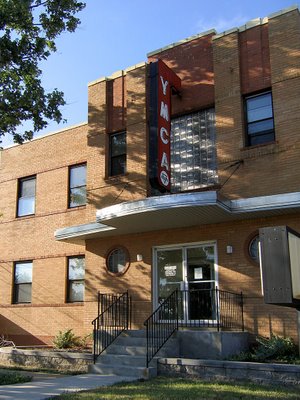 Just up the street, the YMCA sports the Deco Moderate look that was popular in new suburbs of the late 1940s. It gave new public buildings a sense of the modern urbanity but without all the drama. This style holds up well, as it never looks too dated (for those who require contemporary) or too radical (for those who like quaint). This YMCA building went up in 1948, is still in use, and still looks fabulous. 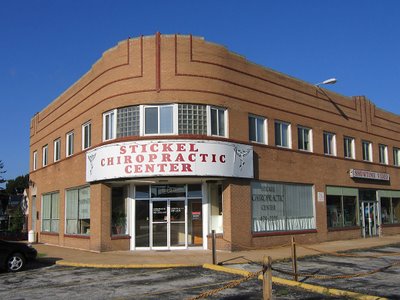 At the intersection of Lackland & Brown Road is this simple and handsome building, built in 1945. The curving corner, a ribbon of tiny windows and the dark brick pinstripes of the second floor give it a bit of a Steamliner Deco feel. There is always another business ready to take over any vacancies in this building, and it’s been this way since I first “met” the building in 1984. This intersection has businesses on 3 sides, but it’s a bit disconnected from the main commercial drags by houses. Meaning, it would have been a natural for this building – this intersection – to decay from natural suburban aging. But it hasn’t. What does Overland have going on that similar towns don’t? 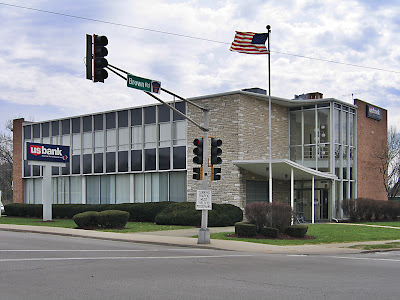 Directly across the street is a building that always tickles me. I mentally refer to it as Googie Van Der Rohe because it looks like a Chicago Mies building accented with a Southern California roadside motel lobby. It was built in 1957 as a bank and remains so, and it looks like that! 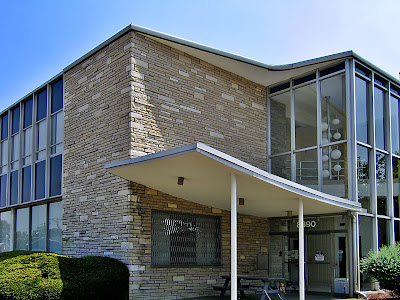 The SoCal Googie looby was, obviously, the main entrance, meant to be accessed by foot, bus or car from the intersection. But in 1967 they moved the entrance to the opposite end of the building when they expanded that parking lot. The “new” entrance still has that afterthought look, and feels cramped because of the makeshift drive-through lanes crowding its scene.

I love that a bench was placed under the canopy, so that employees can lunch and smoke in Jetsons splendor, and that they have to walk quite a ways to get to it, as that door has a chain on it to make sure it stays shut. 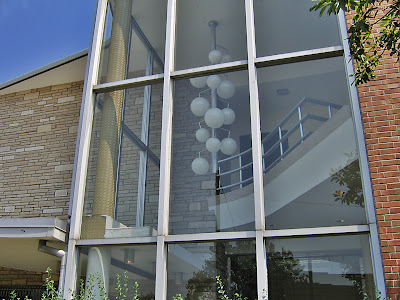 So, the entrance is now useless as such, yet they’ve left it completely intact, with the “crazy man, crazy” light fixture hanging like it’s suspended in prehistoric amber. It’s such a queer thing to have so many different banks move in and out of this building, reconfiguring its guts and alley as banking needs change, yet they leave the essential Mod-ness of it alone. Is it a case of “out of sight, out of mind?” Or that no one bank is ever inside long enough to invest in remodeling the non-essential parts? Or does it cast some sort of 77 Sunset Strip spell over all inhabitants, rendering those who would vinyl side incapable of doing so? 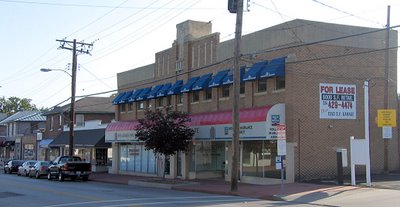 By hanging a U-ey at Lackland & Brown, we drive back toward Woodson Road, hang a right and head straight into the thick of old fashioned Downtown Overland. And it really does seem to have gone out of its way to be old-fashioned from inception. County records show that most of this dense strip of buildings went up in the 10 years directly after WW2, so they built quickly during those last moments in time when pedestrian traffic still influenced how a commercial district was laid out. 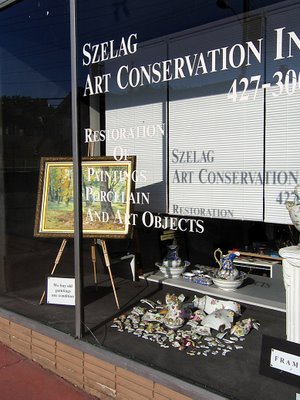 The downtown strip has a few stalwart businesses, remainders from the old days. But, again, each time a storefront becomes available, it gets filled much quicker than these types of commercial districts usually do. And by quicker than usual, I mean that we can cruise the central commercial strips of, say, Normandy or Baden or Glasgow Village and see a chain of vacant storefronts. But not in Overland.

And they have never really had the room to renovate for expanded parking. Sure, they’ve taken down a building or 2 to squeeze in some blacktop spots, but overall, its street parking, and those spots are always filled and there’s always commerce taking place. 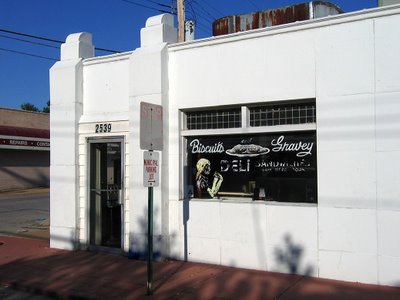 One of the liveliest spots in downtown is the diner, above. By keeping it tiny (572 square feet being a good definition of such) they were able to push the building up against the sidewalk and use the leftover space for parking, which was quickly becoming a bigger concern when the place was built in 1957. 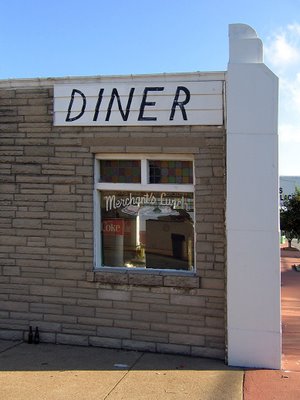 Half of the building is decked out in Pseudo Deco, vaguely reminiscent of White Castles, while the other half is standard Corner Tavern Stone facade. That they were able to cram 2 distinct looks onto so little wall is most impressive. 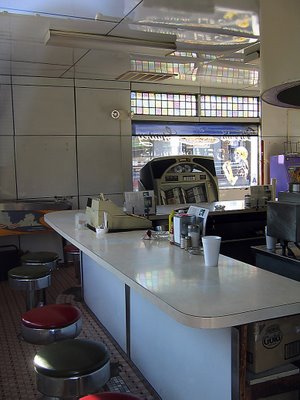 And the interior has barely changed in 50 years.
What kills me is that one can easily walk from Paul Bros. service station (4th picture from the top of this entry) to this diner in about 10 minutes and somehow remain in a Leave It To Beaver world, untouched by the uglier aspects of modern time. And we’re not talking some retro homage; it’s the entire genuine article, unfussy and unconcerned that the diner reeks of decades worth of grease. It’s probably those ancient grease odors that makes the biscuits and gravey (spelled, my lord, with an “ey”) so damn great. 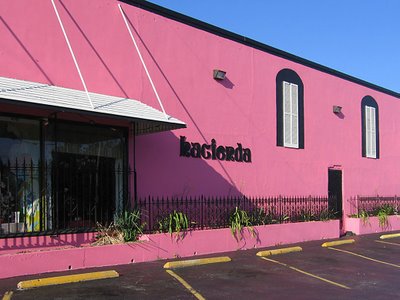 The Hacienda Mexican restaurant has long been a popular staple in the downtown strip, but it hasn’t always been this pink. It used to have a more traditional Northwest County Adobe look. I feel they updated the color to Flamingo Pink to better coordinate with the establishment behind it…

…which has spruced up its Lyndon B. Johnson congressional motel look with some hot sea foam green trim. Built in 1965, they were billed as “garden apartments,” for all doors faced into a central courtyard, much like in Southern California.

Every good downtown needs a dollop of seediness, so this place has become rather transient, in the most romantic sense of the word. The set-up is actually quite nice, but I couldn’t get in any closer for better shots, as the working girls crossing the tiny parking lot were real uptight about someone taking pictures of their place so early on a Saturday morning. I respect free enterprise, so I respectfully moved on.

Leaving downtown proper, we head back up Woodson Road, a couple of blocks south of Page Avenue, to one of my favorite buried MCM treasures. Overland is rather hilly, and note how this gem (above) plays with the topography by tapering a rectangle into the hillside. I love the feel of the windows melting into the ground, and the shades of blue springing out of green grass and blacktop. 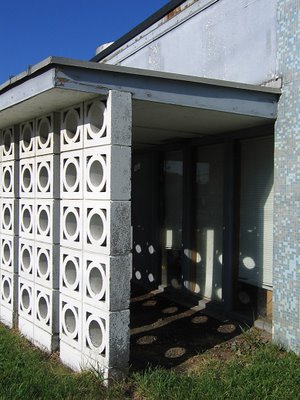 This place was built in 1958, and it’s a perfect model of that year’s modern aesthetic. Tiny tiles of aquatic blues, the concrete block sun screen that throws polka dots amid the shadows, simple planes low to the ground, cool geometry in service to manufacturing prowess. If this building could have been erected next to the Googie Van Der Rohe bank, the story of 1950s American Progress would have been perfectly told in microcosm. 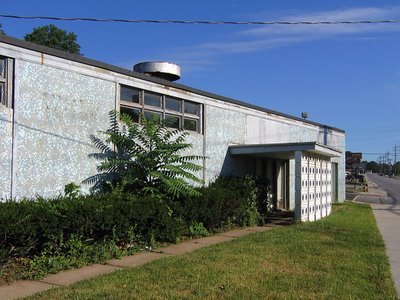 U.S Band & Orchestra Supplies now manufactures and wholesales instruments, and the building serves them well enough that they don’t think about it’s condition. This building needs some help. A good start would be to trim the hedges and kill the weeds, some waterproofing and paint on the faded surfaces. 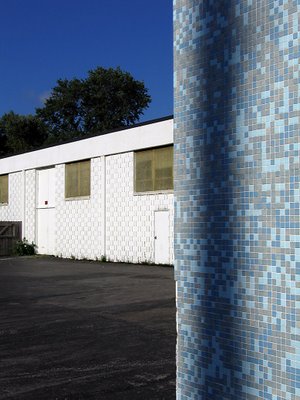 Each time I pass this faded beauty, I have to fight the overwhelming urge to have at the tile with a bucket of Spic & Span and a water hose. Just imagine how those tiles gleam when clean, how this building must have impressed when it first came to the neighborhood. And it could do that once again, but the immediate commercial strip in which this building sits is heading toward the kind of decay that invites future developers to go for Big Box infiltration. Should this ever be the case, the one building that just might save the above gem is… 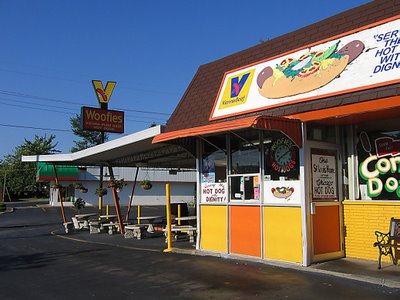 WOOFIE’S! Serving what has been called “the hot dog of the gods,” the building went up in 1955 and is only a dozen square feet bigger than the diner shown above. But this building was dedicated to the car from its inception, so the inside can now concentrate on being a tiny “shrine to the all-beef frankfurter.” It’s clean and bright, and on a brilliant sunny day, Woofie’s contrasted with my blue tile geo gem next door is a sight to break my heart. It speaks to me of all that’s good about America’s mid-century aspirations, and makes me proud that such a unique town like Overland is here for you and me.