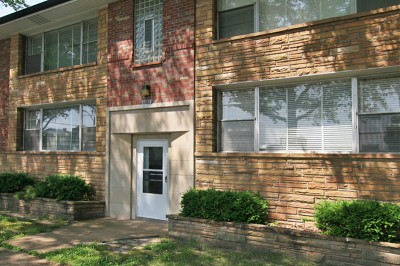 Here’s a typical scene in St. Louis Hills – a mid-century modern apartment building nicely appointed with various stone and brick textures to create a pleasing geometric palette.  I can imagine living here, with the generous fenestration that surely makes the rooms seem comfortably large. But then something horrible happened somewhere along the way. 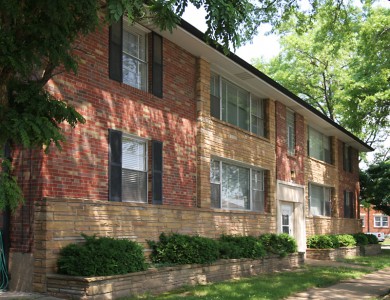 Some misguided landlord decided that the windows on the ends of the building needed cheap-ass plastic shutters! There’s obviously no understanding or appreciation of architectural aesthetics, just some primal urge to bolt plastic where it should not be. This was the final straw of my long-time confusion about – and hatred of – shutters.

There is a specific and finite need for shutters: to control light and air, and/or protection against strong wind, rains and hurricanes. 20th century indoor climate control has taken care of the former, and a finite number of dwellings in coastal areas still need it for the latter. After that, shutters are, basically, the proverbial mustache on the Mona Lisa. And when one insists upon using them as a minor exterior accessory, there is a right way and a wrong way to do it. 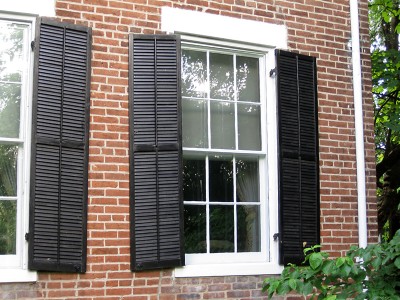 A recent article on Retro Renovation addresses this very topic. “Improve Your Home’s Curb Appeal With Shutters” is much more polite about the topic. The closest author Ted Cleary comes to rolling his eyes is when he writes: “Cheap shutters, which are so common that many people don’t even question the look, can give a flat, pasted-on appearance; authentic ones can make all the difference.” He is then very thorough in relaying the “cardinal rules” rules of proper shutters:
• They must be exactly half the width of the window
• They must convey the believable appearance of actually being usable
• The length must match the window’s length rather than standard lengths available at big box home improvement stores

As shown above on an historic home in Webster Groves, authentic shutters have hinges, and when closed they would completely cover the window. Originally, these shutters would have controlled sunlight while keeping air flowing through in the summer or blocking drafts in the winter, and during a storm they protected the windows from breaking. These shutters are cool because they are authentic. 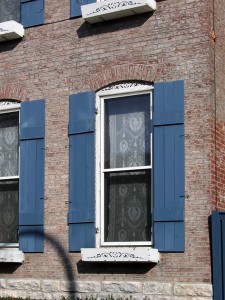 Same goes for these shutters on a Benton Park building. These even have the latches to hold the shutters against the building when not in use. Plus, they are real wood and painted a sumptuous shade of blue that contrasts nicely with the red brick. Well done. 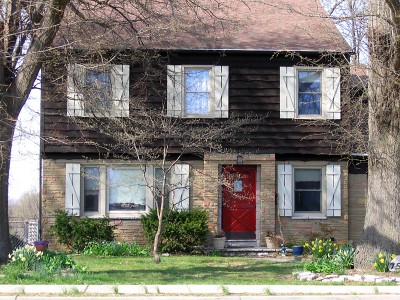 These shutters are not operable, so they are purely cosmetic. But they are the correct size, made of wood with a cute pattern, and their soft cream color serves as a wonderful accent to the overall rustic look of the home, much like the right accessories can really pop an outfit. 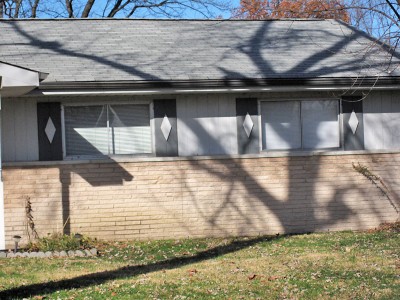 I feel exceptions can be made when shutters are truly thought of as a visual element that adds to the dialog of the home’s design, like these shutters (above and below) on standard-issue ranch homes in Florissant, MO. They are the right length, but certainly not the right width. But these shutters originally attached by the builder in the 1960s have an endless array of jaunty motifs that don’t pretend to be anything other than earrings for the windows. This playfulness is charming, and it was a clever way to address that there was no longer a need for shutters unless they could contribute meaningfully to the glossy modern era of suburban living. 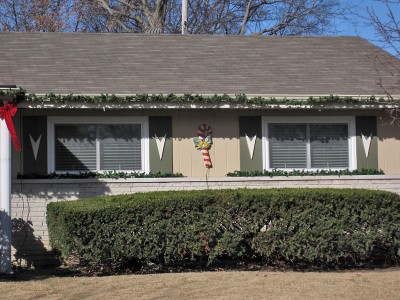 But after that, we have an endless chain of mindless shutter application. Somewhere along the way, shutter manufacturers devised a clever marketing campaign that has kept this product as a normal, accepted accoutrement for the average American home, and I’m guessing this campaign was waged during the post-WW2 building boom when it was becoming apparent they were no longer needed. But as millions of homes were being built across the land, the miracle of mass production created a landmine of financial opportunity for plastic shutter makers, and their marketplace savvy continues to this day. Shutters get slapped on new homes as mindlessly as we guzzle soft drinks, and we seldom stop to consider “why?” 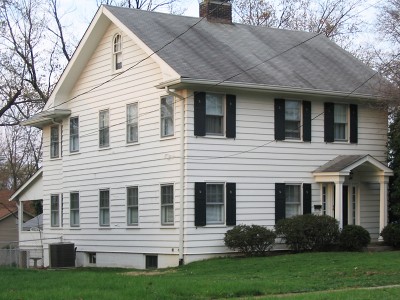 Here’s a common sight: shutters only on the front of the home. Granted, this application in Kirkwood is the proper size with hinges, but it appears they blew the shutter budget on the front, leaving the rest of the windows naked. Meaning, if the big storm comes, only the front windows will survive, and woe onto the rest of the fenestration! 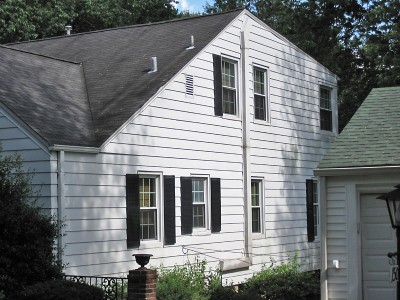 Or we have the mindless application of shutters for shutters’ sake.  Casing for electrical wires serves as a Mason-Dixon Line, though which is Union and which is Confederate is open to individual interpretation.  And this home also covers another common problem… 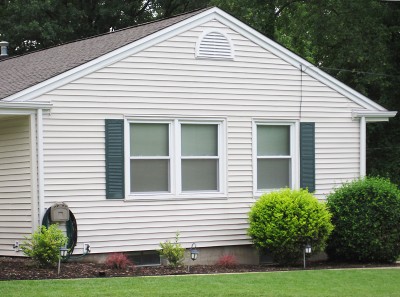 …fit. Proper shutters demand symmetry for operation, but the windows on modern homes don’t always allow for that. So the Pavlovian response of “must have shutters” creates all manner of remedial, lopsided configurations that we tend to accept as perfectly OK. 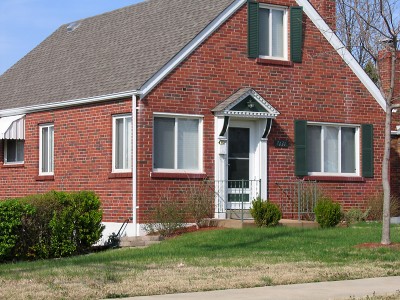 Sometimes the placement of a window on a modern home strictly forbids you to install shutters, like the left-hand window, above. To carry on the theme would require ordering custom shutters. Off-the-shelf vinyl shutters in standard sizes average $35-$50 a pair, so this homeowner was willing to spend, say, $90 to trim two windows, but they were not willing to spend custom dollars for that last window. This seems a wise decision when compared to… 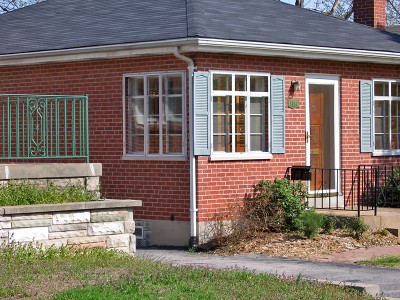 …this house down the street in the same Shrewsbury neighborhood. They purchased off-the-rack shutters and installed them with gusto until the “uh oh” moment. I like to imagine the day of installation, where he started installing on the right side of the house, and that moment of dread when he came to the last shutter on the left – dang, it overhangs! “But I can’t stop now! Screw it! Up it goes.” And now a small section of the downspout is protected from the harsh rays of the afternoon sun. Everything works, if you let it.

But I am also intrigued by that primal urge to shutter. They have somehow been instinctively ingrained into the homeowner psyche as something that must be done. From observing some homes, it’s obvious that no thought beyond “must shutter” has been “thunk,” and they had to create an excuse to smooth over an awkward situation. But it’s this mindlessness that fascinates me. 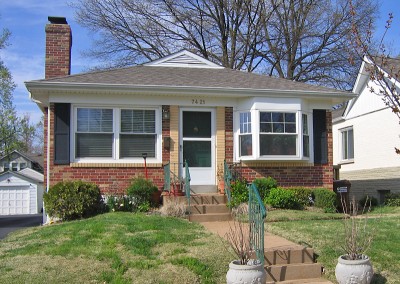 Come the deadly Midwest hurricane, at least one side of this bay window will be spared. Clearly, there is no room or need for shutters on the front of this cute little home, but they were compelled to do so. Which reminds me of a good deed done by a friend who works for a corporate home improvement retailer. This employee once stopped a man from committing mindless shuttering.

The customer had just spent money to have new vinyl siding installed, and so “needed” to replace the old shutters that had been removed during the project. He wanted some help in selecting new vinyl shutters. My friend applied the Socratic Method:
How does your house look with the new siding?
Great.
Even with the old shutters gone?
Yeah.
So if it looks nice without them, why puncture your new siding by putting up new shutters?

One could practically see the light bulb go off above his head as he mulled it over. He then said he needed to think about this, and left the store, shutter-less. Bravo! Score one for aesthetic logic! 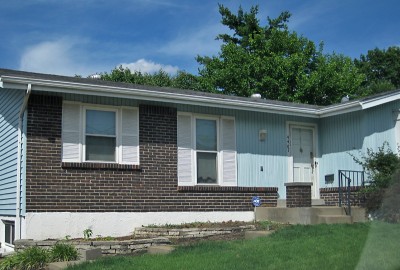 There is a series of ranch homes in the Affton area that have shutters enforced upon them. The original builder inset the windows in a way that created a need for shutters to complete the frame. One can only remove these shutters by investing in larger, custom-size windows to fill the void. Naturally, it’s cheaper to just buy new shutters. So the original financial agreement between the builder and the shutter vendor remains stronger than a homeowners free will to mold the house in their image. 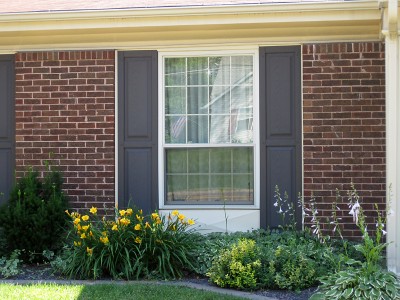 This homeowner stumbled into the rigidity of this design feature when it was time for replacement windows. For whatever reason, they went with a window shorter in length than the original, so had to create new in-fill at the bottom, and it’s not all that bad. But the new shutters still echo the length of the original window; enthusiasm for jerry-rigging goes only so far? 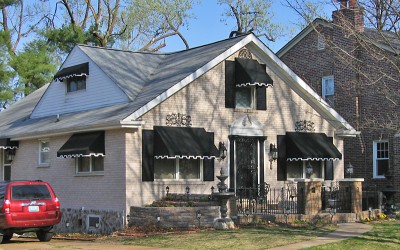 My favorite category of shutter atrocities is epitomized in this glorious example, above: suspenders and a belt!  This one also evokes the feeling of socks worn with sandals. 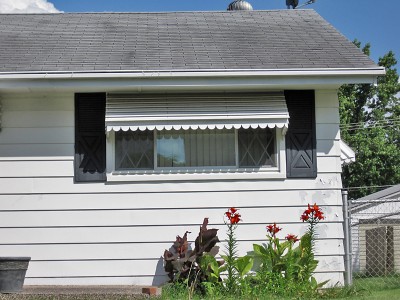 Imagine if car manufacturers included mud flaps as a standard feature on all motor vehicles. Yes, mud flaps do serve an actual purpose on a specific type of vehicle, and mud flaps on a Mini Cooper would cause no harm. But it would ruin the line. And they would require some maintenance. And they would get mangy after awhile. While a large majority of new car buyers would motor on without a second thought about the mudflaps, it’s fair to say that maybe a Jaguar owner would step back one day and realize that the mud flaps muss the essence of their refined car, and yank them off, wondering why they left them on for so long. At that moment, mud flap emancipation would feel so sweet!

Shutters are mud flaps.  If they serve no true purpose, yank ’em off, and see if the house looks better without ’em.

Here’s my Number One With A Bullet favorite shutter catastrophe.  On the second level, much money was spent to create and install vertical versions of the John Waters mustache! 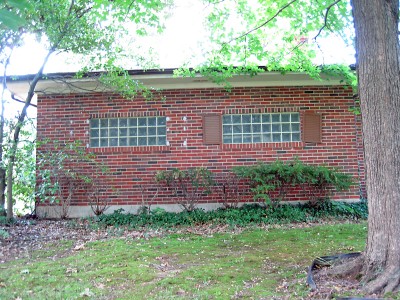 And here’s a good example of comically inappropriate shutters vs. no shutters. Are these homeowners purposely breaking free of the shutter shackles? I’d like to think so, but considering the ramshackle state of the rest of this Webster Groves modern ranch (shutters are hanging loose all over), it appears to be that the house itself is lancing the boils, yearning to return to its original shutterless state.

In the early 20s, I worked for a high-end design build firm who were remodeling a Ladue ranch home whose overt Frank Lloyd Wright design had been buried under several remuddles. The new owners wanted that Wright-ness returned. As I was taking before photos, the man told me about the debate he and his wife were having over the shutters: he wanted them removed because they weren’t original while she wanted to replace them with more appropriate versions. He asked for my opinion. I said, “Why pay hundreds of thousands of dollars to restore this home only to mar it with shutters that were never intended?”  It was silent for a few beats and he replied, “Yeah. Maybe if I agree to buying some Stickley antiques, she’ll back off on the shutters. It’s worth a shot.”

This man is my hero. We need more like him.