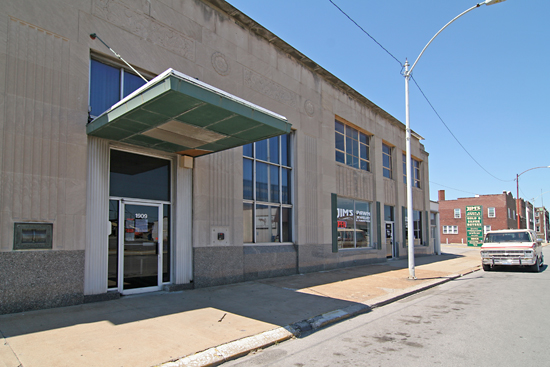 Here’s a perfectly respectable former bank building in downtown Granite City, IL. It’s heartwarming to see it still in use. But let’s take a closer look at the great insult to its dignity. 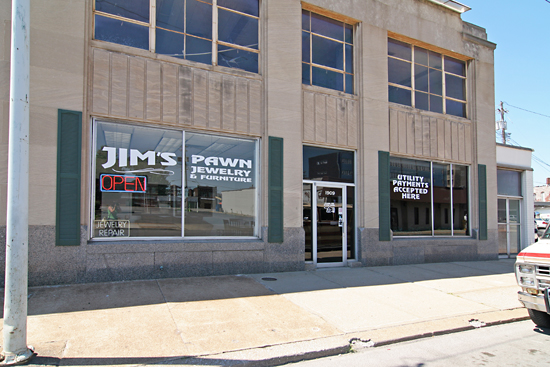 The pawn shop put SHUTTERS ON ITS WINDOWS!  Extreme outrage and towering incredulity at such a moronic move makes me weep, and only because I was with a friend, did I refrain from going inside to ask the following questions:
Why, Jim?
Why not on the 2nd floor as well?
What was your inspiration?
What was the motivation for this expenditure?
How long did you contemplate buying the shutters before swinging into action?
What was so wrong with the building that you feel it required shutters?
Have these shutters benefited your business in a positive way?
In quiet moments, can you hear the building weeping? 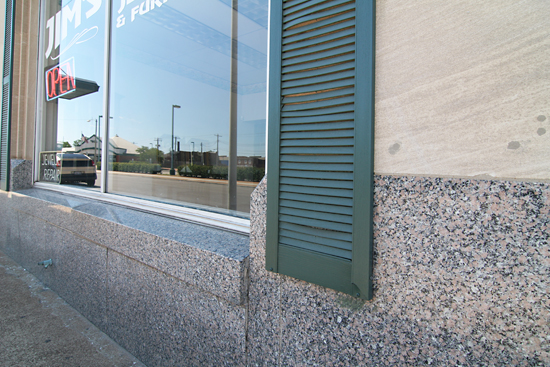 Granite, limestone and cheap ass plastic shutters – breathtaking, really. The thought of how difficult it was to drill through all that solid rock to install forest green vinyl exclamation points just makes this a dubious achievement. I want to make a citizen’s arrest. 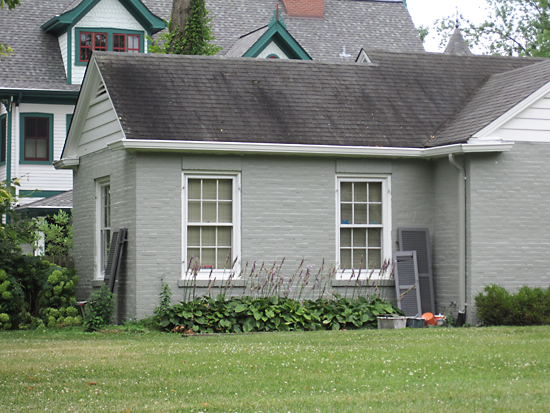 Meanwhile, over in Kirkwood, I was initially elated to see all the shutters removed from this house.

I’ve covered this house before, noting how scary it must be for them to have that bulbous, steroidal Victorian breathing down its neck. Click to see how it looked with shutters.

This street is Teardown Central of Kirkwood, so when this unassuming ranch went up for sale, I was deeply worried. Luckily, someone bought it and obviously intend to keep it, because a sign for the painting contractor is in the yard, and that’s a fresh coat of gray on the brick. 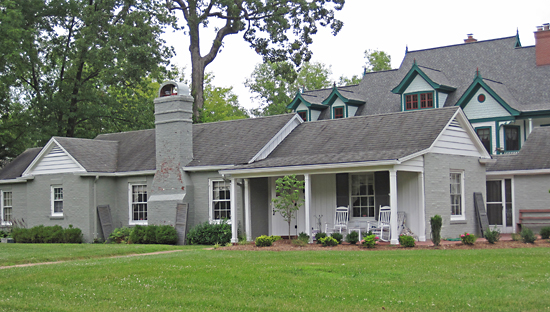 Considering that all of the shutters are resting neatly by their intended, I’m guessing the shutters are going back up. But I want to ask the new owners, “Seriously, does the house look all that bad without them? Maybe live without them for a month and see how you feel about mussing up the new paint job?”

I was overcome with the overwhelming urge to steal the shutters; throw them in the trunk of my car and speed off. But this is Kirkwood, so there’s lots of eyes on the street, and that would be a criminal activity that could land my butt in jail. And as much as I loathe shutters, I couldn’t face being permanently branded as an illogical lunatic. I realized my argument about most shutters being illogical just wouldn’t hold up in court, so I just drove away.

7 thoughts on “Why Shutters? Update 1”