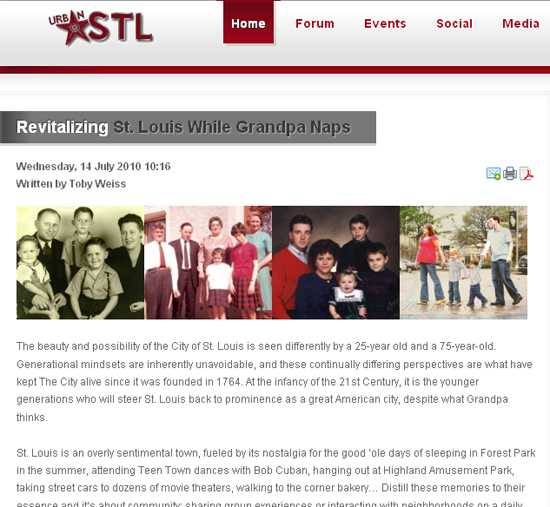 Urban STL does an amazing job of keeping a constant eye on St. Louis and sharing it with us in a quick and concise manner. The site also provides a forum for informal chat about any and every topic, and then they open up their blog to guest writers so that more voices can join in the civic conversation.

To that end, Urban STL just posted this piece that I wrote: Revitalizing St. Louis While Grandpa Naps.

The essay was inspired by having several conversations this summer with folks older than me who questioned the optimism so many of my peers have for the City of  St. Louis. They would counter any positive observations or facts with anecdotes of their former booster-ism quashed by disillusionment. Each of these people were just as confident that St. Louis’ best years were far behind it as I am certain there are great days ahead – and right now!

Rather than thinking they were wrong, I realized we were all right because our perspective is based on our experiences, and that there is no escaping the cultural forces that shape how we react to the world around us.  The older St. Louisans who experienced and lived through the steep decline of our City will naturally have a different perspective than those who are now part of its steady rise up from the ashes.

A mistake that any generation can make is to believe that time stands still, and that how it was is how it shall always be. Or the mistake of being so invested in how it was that they ignore how it actually is, right now. St. Louisans are a very nostalgic bunch and that’s fine, but not at the expense of the present and the future.

Thank you to Urban STL for letting me delve into this topic a greater length. Click here to read it.

RELATED
Another guest essay on Urban STL – Crying Over Spilt Milk: The Suburbs Happened, Get Over It!