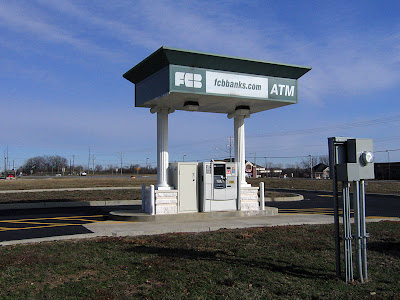 Hwy 157 near Center Grove Road, Edwardsville, IL
This drive-thru carnival literally screamed at me from the highway, prompting a U-turn in the middle of the street to go back and verify that I truly saw what I thought I saw.

The stone bases and the ionic columns are already as preposterous to a drive-up ATM as marbleized stationary is to letter writing. But with its plastic and veneer references to ancient Greek architecture, certainly the bank is trying to denote class and strength and firmness. They carry on the classical column theme on their website. 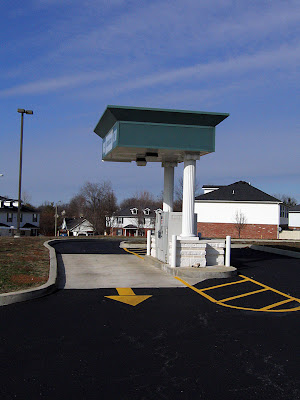 Any visual clues to strength and firmness are completely obliterated from this angle. It looks like that roof is going to crack off and crush the roof of the next car through. It doesn’t take a structural engineer or architect to instinctively recognize that this pretentious and foolish ATM quickly conveys the exact opposite of what was intended by the financial institution it serves. 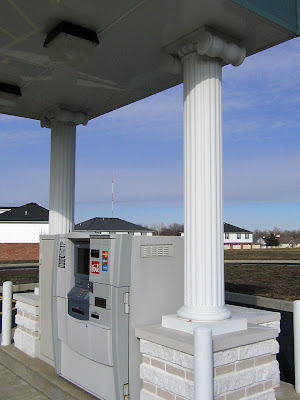 But let’s keep context in mind. This is a part of town that rapidly built-up around the edge of the SIUE campus. The university is the gravity of the area, thus street names copy the entire list of Old English and Ivy League university names. Citizens prize a new village, but a sense of antiquity is quickly needed to bolster the social class anxiety always under the surface in shiny penny new communities. That is why so many of the commercial buildings on this immediate strip slap on all manner of pediments, columns and dentil molding to the flat fronts of their simple brick boxes. The ATM is obediently following through on a hastily devised plan of gravitas through ornamentation.

Paul Fussell well-described this phenomenon in his book Class: A Guide Through the American Status System. He might as well of been speaking of this ATM when he wrote, “facade labors to extort respect, and it is thus one of the most pathetic artifacts, bespeaking the universal human need to claim dignity and high consequence… The middle-class longing for dignity frequently expresses itself in columns or pilasters arguing the impressive weight of edifice… The principle that curves are classier than straight lines operates with columns as understood by the aspirant. Square columns are the lowest; round ones the next highest; round and fluted highest of all.”

As I circled this freak show with the camera, I couldn’t stop chuckling at the layers of absurdity. I wondered about all the people involved with the design and construction of this… did they continually chuckle at how preposterous this concept is? Is there even one customer of this ATM who knows enough about structural basics to feel bemused every time they withdraw from under its lopsided portico? For all these reasons and more, I remain morbidly respectful of The Tackiest ATM Ever!

3 thoughts on “The Tackiest ATM Ever”