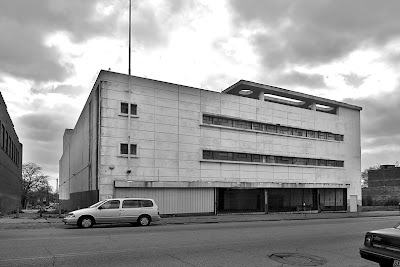 Martin Luther King Jr. Drive between Hamilton & Hodiamont
Wellston, MO
I have touched on this building inside a previous post. If you have ever run across it in your travels, bet it’s seared in your memory. It’s a singular building both in its neighborhood and in our city. Architects travel from out of town to see this Le Corbu-like gem. It’s unique and spacious with plenty of options for future use. That’s why the man who owns it bought it, and that’s why he’s been working to get it registered for both state and federal historic tax credits. The photos you see here are part of the series that I took for the owner’s applications. I did them for only the cost of the prints; wish I could have done it for free. Anything to help this building stand and thrive. And that is now becoming a problem.

The owner keeps me filled in on the struggle between him and his alderman. Let’s keep this story as tight as possible:

In 2006, Alderman Jeffrey Boyd fully supported the Landmarks Association writing the historic register nomination for this building. By winter 2007, it was ready to go before the Missouri Advisory Council, but Ald. Boyd had it pulled from the line-up. Why?

Ald. Boyd had a friend who wanted to buy the building and tear it down. The owner would not sell to someone who wants to tear it down when he’s working to bring it back to life. This pissed off Boyd, who then had it yanked from all board reviews and has since blocked any type of progress on the building. Despite the alderman’s anger, the owner began in earnest to get the building listed and eligible for tax credits to protect his investment. 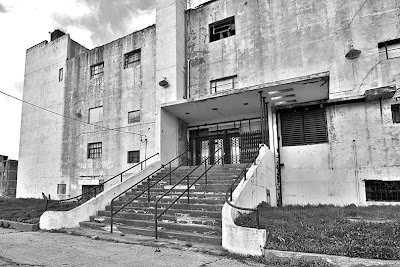 Despite the feud, the owner has placed the building on the February 2008 agenda of the State Historic Preservation Office.

And Alderman Boyd is calling everyone he can to get this nomination yanked, once again. To his credit, he’s been very honest about why he wants it yanked: he wants it demolished.

Some of the local offices he has called flat out refused his request. But there’s a healthy list of local and state offices Boyd has contacted who have yet to weigh in.

They need to hear from people other than Boyd, and they need to understand the basic facts:
An alderman would rather demolish and leave another vacant lot in Wellston than let the building’s owner work to improve it.

Has Boyd explained the logic behind his plan?
Does he have a plan for something to go in its place?
Does he have any other valid reasons why he opposes this building and its owner?
Is this aboveboard business or is this a personal pissing match driven by ego and emotion?

Below are the people you can e-mail with your thoughts about the matter. If this situation bothers you, please speak up. Again, they need to understand more about this building beyond the Owner vs. Alderman struggle. At the very least, illogical injustice needs to be exposed.

11 thoughts on “The JC Penney Building and Aldermanic Ego”