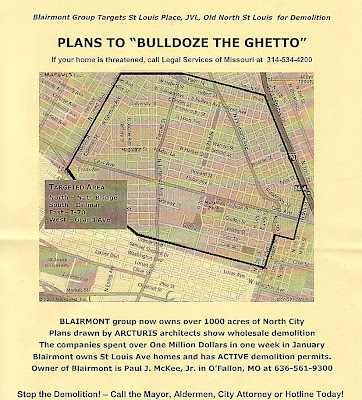 Between the above, and the Bohemian Hill fiasco, I have two questions for the people who run the city of St. Louis:

What century is it?
Where’s you’re civic self-esteem?

Re: Blairmont
I’m pretty sure it’s the 21st century, yet both city & state government is dangerously close to resurrecting 19th century Jim Crow Laws that were completely abolished in the latter 20th century. This potential regression into segregation is just as absurd as it is illegal.

Re: Bohemian Hill
There’s no denying that St. Louis City has come back to life, and it’s the unique aspects of this city that have been its resurrecting life force. Yet our civic leaders still carry on as if we have to beg and grovel to every Daddy Walgreens to have any chance at survival. Rather than plan and deal with a sense of purpose and confidence, their continual cave-ins to homogenous, corporate pressure just reveals a lack of respect for themselves, their city and the citizens who voted them in.