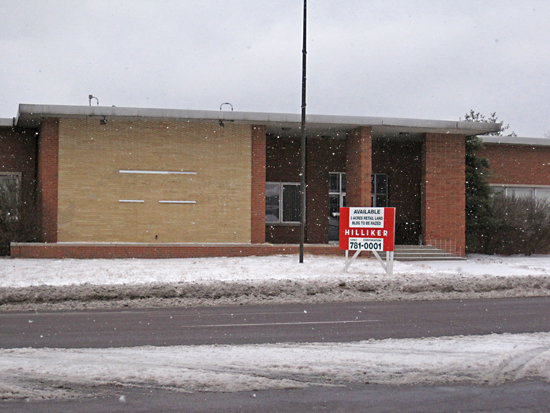 The mid-century building that was formerly an office for the Metropolitan Sewer District (they exited the tax records in 2008) is now owned by St. Louis City’s Land Clearance for Redevelopment Authority (LCRA). It is now also for sale. That sign, above, reads:

The listing firm is very clear that everything must go, not even bothering to mention the building. Instead, they tout the land’s desirability for retail. This land butts right up against the north side of Hwy 44. If you can picture this immediate area, can you also picture exactly what type of retail that you would use would go in there? Even with all that traffic going by, would Trader Joe’s  – or even Walgreen’s – think it’s a desirable site?

While it’s not the most spectacular of the mid-century modern stock that lines both sides of Hampton Avenue from Interstate 64 to where it ends at Gravois, it is a handsome, if unassuming, building. Because it’s now owned by the LCRA, info about the building is off-line, but I’m guessing from its corporate-patron lines and the other buildings around it that it originates in 1958-1961.

So it may not be a building that architectural historians will fret over, but it does beg the question:
Aren’t we yet past the automatic tear-down mentality?

This country is far too cash-strapped and unstable to still be engaging in such a wasteful mindset that it’s easier to tear down existing and build new. Whose got that kind of money anymore? Sure, a new developer could save a bit because someone else will foot the demolition bill, but where are the developers with the means to use this 3-acres of land for retail right now?

It is highly possible that in the last 2 years the LCRA did try to find new buyers for the building, and see this new tactic as the most logical way to go. But everything is on hold, everything has been reset, and the 2008 way of thinking about buildings and real estate is antiquated and irresponsible. If minimal mothball upkeep is done to buildings like these, there is a chance that sometime in the next 5-10 years there will be a start-up business or industry that would love to have a building like this in this location.

I realize gambling with City money is undesirable, but they gamble all the time with tax incentives and handouts to corporations that don’t need it, so what kind of damage comes from letting it breathe a bit and seeing if it would sell as is? If a developer comes along and says they want to take it down, then fair enough. But to assume the building has to come down for the land to be desirable is just so, so 1997. And no one can afford to be living in that kind of time warp.

Thank you to Jefferson Mansell of Landmarks Association for the heads up about the status of this building.

6 thoughts on ““Bldg To Be Razed” on Hampton”