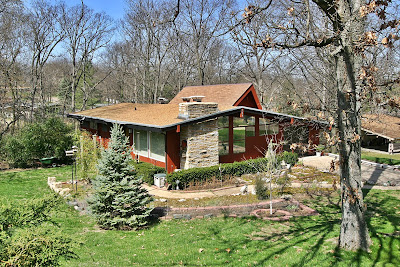 Craigwoods Subdivision, Kirkwood MO
While taking a new shortcut to Big Bend and Interstate 270, I looked down into a valley along Craig Road and saw a storybook village of mid-century ranch houses. Because it was the end of winter and the trees were bare, the houses were plainly visible. Once the trees are fully in bloom, the houses are hidden under a sylvan umbrella. 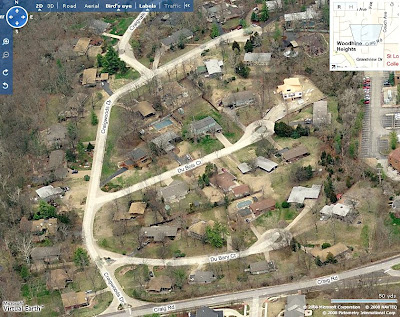 Craigwoods is a 4-street tract tucked into a bowl behind St. Josephs Hospital. Kirkwood is known for a large stock of picturesque historic homes, though it’s actually far more eclectic than popular notion. There are several decades worth of custom homes built in popular styles of the day, with quite a lot of mid-century and post-modern homes resting peacefully next to quintessential Kirkwood historic architecture. 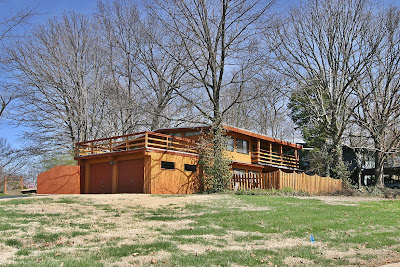 This small but rambling subdivision was built from 1953 to 1955. Houses range from 1,300 – 3,000 s.f. Many of the homes still have the original owners living there, and when listings for them do appear, they sell quickly. 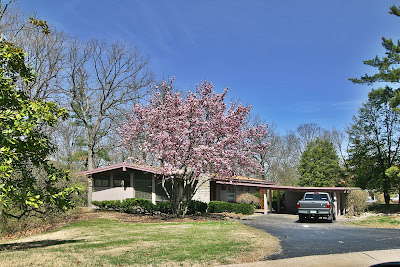 Lately, Kirkwood has been battling a teardown plague, but as of this writing, there are only 2 instances of new in-fill housing in Craigwoods. Both are large, multi-story jobs inappropriate to the horizontal neighborhood, but because the lots are large, hilly and tree-filled they don’t stick out as jarringly as is usually the case elsewhere. 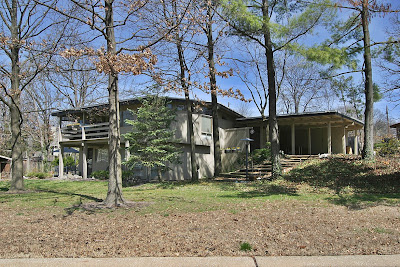 Because the subdivision is so hilly, there are many split-level ranches, which then provides more opportunities for outdoor terraces, usually over the multi-car garage. One characteristic of the uniquely American ranch house style is the attached garage. But rather than the garage eating up half the facade, the ranch style originally found ways to discreetly tuck it into the design so it didn’t call too much attention to itself. Moving it to the backside of the house was a popular option, and made more sense for families. Since everyone was in the backyard anyway, all the stuff needed for outdoor living was neatly stacked into the garage.

That was the original beauty of the ranch style: a new, informal residential architecture that took into account how American families actually lived after World War 2. 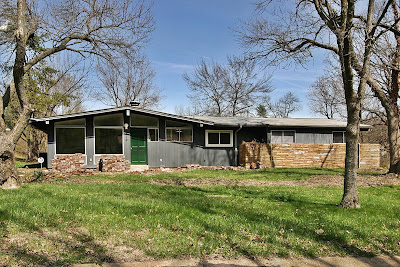 Here’s a house in Craigwoods that’s undergoing renovation. So far, they appear to be staying true to the original feel of the house.

A good friend of mine is a buyer’s agent specializing in finding mid-century homes for those so aesthetically inclined. She has noticed that buyer’s have a tendency to become disenchanted with the houses she shows them because so many of them have been remuddled and would require remodeling to return them to their former glory. In general, most every new owner of an existing home has to do some form of renovation; that inevitable expense is usually factored into the overall cost of purchasing the house.

But for some strange reason, some who want an MCM ranch house hold onto the unrealistic expectation that they will easily find an untouched gem and simply move their stuff into a dwell dollhouse. I think this speaks more to a certain lifestyle mindset than the reality of buying any type of house over 20 years old.

The typical American ranch home is now – or very close to being – officially historic. One must put on their “historic rehab” thinking caps and undertake the adventure. Here’s a thoroughly illustrated example of a family who did just such a thing with just such a house. 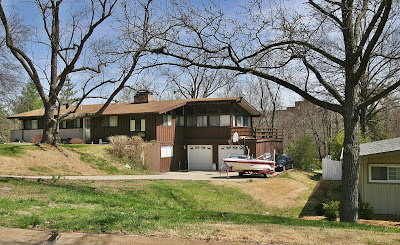 I ran across a term new to me that describes Craigwoods: Contractor Modern. From Lester Walker’s indispensable book American Shelter:

Contractor Modern, Countrywide – 1955
This style has been called the true twentieth-century vernacular mode. Its compactness and simplicity and its use of many stylistic features dictated by the experience of builders and contractors made it the most commonly used style for the thousands of subdivision ranch houses being constructed all over America…. The contractors used (Frank Lloyd) Wright’s ideas but built expediently with factory-made, often synthetic, materials, such as imitation plastic stone, pressed fiber imitation wood siding, and metal shutters and siding. 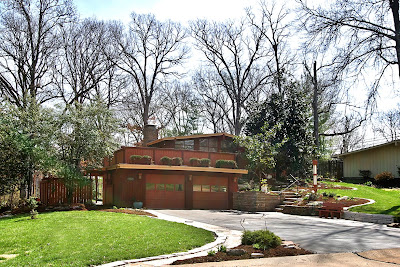 From a fascinating New York Times article in 1982, suburban homeowners (who put style 9th on the list of important factors in choosing a house) chose the ranch as the third most popular option, perceiving it “as economical, modest and simple.” Fast-forward to the financially-and energy-challenged 21st century, and “economic, modest and simple” seems once again a virtue.