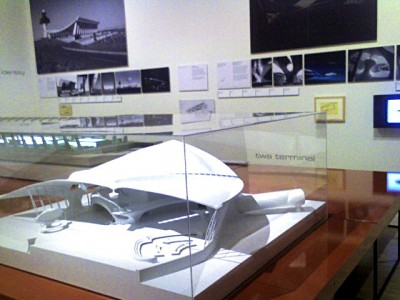 The Kemper Art Museum is my new favorite place for wallowing in mid-century splendor. Their new exhibit on Eero Saarinen is even better than Birth of the Cool, and it is an embarrassment of riches to be able to say that.

As always, taking pictures (or leaning) in the Kemper is strictly forbidden and studiously enforced, so I can only share with you these crappy cell phone shots.  Shown above are architectural models of the TWA Terminal and Dulles International airports! Below, a color rendering Eero did of one of the TWA lounges!! And this is what is in just one corner of one room!!! 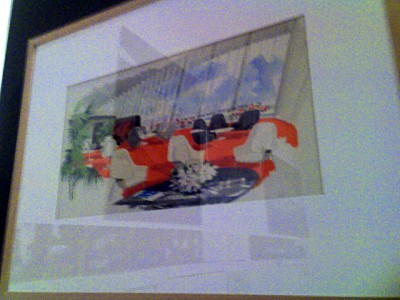 The exhibit is very thorough without being ponderous, and displayed so that one can skim lightly and take away useful tidbits (Eero could write with both hands at the same time and write backwards) or really dig in and start to feel what it was like to work with him as he created and refined an idea.

Everything the man touched conjured a new design reality, and this energy reverberated well past him to affect and elevate those who brought his creations to life.   Look at the photos of the TWA Terminal or the Ingalls Hockey Rink during construction and be blown away by the intricate wood forms the men built to mold the concrete.  Marvel at new fabrication tricks invented to create structural panels for the IBM Research Center building.

There are original sketches of his iconic tulip chairs within one room dedicated solely to his furniture designs.  There’s an 18-minute documentary about Eero’s life and work created just for the exhibit.  It is easy to get lost for hours in this exhibit, but luckily it is in residence until April 27, so there’s plenty of opportunities to do it piecemeal, or just keep gorging on this architectural buffet.  Kemper is open most all times you need them to be open, so there’s no excuse to miss it.

Here’s a quick blast of photos from the exhibit.

Here’s a short video about the exhibit.